At the event, the corporate brass spoke of “appointment TV” and “destination comedies,” but Jimmy Kimmel cut right to the chase.

By Rosemary Feitelberg and Bridget Foley on May 15, 2012
View Slideshow 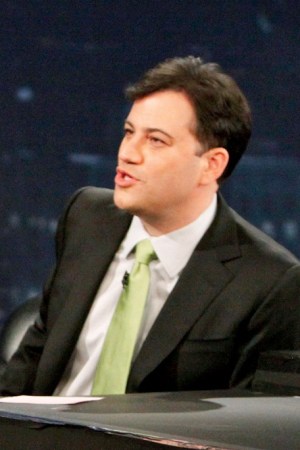 UPFRONT AND PERSONAL: At ABC’s upfront Tuesday afternoon, the corporate brass spoke of “appointment TV” and “destination comedies” while addressing the packed house of potential advertisers and agency reps assembled at Avery Fisher Hall in Manhattan. They also worked in some laughs. Said Anne Sweeney, cochair of Disney Media Networks and president of Disney/ABC Television Group, referencing a famed network franchise, “Our bachelors may not stay engaged, but our audience does.”

In the midst of the introduction of the fall schedule, Jimmy Kimmel cut to the chase. “We know you’ve got $9 billion to spend this week, so don’t try to get all cheapo Secret Service-y with us,” he said. “Just give us the money and nobody gets naked until we agree on a price.”

Nearing his 10th anniversary with the network and having just beaten Jay Leno’s “Tonight Show” in the ratings for the first time, the talk show host was introduced with a star-studded video featuring Brad Pitt, Matt Damon, Cameron Diaz and Kim Kardashian, among others. Tom Cruise asked, “It’s Jimmy? I’ve been calling him Timmy.” Kimmel, who will host this year’s Emmys, took some amusing swipes at the competition, including “big shot” CBS, which, he said, has “its finger on the pulse of Americans with almost no pulse.” About Fox’s “The X Factor,” he mused that “no one knows talent like [judges] Britney Spears and Demi Lovato.” He then saluted Paula Abdul, “the Rosa Parks of bipolar talent show judges.”

Kimmel didn’t spare his own employer, referring to a show highlighted at last year’s session. “‘Work It’ — you know we were kidding about that, right?” he asked. As for the BBC’s unsuccessful attempt to poach Entertainment Group president Paul Lee: “ABC has something the BBC will never have — dental.”

Plenty of the network’s stars showed up to charm the audience. Sofia Vergara of “Modern Family,” Emily VanCamp of “Revenge” and Ginnifer Goodwin of “Once Upon a Time” each appeared with other cast members to introduce various video montages. The presentation closed with a performance by three headliners from the upcoming “Duets” — Kelly Clarkson, John Legend and Robin Thicke.

As for the new programming, Lee talked up, among other shows, “666 Park Avenue” starring Vanessa Williams,Terry O’Quinn and Rachael Taylor; “Nashville” with Connie Britton and Hayden Panettiere; “The Family Tools” with J.K. Simmons; “Mistresses” with Alyssa Milano and Brett Tucker; “How to Live With Your Parents for the Rest of Your Life” with Sarah Chalke, and “Malibu Country” with Reba McEntire and Lily Tomlin.

Executives also noted some of the talent behind the new offerings. “Zero Hour” is written by Paul Scheuring of “Prison Break”; “Nashville” is from “Thelma & Louise” writer Callie Khouri; “The Neighbors” is inked by Dan Fogelman, and “Red Widow” is by Melissa Rosenberg, screenwriter of the “Twilight” franchise.

The upfront was followed by a party cohosted by Entertainment Weekly, at PH-D at Dream Downtown, where the security guys took their jobs seriously. One guard barred Katie Couric from entering the VIP area because she didn’t have a hand stamp. While some ABC staffers looked horrified, Couric merely shrugged and circled back to get stamped. “I don’t usually go clubbing,” she said, explaining her procedural faux pas.

Upstairs, the New York Post’s Cindy Adams sat on a terrace banquette, notebook ready. Adams inquired about the origin of Sweeney’s black-and-white color-blocked sheath. “Jason Wu.” “Did you buy it?” “At Bergdorf’s,” Sweeney replied. “I buy everything. I have to.” Adams herself was well-accessorized, flamboyant pearl pin at her neck and, on her finger, a great big New York Yankees championship ring, a gift from George Steinbrenner.

Williams, Milano, VanCamp, Krysten Ritter and Josh Bowman were among the ABC actors who attended the party.

Williams stars in the Sunday night drama “666 Park Avenue,” about a tony apartment building run by a man who seems to be Old Scratch himself, played by O’Quinn. “We’ll see,” she said when asked how scary it will get. “‘Rosemary’s Baby,’ ‘The Shining.’ We’d like to be even more seductive.”