The campaign was shot by Matt Jones and styled by Deb Watson. 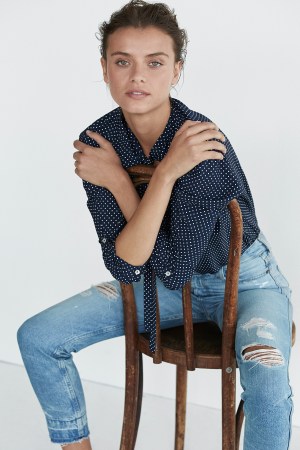 LONDON — Abercrombie & Fitch Co. is changing out of its old denim — and stepping up the fashion quotient with a new collection and accompanying ad campaign. It will break in London’s Evening Standard newspaper on Tuesday.

The brand is set to unveil a collection for pre-fall that includes a diverse range of fabrics, washes, styles and fits aimed at customers in their Twenties and older, rather than teens.

“Denim has always been a part of our brand heritage, and we have put together a collection inspired by current trends and heritage pieces. We are listening to our customers, and believe they will love the new collection,” Ashley Sargent Price, creative director of marketing for Abercrombie & Fitch Co., told WWD.

She said the company has finalized its brand positions and “has started to filter that thinking into our marketing campaigns.”

The denim launch comes with an ad campaign that was shot in New York by Matt Jones and styled by Deb Watson. The campaign aims to telegraph a “more sophisticated” point of view, according to Abercrombie.

A film, titled “The Blues,” featuring a song by Bo Diddley, the late R&B and blues musician, will accompany the new ads.

The collection includes a jumpsuit, cropped flares and wide-leg boyfriend silhouettes. The classic skinny, flare, straight-leg, boyfriend and girlfriend styles are still part of the mix, and come in an array of hues and finishes.

For men, there’s an emphasis on stretch fabrics, while new styles include a super skinny and a raw selvage. The denim collection also includes fleece, outerwear pieces, a denim jacket and a peacoat.

Abercrombie’s latest outing comes in the wake of sister brand Hollister’s new and unconventional denim campaign that features more than 30 teenage customers dressed in jeans and expressing personal thoughts and feelings. That campaign, called #HCoJeansMovement, launched last month and will run through August.

The Standard will break the Abercrombie campaign later on Tuesday, and it will also appear in Elle, Marie Claire online and InStyle online.

The new denim collection and campaign come in the context of bigger changes at the company, which has been working at narrowing its losses and honing its offer. For years, teens had been driving double-digit sales, but those customers are now opting for cheaper fast-fashion brands.

In May, Arthur C. Martinez, executive chairman, said an updated concept store format is also in the works at Abercrombie, with the first new units set to open later this year. He said the focus would be on consumers aged 20 years and up, with a “grown-up feeling in the store.”

In May, after months of management changes, the company named Stacia Andersen brand president for Abercrombie, and Kristin Scott the president of Hollister. Both report to Fran Horowitz, the company’s president.

Horowitz has said the key components of the company’s new strategy are being customer-centric; delivering compelling and differentiated assortments; defining a clear positioning for the brands; optimizing brand reach and channel performance; improving efficiency, and reducing expenses.

The company said for fiscal 2016 it is expecting a challenging second quarter, but improvement in the second half. It plans to open 15 stores, with 10 in international markets, primarily in China. It also plans to open six outlet stores, and close up to 60 stores in the U.S. as leases expire.