On Tuesday night, the names came down the red carpet, as usual, in pairs: Claire Danes in Lanvin. Tilda Swinton in Celine. Kristen Wiig in Stella McCartney. 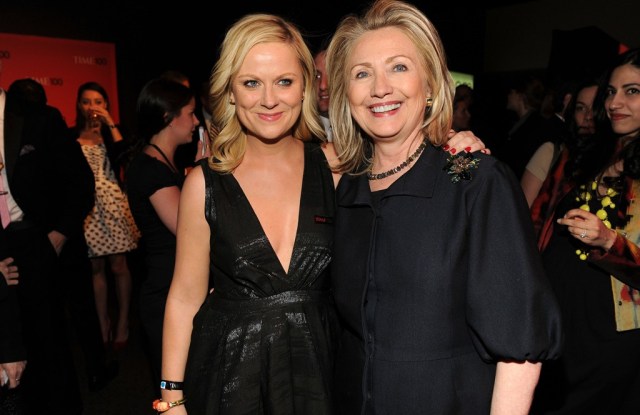 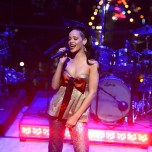 ABOUT TIME: At the Time 100 gala Tuesday night, the names came down the runway, as usual, in pairs: Claire Danes in Lanvin. Tilda Swinton in Celine. Kristen Wiig in Stella McCartney. Rihanna and Tyra Banks both made late entrances in similar magenta Marchesa gowns. In a gesture that likely hasn’t been used for self-promotion so successfully since pre-War Hollywood, supposed billionaire Spanx founder Sara Blakely lifted her blue gown up her calves to reveal that, yes, she was indeed wearing her signature product.

Barbara Walters remarked that she matched both the red carpet and Time’s red backdrop in her coordinated red shoes, red shawl and red dress. “It’s old Bill Blass,” she said. “The best thing about it is that it still fits.”

Mia Farrow, in a long black jacket and black pants, didn’t know who designed her outfit. She was more attached to the pins on her lapels — which included the flag of South Sudan, the American flag and a red ribbon — and a protective amulet made of part of the Koran she wore around her neck. “This was given to me in 2004 in Darfur by a woman named Halima. Now I didn’t want to take anything from her,” Farrow explained. “She had been wearing it when her village was attacked….She was holding her baby in her arms, and they tore her baby from her arms and bayonetted him along with three of her five children on that day before they raped her.” She said she hasn’t taken it off her neck since receiving it. “It’s changed my life. That’s the most influential person I’ve met, I think,” she added.

The mood inside the party at Jazz at Lincoln Center was a bit lighter. Amy Poehler, Aubrey Plaza, Wiig and Aziz Ansari were cracking jokes with Seth Meyers while Danes and Swinton caught up over drinks at the bar. Jeremy Lin had a stream of admirers wishing him luck.

Arianna Huffington, on topic as usual, said that the most influential person in her life this year was Susan Cain, author of “Quiet.” “I’ve been kind of obsessed with the need for us to disengage, maybe because I’m used to being always online, so I appreciate even more how dangerous it is if we never learn to unplug and recharge….When I sleep, I put all my devices in another room to charge,” Huffington said. “I have four BlackBerries, one iPhone, two iPads.”

In addition, Huffington said, “We’re launching — something you would love — called the GPS for the Soul. It’s a way for us to identify our stress levels and course-correct. You would download the app, you would tap on the stress sensor, and it would give you your heart rate, breath rate, blood pressure. And then you would program it with the things that help you de-stress.”

As she stared down the cameras in her blue lace Nanette Lepore dress, Huffington didn’t appear to be in need of any GPS for the Soul herself.