With his first issue set to debut, the editor in chief talks about his vision for the magazine. 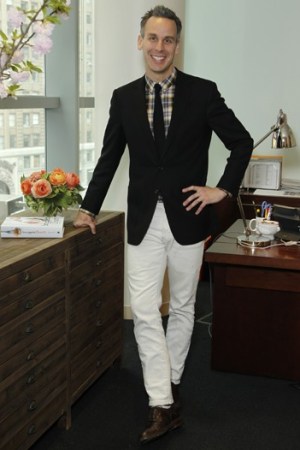 NEW YORK — Adam Rapoport’s first cover as editor in chief of Bon Appétit features a simple bowl of pasta al pomodoro with grated parmesan. It’s a classic dish, one that certainly doesn’t signal a major rethinking of the title.

Which is precisely the point.

“This is a magazine with a 1.5 million circulation,” said Rapoport, who joined Bon Appétit in November from GQ. “This is no V Man or Visionaire. The first issue is not going to change too much. We want to retain readers and win new readers. I don’t think you’ll get everything done in one issue.”

During a breakfast of buttermilk biscuits, eggs and avocado at Peels on the Bowery, Rapoport maintained the suspense as long as possible before revealing the issue. First he talked about the overhaul, about hiring new editors (Christine Muhlke from The New York Times Magazine, for example) and how Bon Appétit will stand apart from a crowded category of food titles that seem to find success as of late, from associations with foodie celebrities and reality TV. He said his magazine’s positioning is solid, tested recipes; cooking techniques and, of course, beautiful photography.

“If you don’t have the magazine around a month from now, it’s OK because you’ll have the skills you need from the magazine to put together a meal,” he said. “We want to do more than teach people to read a recipe.”

But is that enough these days? Food & Wine has benefited from its association with Bravo’s “Top Chef,” as do Rachael Ray and Martha Stewart, with cross promotion between their respective TV shows and magazines. Hearst’s Food Network Magazine, which encourages readers to “cook like a star” with New York’s first girlfriend, Sandra Lee (and even Eva Longoria on the cover), was up 5 percent during the last six months of 2010 at the newsstand. Bon Appétit was down 27 percent during the same period.

“We should be selling more on the newsstand and making it pop more,” Rapoport said.

The title draws an overwhelming portion of its rate base from subscriptions, but readers have spoken at the newsstand and what’s clear from the magazine’s decline there is that they appear to like a side of celebrity with their pasta al pomodoro. Perhaps that’s why Bon Appétit’s next cover will be Gwyneth Paltrow, as reported by the New York Post.

Rapoport said publishing director Bill Wackermann is also exploring TV opportunities for the magazine. “These days, you’re not a magazine editor as much as a brand manager,” Rapoport noted, ever careful to separate Bon Appétit from the pack yet speaking in the jargon of the modern-day magazine editor who now use the word “brand” as easily as they once proclaimed “editorial.” “I don’t want to make a magazine where chefs are treated as celebrities,” he said, a statement that definitely goes against the tide. “Chefs are incredibly talented, knowledgeable people that we are lucky to have access to but what we’ll do is take their techniques and adapt for the home cook. How to make pasta like Mario Batali or an omlette like Daniel Boulud.”

Magazine editors, especially at big companies like Condé Nast, are always balancing demographics and being mindful of who the reader is while trying to expand and attract new eyes. Right now, that reader (who is overwhelmingly female) has a median age of 49 with a household income of nearly $100,000. Rapoport’s unspoken mandate is to broaden that audience and he wants to draw more men and readers from the food blogs, as well as from its newly redesigned Web site.

“We need to tap into popular culture and have a buzziness,” he said. “I don’t want to get away from the foundation of it all — time-tested cooking advice — but we need to have a relevance for right now.”

He mentions an exclusive excerpt in the May issue with Prune restaurant owner Gabrielle Hamilton, who’s written a book that many consider the next “Eat, Pray, Love,” as well as a first look at David Chang’s new iPad app. Tapping into his fashion roots (before Bon Ap, he was the style editor of GQ), he also has a piece about cooking at home with the Missoni family.

Everything is more service-driven and the GQ voice is there on a layout reminiscent of New York magazine. Headlines are punchy and fun. “How to drink like an Italian,” and “The real baconator,” for a story about bacon cheeseburgers. Colors for this, the “Italy issue,” are minty green, peachy orange and lemon yellow, the colors observed during an afternoon spent in Portofino. The back page now asks a celebrity a food-related question that must be answered on a cocktail napkin. For May, comedian Aziz Ansari wrote in red Sharpie about how Los Angeles needs to expand its food truck scene to food trains. “Maybe the people at Keste or Grimaldi’s in NYC can figure that out,” he joked.

Rapoport has eschewed the traditional editor’s letter photo (which he sat for, but hated) for an old black-and-white profile shot taken during a trip to Italy by GQ’s Fred Woodward. For future issues, Rapoport has more photographers traveling to locations to shoot stories and he’s hired a few notable ones, such as Carter Smith, Peggy Sirota and Marcus Nilsson. “If you want to be competitive you can’t just shoot everything in a studio. You can’t fake Corsica or Sicily,” he said.

In terms of the business, you also can’t fake advertising and the May issue has some heft. New publisher Pamela Drucker Mann’s first Bon Appétit is up 25 percent, with new business from Maybelline, Pellegrino and Kraft Foods. The June issue is up more than 40 percent.

Prior to the May issue coming out, Rapoport and Mann have been trying to build buzz, from closing down Rao’s for a private party last month (a first for the famously hard-to-get-into East Harlem establishment) to holding Rapoport’s debut party next week at glitterati bistro Minetta Tavern. He’s invited a small group of foodies and bold faced names but he declined to reveal the guest list.

He’s getting ready to celebrate May but, in reality, he’s already closing June and working on July. “I’m always guessing, second guessing,” he admitted. “I’m more or less happy with it [the May issue]. Actually, I’m thrilled with it. Superexcited and love the way it turned out. Monthly magazines take a while for things to come together.”

And he’s certainly under some pressure. He recalls a recent e-mail exchange with Condé Nast editorial director Tom Wallace seeking Wallace’s thoughts on a cover choice. While Wallace stressed Rapoport was firmly in charge and could do with Bon Appétit what he wished, he added a warning: “If you ask for opinions you will get them and if you screw it up you will have to answer to that, too.”