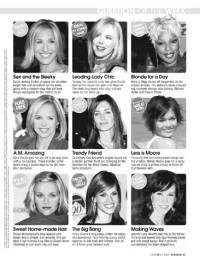 NEW YORK — In the hyperactive world of celebrity-obsessed entertainment weeklies, there’s no rest for the wicked. Barely has US Weekly had time to savor its newfound success than In Touch is revving up for an Oct. 28 launch. Stephen LeGrice, executive editor of the Bauer Publishing title, outlined the new weekly’s daunting mission: to out-perform People and US Weekly in sheer celebrity voltage. “We’re not daunted by US Weekly,” LeGrice said. “They’re doing quite well, but we’re putting together a much stronger package. While US tends to concentrate heavily on fashion, we plan a more comprehensive approach involving other issues of interest to women, such as health.”

LeGrice indicated that staff defections and poaching in the US Weekly/People/In Touch nexus are reaching cold war espionage proportions. “We’ve hired several former People staffers; meanwhile, you’ve got US going after People’s West Coast staffers, and we’re after US’s people,” he said. “In fact, I think Bonnie Fuller’s the only person at US we haven’t spoken to yet.” In addition to hiring Nadine Mendoza, formerly of People’s L.A. bureau, as senior writer and Joseph Cavalieri, formerly associate art director for People specials, as art director (although Cavalieri resigned last week, claiming he

wasn’t “working on a high quality-looking magazine,” according to sources), In Touch has reached across the pond for its latest recruits, including Dan Wakeford, who is leaving his job as news editor of Heat magazine to take over the same position at In Touch. Other British recruits include Nadia Cohen, formerly a showbiz writer at The Daily Mail, and Christine Smith from the Globe. Both are joining In Touch as senior writers. In Touch has also tapped Oscar/Emmy pundit Tom O’Neil, who appears frequently on E! and Access Hollywood, as senior editor. Based on this personnel profile and mock-ups provided by In Touch, WWD has put together a schematic equation of what In Touch might look like.

Heat: Insiders contend that this celeb-obsessed British weekly has already served as a model for Bonnie Fuller, though US Weekly denies it. “Bonnie Fuller reads other magazines voraciously, including Heat,” said a US Weekly spokesman, “but at the end of the day, she’s mainly influenced by Bonnie Fuller.” Given that In Touch has enticed Heat’s former news editor to relocate from London to its New Jersey offices, the mag may just end up looking like an American version of Heat — only with less Patsy Kensit, and David and Victoria Beckham coverage, which would only be a good thing.

The Star: Don’t forget that In Touch belongs to the Bauer Publishing empire, which rides high on supermarket checkout counters around the country. (Bauer Publishing’s flagship title Woman’s World derives 95 percent of its paid circulation of 1.7 million from single-copy sales.) In Touch’s edit-to-ad ratio of 80:20 makes newsstand success a sink-or-swim issue, and In Touch has already confirmed 80,000 racks at supermarket checkout stands and mass-market retailers like Wal-Mart, as part of an initial 1.5 million-copy print run (in marked contrast to its modest rate base of 250,000). Based on preliminary editorial mock-ups, expect the new title to be more down-market looking than Heat. Finally, The Star was the former home of In Touch executive editor Stephen LeGrice.

US Weekly: US Weekly has on occasion borne an uncanny resemblance to In Touch sister publication Woman’s World, so it’s only right to expect that In Touch will return the favor.

People, circa 1975: It’s a strange end game, but In Touch’s ultimate goal may be to capture the kind of hip, earth shoe-wearing people who bought this happening issue of People in 1975. “The fact is that you’ve got People, the Enquirer and the Star appealing to an older readership,” said LeGrice. “We’re going after 30-somethings, the kind of people who, 25 years ago, would have bought People.” People editor in chief Martha Nelson disagrees with LeGrice’s claims, however. “According to MRI, we have the largest reach among 18- to 34-year-olds — 13 million readers, if you count pass-along, every week,” said Nelson in a telephone interview.

US might be garnering the lion’s share of buzz right now, but People remains — not surprisingly, given its circulation — the magazine everyone else wants to be.