NEW YORK — For today's denim brands, it's no longer enough just to sell jeans. What they really want to sell is a lifestyle.

That's the word currently on the lips of marketers across the denim spectrum, from boutique labels such as Earl... 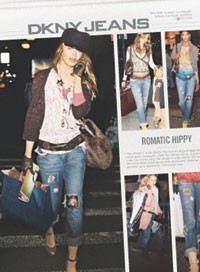 NEW YORK — For today’s denim brands, it’s no longer enough just to sell jeans. What they really want to sell is a lifestyle.

That’s the word currently on the lips of marketers across the denim spectrum, from boutique labels such as Earl Jeans and Seven For All Mankind to giants like Gap and Polo Jeans. Exactly what it means depends on whom you ask. For some, “lifestyle” simply means everything that exists beyond jeans.

“It’s a code word,” explained Chris Kolbe, vice president and design director of Original Penguin, whose upcoming fall ad campaign will be the company’s first to feature denim. “Most people that say they want to be a lifestyle brand are saying, ‘OK, I’ve been really good at one category, and now I want to do other things.'”

Steve Birkhold, president of Earl Jeans, said, “When we use the word ‘lifestyle,’ it basically means that we’re a brand that caters to a lot of [our customers’] different needs.”

Others see lifestyle as something bigger and somewhat harder to define — a philosophy or aesthetic that makes consumers feel a connection with the brand that transcends their affinity for its products.

For Gap, that aesthetic can be summarized by the slogan “fresh, casual American style,” according to Jeff Jones, executive vice president of marketing.

“Denim is one of the ultimate representations of what that should be to our consumers,” Jones said.

At DKNY Jeans, lifestyle marketing means conveying a sense of youthful energy, something DKNY has always considered to be one of its core brand attributes, according to Michelle Ryan, director of marketing for DKNY Jeans & Juniors. But it also means surrounding the consumer and creating as many opportunities as possible for her to interact with a brand.

“Capturing lifestyle is the most important part of our marketing concept,” Ryan said. “You really have to touch the customer personally. They’re not just reading magazines. They’re in the malls, they’re on the streets, they’re watching movies and concerts. It’s not just about running an ad page and calling it a day.”

But not every marketer has the resources to adopt such an all-encompassing strategy. Premium denim brands, in particular, have to be more selective, because few of them have significant budgets for consumer advertising. Until recently, Earl Jeans was an exception, running ads last year in magazines including Vogue, W, Visionaire and GQ. But this year the company discontinued its print advertising, according to Birkhold.

“The problem for us is, with our spend, we can’t make a consistent impact,” he said. “Some of the guys that spend a lot more money than we do — Levi’s, Guess — they really dominate denim advertising. Quite honestly, one ad over a fixed period of time just didn’t move the needle.”

Moving forward, Birkhold said, Earl will concentrate its marketing resources on other methods, including mailings, look books and public relations.

“We’re being very strategic with it and targeting it where we know we’ll see benefits,” he said.

But even the bigger players are increasingly finding that print and TV advertising alone are not enough to generate the impact they desire. More and more, they are relying on partnerships, product placement and event marketing to generate consumer awareness.

The theme of Polo Jeans’ marketing efforts is intimacy — the way consumers “take our denim and make it their own,” said Mona Tilley, the brand’s senior vice president of marketing. One effective way Polo has found for communicating that idea is events held on college campuses, where students have an opportunity to customize their jeans with beads, paint or tailoring.

“When we started testing the events in stores, we found our sales were just going through the roof,” said Tilley. “It’s important that you’re offering the consumer an interactive experience.”

Gap is also looking to create more interactive experiences for its customers, to convey the message that the company’s jeans now come in a vastly expanded variety of fits.

“Look for us to do more guerrilla marketing and grassroots tactics to take our jeans to the public,” Jones said. “We will be spending more in nontraditional media types than we have in our history.”

Though he declined to go into specifics, he said the campaign — both the conventional and guerrilla aspects — will be organized around the idea of “favorites.” That explains, in part, the decision to replace actress Sarah Jessica Parker, who has starred in the past three seasons’ Gap campaigns, with a musician, Joss Stone.

“A favorite pair of jeans and a favorite song are actually very similar,” Jones said. “They’re both real, personal expressions of you.”

Gap is not the only brand that sees a natural relationship between music and denim. Over recent months, DKNY Jeans has sponsored events at the Coachella, South by Southwest and CMJ music festivals, and, through a partnership with Vanity Fair, it will also sponsor a concert series tied to the magazine’s November issue, said Ryan.

Event marketing is closely tied to another tool that is becoming ever more indispensable to denim marketers: product placement. Companies that are lucky enough, or savvy enough, to get their logos onto the oft-photographed behinds of Hollywood stars stand to gain much in brand awareness. This is particularly important for boutique brands that eschew other types of advertising but sponsor hospitality suites at music or film festivals.

“If you see Cameron Diaz or Jessica Simpson has a new jean on and it’s got an identifiable back pocket, there will be an instant reaction to that,” said Birkhold.

“What they’re wearing becomes kind of the ‘It’ jean, and that’s how a lot of brands break,” added Kolbe.

Even mass brands experience a halo effect when someone turns up in Us Weekly or In Touch sporting their logos.

“It certainly does drive business,” said Polo Jeans’ Tilley. “The younger consumer, especially, is going to look toward pop culture. Three weeks ago, when Jennifer Lopez was shot wearing one of our sweatshirts, it was a great day for me. But do we actively seek it? No. I’m not about to pay someone to go after a celebrity.”

Much as denim marketers appreciate the value of celebrity product placement, they’d all prefer it to be seen as something that just happens rather than something they work to bring about. After all, wearing jeans is all about being casual, and selling them should be, too.

“You don’t want to be perceived by this consumer as trying too hard,” said Birkhold. “She’s got to discover you.”