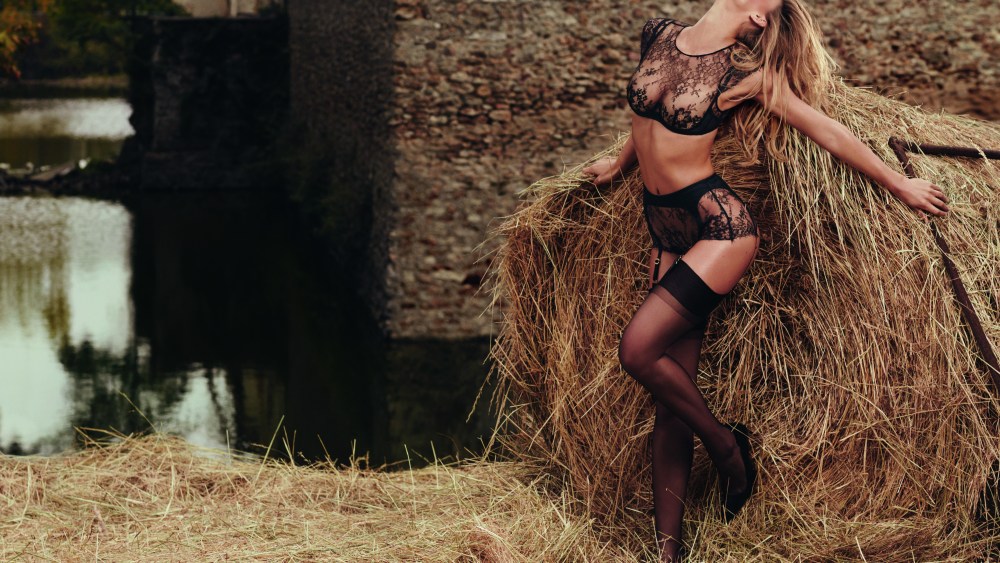 The latest Agent Provocateur marketing campaign breaks this week featuring Bar Refaeli as a barn girl reclining seductively on piles of hay — and not looking like she rose at dawn to milk the cows.

Shot by Sebastian Faena in the countryside outside Paris, the campaign is meant to conjure a hot summer mood and a love of the great outdoors.

Inspired by films including “Paris Texas,” “Stealing Beauty,” “The Virgin Suicides” and “Last Tango in Paris,” it is also the brand’s first campaign shot on location outside.

According to creative director Sarah Shotton, the team was expecting sunny weather but got cloudy skies, rain and cold instead.

“There we were in our North Face puffer jackets, hoping for some sun,” said Shotton, adding that Refaeli, instead, was in AP underwear.

“Thank God for Bar — she was a really good sport, waiting in the stables until the sun came out. And she is really hot — you can’t look like that and feel the cold.”

Shotton added that she chose the model for her “film noir, feline quality,” and for the synergy she had with the collection and Agent Provocateur.

Refaeli wears some of the key looks of the spring season, including a black, high-cut bodysuit in stretch chiffon with a built-in bra and suspenders, and a cropped camisole top with inner support, and miniskirt that can be worn as lingerie, pajamas or clothing.

Shotton said she’s seeing a trend for women wanting their lingerie to multitask and to have a sporty element, too. “They also want to show off our lingerie and are looking for something that is out of the ordinary.”

The campaign will be used online, in-store and at AP points of sale.

Online sales were up 30 percent year-on-year, and international brick-and-mortar expansion continues to be a major focus.

Over the past seven years, Agent has expanded its offer to include a lower-priced line called L’Agent, which is designed by Penelope Cruz and her sister Mónica Cruz Sánchez.

The brand also has five fragrances with partners InterParfums.