The luxury lingerie brand is exploring a more romantic side for spring. 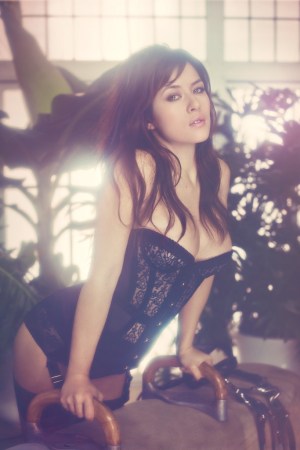 “I was looking at [photographer] David Hamilton’s images and watching lots of soft-focus movies like ‘Emmanuelle’ and ‘The Story of O,’” said Agent Provocateur’s creative director Sarah Shotton of her inspirations for the campaign. She noted that she wanted to illustrate that Agent Provocateur is a label that can appeal to “lots of different characters of women.”

This story first appeared in the January 23, 2012 issue of WWD. Subscribe Today.

“Some people are a little bit scared of getting through Agent Provocateur’s shop door, and the campaign was a way of us saying, ‘it’s not all about Miss Whiplash,”’ said Shotton.

Shotton tapped director Jordan Scott to shoot the campaign as well as a series of accompanying short films that will premiere on Agent Provocateur’s Web site during the season. Scott, who is Ridley Scott’s daughter, is known for her film “Cracks” and short films for Prada, alongside a raft of commercials. She achieved the hazy feel of the images by shooting the pictures with silk stockings over the lens, Shotton explained.

To accompany the campaign, Agent Provocateur will produce a magazine to be carried in its boutiques that is reminiscent of a vintage Seventies title.