Christina Aguilera tested the versatility of the little black dress last week at a shoot in Santa Monica, Calif. 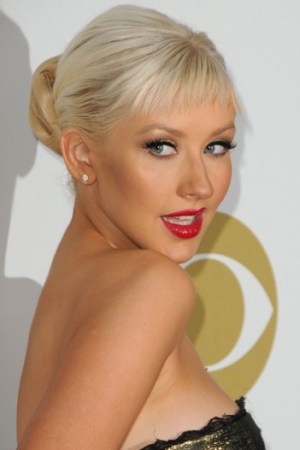 AGUILERA GOES RETRO: Christina Aguilera tested the versatility of the little black dress last week at a shoot in Santa Monica, Calif., for jeweler Stephen Webster’s spring ad campaign, which will break in April fashion magazines. She sported different dark frocks that ran the gamut from sequined to feathered for the six images, three of which feature Webster’s fine jewelry line and three from his silver line. “This campaign has a new look that also reflects the direction I am going in with my music,” explained Aguilera, who is to begin work on her new album early next year. “The last campaign was very Hitchcock and film noir inspired. The new look is more futuristic glam that pulls from the Sixties and Seventies era that has been inspiring me lately.” The ad concept, shot by Craig McDean, is intended to match Webster’s jewelry, according to the designer. “It’s not the most girly looking collection. I’ve never really done that very well anyway,” he said, adding the edgy style fits with Aguilera’s personality. “She’s feisty, and I think that kind of comes [across in the ads],” said Webster.

This story first appeared in the December 18, 2008 issue of WWD. Subscribe Today.

PAMELA MEETS VIVIENNE: Pamela Anderson will be Vivienne Westwood’s poster girl for spring. Anderson will feature in Westwood’s spring campaign along with Westwood herself and Andreas Kronthaler, the designer’s husband and creative partner. Juergen Teller shot the trio on location at Anderson’s trailer in Malibu, and all four of Westwood’s clothing lines — Gold Label, Red Label, Anglomania and MAN — will be in the ads.

A spokesman for Westwood said the designer chose Anderson for the campaign after seeing the model and actress “look stunning” in a gold Lurex dress from Westwood’s Gold Label collection at her spring Red Label show in London in September. In addition to running in the February issues of selected fashion titles, images from the campaign will also be published in a coffee-table tome from Steidl, set for release this spring.

STELLA GOES MOBILE: Now Stella McCartney customers can check out the designer’s collections while they’re on the move. Tuesday marked the launch of the designer’s first mobile marketing campaign, which allows smartphone and iPhone users to view the designer’s spring and summer collections via the Internet on their phones, sign up for updates from the brand and locate Stella McCartney stores. Stella McCartney banner advertisements will be placed on several mobile Web sites — including nytimes.com and cnn.com — so users can click on the banners to view McCartney’s campaign and collections. The ads run through to the end of January in North America and has been implemented by Millennial Media, a U.S. mobile media networks company. “The initiative enables the brand to target…fashion consumers in the U.S., while also being true to the brand’s efforts in environmental responsibility, since the campaign is digital and avoids any wastage,” said McCartney.

PASSAGE TO INDIA: In a nod to one of its most important new markets, India is the setting for Ermenegildo Zegna’s spring ad campaign. Photographed by Nathaniel Goldberg in Jaipur, known as India’s “Pink City,” the ads will break in February newspapers, weekly magazines, monthly fashion and lifestyle titles and outdoors, although the specific media buy has not been finalized.

“The Zegna spirit is perfectly represented here, where the blend of tradition and modernity, craftsmanship and creativity, all combine in a country of extremes,” said Anna Zegna, image director at the Milan-based company.

Zegna opened its first owned retail boutique in Mumbai in May 2007, followed by stores in Delhi and Bangalore. The brand has recently become eager to photograph campaigns in important emerging markets: Its spring 2007 ads were shot in China, and its current fall ads were shot in Berlin, gateway to Eastern Europe.

The spring ads carry the ongoing tag line “Great minds think alike,” and feature Zegna’s different labels in various settings. The core Sartoria label was photographed in the Rambagh Palace in Jaipur, once the residence of the royal family and now home to the Taj Hotel Resort. The top-line Couture and Made-to-Measure labels were shot in the City Palace, another royal residence, while the Upper Casual sportswear label was snapped on Jaipur’s main road, with models riding the city’s archetypal motorbikes. Along with shooting in India, the campaign features London-born, Indian male model Moose Ali Khan, as well as top faces like Will Chalker and Andrés Segura Velencoso. To align itself with the theme of the campaign, the Fondazione Zegna is making a donation to Care & Share India, a nongovernmental organization that assists orphaned children on the subcontinent.

Zegna declined to divulge the advertising budget for the spring season. From January to September 2008, Gruppo Ermenegildo Zegna, which includes the Agnona brand, spent $7 million in U.S. advertising, according to TNS Media Intelligence.