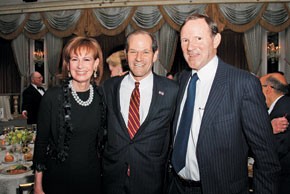 He greeted guests warmly and drew them into conversation during the cocktail hour before being honored Tuesday by the American Jewish Committee at the Pierre Hotel in Manhattan.

First, however, he called on Warren Buffet for a Graham anecdote. Buffet, a member of The Washington Post Co. board, recalled a board meeting years ago at the home of Graham’s mother, and predecessor at the company, Katharine Graham. Robert McNamara, who was defense secretary under presidents Kennedy and Johnson, offered $5 to anyone who could name Lincoln’s vice president in 1861. Buffet said he told him, “‘I’ll bet you $5 Don will know the answer when he walks in.'” Of course, he did — Hannibal Hamlin, who had been a senator from Maine.

“His mind is so encyclopedic,” Buffet said. “Anyone else with that kind of knowledge would need to show it to everyone else and Don never has.”

Graham is the third generation in his family to hold the reins at The Washington Post — Katharine Graham succeeded her husband, Philip. His maternal grandfather, Eugene Meyer, bought the newspaper at a bankruptcy sale in 1933.

Bloomberg noted Graham is a savvy publisher and a sound businessman, an unlikely combination. “He understands the industry as well as anyone can and he is respected by his employees and in this modern day, most publishers aren’t because they’re the suits,” the mayor said. “He gets a lot from his mother — whom I knew well. He’s a real journalist and businessman.”

This story first appeared in the November 26, 2007 issue of WWD. Subscribe Today.

And, citing board members such as Buffet and Melinda Gates, Bloomberg added, “You can tell a lot about a company from its board members.”

Spitzer recalled that Graham was a Washington police officer for a year “after he got back from [serving] in Vietnam. I think that says everything that can be said about him. He is someone who doesn’t take his position or stature for granted.”

Having served on the Pulitzer Prize board with Graham, Bollinger described him as a force for quality journalism, “which a lot of us fear is going away.”

Graham, whose sister Lally Weymouth was often at his side Tuesday, enjoyed all the New York glad-handing. “I love it,” he said.