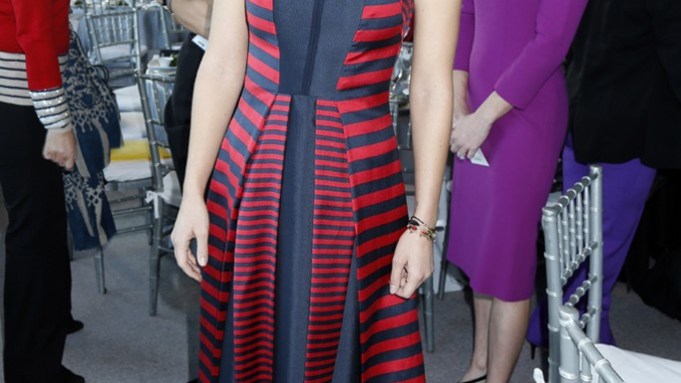 THE VIEW FROM ABOVE: At Wednesday’s Power of Presence panel, Marie Claire editor-in-chief Anne Fulenwider clued in the crowd about her newest hire — artistic director Alex Gonzalez. They also heard straight from the source that Nina Garcia is now creative director. The “Project Runway” judge was among the room of 250.

After lunch was served on the 44th floor, Sylvia Ann Hewlett, president of the Center for Talent Research, warmed up the crowd with tips about Executive Presence, a survey published in this month’s Marie Claire. (Think yes to confidence, no to crooked, discolored teeth.) A Lanvin-clad Fulenwider then pulled up Olivia Wilde, Rachel Roy, The Weinstein Company’s Meryl Poster and CBS’ Norah O’Donnell for a chat about breaking the glass ceiling. Wilde, who will headline “The Incredible Burt Wonderstone” in March, said, “What I have found as a woman in Hollywood it is all about defying expectations. Everyone expects every actress to be stupid. It’s just wrong…for most people.”

Poster mentioned how Harvey and Bob Weinstein understand that when she is strong with them, they recognize it is coming from the right place. O’Donnell took a more political stance, noting how women account for more than 53 percent of the electorate, but only 17 percent of the House of Representatives and 20 percent of the Senate. Highlighting the need to always be well-prepared, the newscaster recalled how she once misplaced her questions right before an on-air interview with the vice president. (She also gave props to Fox News and Michelle Obama for furthering the bare-arm trend.)

Roy explained why she prefers to work with people who can also think on their feet. “I don’t want to hire anyone that has to fit into any box. I want to work with people that come with new ideas, think outside the box and push boundaries,” she said. “When someone comes to work, you have to bring your best because you’re getting paid to be there. You’re not doing anyone a favor. You have to bring your best.”

That was a sentiment Fulenwider can relate to. She said Gonzalez will be “rolling up his sleeves” at a Hearst Tower meeting Thursday, fleshing out some of the ideas they have been swapping for the past month or so. Not looking to change the magazine 180-degrees, the editor in chief said just as Garcia’s new role will help extend the magazine’s reach with the fashion crowd, Gonzalez will give the publication “a new level of design and photography cred.”

Eager as Fulenwider is to get to it, her vice president and publisher Nancy Berger Cardone told Wednesday’s crowd about a lighter side. “One of the funniest things Anne has ever said to me was, ‘I have the worst name anyone could have to be the editor of a fashion magazine — full and wider — because that is the last thing that any woman wants.”