The British presenter, model and DJ is featured alongside the brand’s new Le Pliage Héritage bag. 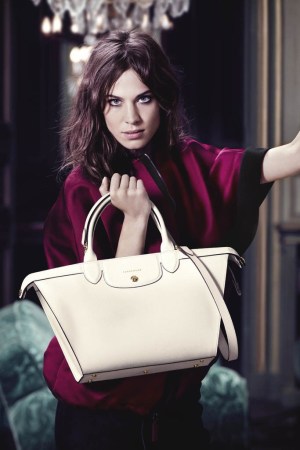 TAKE 20: Longchamp will continue its celebration of the 20th anniversary of its signature Le Pliage bag with a fall advertising campaign featuring Alexa Chung with its new Le Pliage Héritage.

In her second season as the face of the French leather goods firm, Chung was photographed by Max Vadukul at the 18th-century Château des Ormes in France. She poses with Le Pliage Héritage bags in ecru and carmine, as well as a Le Pliage Héritage Luxe bag in panther-print baby calf.

The shoot was styled by Alexis Roche, with hair by Laurent Philippon and makeup by Tom Pecheux.

The print campaign, which will break worldwide from August, will be followed by a short film, “Longchamp Heritage With a Twist,” directed by Jean-François Julian and starring Chung in a series of “Alice in Wonderland” scenarios.

Featuring a song by rising French performer Christine and The Queens, the short will screen on longchamp.com and social media from Sept. 9. In addition, illustrator Fabienne Legrand sat in on the campaign shoot and recorded the backstage ambience in five sketches featuring Chung, Julian and others on set.