On June 15, Alexa Chung will make her U.S. debut hosting a yet-to-be-titled daytime show on MTV.

By Amanda FitzSimons on May 13, 2009
View Slideshow 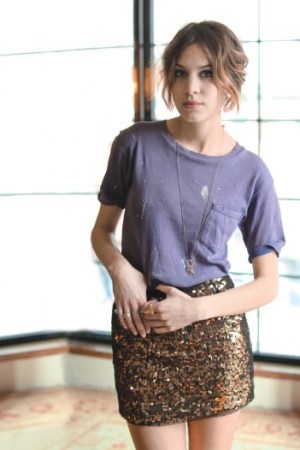 Since her Stateside exposure has been limited to the occasional party photo in a fashion magazine, Americans would be forgiven if they think Alexa Chung’s sole achievement is her ability to pull off short shorts and teetering heels. But Chung, a 25-year-old former model who’s already made it big in her native England as a TV host, is ready to show this side of the Atlantic what else she has to offer.

“It’s about time Americans hear this s–t,” she says.

On June 15, Chung will make her U.S. debut as host of her own yet-to-be-titled daytime show on MTV. The hour-long live program will feature a mix of celebrity interviews and music performances, all taking place on a set designed to look like a cozy living room. “[The premise] is I’ve just moved here and I’m trying to meet people, so I’m inviting guests to the show,” explains the host, who relocated from London to the Williamsburg section of Brooklyn, N.Y., with rocker boyfriend Alex Turner of the Arctic Monkeys earlier this month.

And while Chung is inheriting the time slot once occupied by ratings-juggernaut “Total Request Live,” she insists the program is all her own. “I told them I’d have opinions about things,” she says of her initial meeting with MTV producers.

Certainly, Chung has earned the right to have her say. “It’s weird; I’m new to New York, but I’m old hat at [TV],” she says. Chung, whose mother is British and father is Chinese, was discovered by a modeling scout at 16. “I did loads of bad s–t,” says Chung, who appeared in ads for Tampax. In 2006, she landed a job as a co-host of “Popworld,” a music television show known for its snarky tone. “There’s always people watching you on a photo shoot with modeling, so hosting wasn’t a vast step away from that,” she says. As a sort of personality-for-hire, Chung has also served as everything from a panelist on a quirky quiz show called “8 Out of 10 Cats” to a correspondent who interviewed the likes of Roberto Cavalli and Karl Lagerfeld for a fashion trend show called “Gok’s Fashion Fix.”

Still, Chung remains level-headed about her success. “Presenting isn’t hard. You’re basically reading cards. I mean, how f—ing difficult is that?” she says. “The hard bit is getting over knowing that lots of people are watching you, and you, your personality, not your looks, not your talent for math or something, [is what] they’re judging.” But that’s fine with her. “I’d rather someone go ‘Ah, she’s really funny’ than ‘Ah, she’s really foxy.’”

And, with her latest venture, Chung will know exactly what her audience is thinking because of an online component that encourages viewers to comment via Facebook and Twitter. “You can contact the show and tell us directly we are s–t,” she notes.

Presumably, execs at MTV are counting on more glowing feedback than that. The network’s ratings for the first three months of 2009 dipped 18 percent, and Lauren Conrad, the much-idolized star of the network’s current front-runner, “The Hills,” is jumping ship after this season. In short, there’s a lot riding on Chung.

“We auditioned many, many, many people for this show, and that’s five or six manys,” explains MTV executive vice president of news and production Dave Sirulnick. He says he and his colleagues had been searching for someone to fill Chung’s role for almost three years until a British production company tipped them off about Chung. “We immediately fell in love with her,” he says. “It feels to me that she’s very much in touch with the way our viewers live and think.”

That might be a bit of a stretch. Even though she favors what she calls an “I don’t give a s–t” style, Chung racks up a serious clothing bill. “It’s ironic, because I get to wear nicer clothes and shoot for better magazines now than I did when I was a model,” says Chung, who stockpiles labels including House of Holland, Alexander Wang and Luella Bartley for both on- and off-camera appearances.

But Chung, who doesn’t work with a stylist for events and is still working out the details of her wardrobe situation at MTV, considers such purchases necessary. “I don’t do a normal job. So I have to have more clothes than most people,” she says with a shrug. Nor is she about to dial down her outfits so her teen audience can relate; in fact, she expects to wear many of her own clothes on the show, noting, “I will wear what I always wear from day-to-day.”

And Chung believes being herself will translate into ratings. “I think the mistake a lot of TV channels make is that they assume kids are dumb when they’re not,” she says. “Middle-aged fat men [shouldn’t] tell young people [what] to watch when they have no idea.”

But Chung’s keep-it-real attitude has its limits. “I would never do [reality TV]. It’s 24-7 [of] making things up, making you refilm it,” she says. “[With my show] it’s one hour of me, in control the whole time.”