It’s a testament to her legacy and influence that she wasn’t just a role model to a younger generation, but to her peers as well. 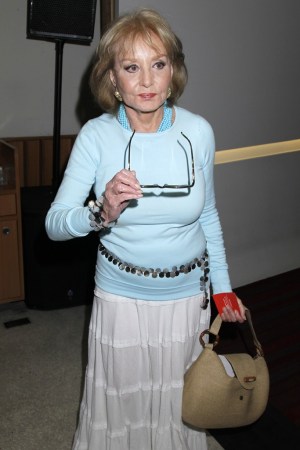 ALL ABOUT NORA: The last lunch the Harpies had with Nora Ephron almost didn’t happen.

The Harpies are a group of accomplished women who’ve been meeting regularly for lunch for years, maybe a little over a decade. No one’s ever kept track.

This story first appeared in the June 28, 2012 issue of WWD. Subscribe Today.

There are nine of them, like in the Supreme Court, and they’re all sages in their respective worlds — journalism, public relations, politics, gossip. There’s Barbara Walters, Liz Smith, Jennifer Maguire Isham, and publicists Peggy Siegal and Maurie Perl, among others. Smith came up with the nickname.

RELATED STORY: Nora Ephron, a Woman of Letters, Dies at 71 >>

The lunches are always off the record, never at the same place. They talk politics and cosmetics, media shake-ups and family, breakups and the virtues of truffle sandwiches.

Ephron was one of the last to join. And when she did — no one remembers when exactly (maybe five years ago?) or who invited her — it was strange to everyone that she hadn’t joined before.

The chats, quippy and serious, and the women themselves — successful, opinionated — seemed ripped from one of her essays or movies.

“It felt as though she’d been part of the group for years, like she’d had a seat at the table forever,” Perl said.

Usually they rescheduled when they couldn’t make full quorum. But in May, though only six could come, they went ahead and met anyway. Ephron and Barbara Walters picked the place — Le Petite Maison in Midtown Manhattan.

They sat in a round table, as was the custom, in a corner near the back and it was quiet, one of the few occasions when they didn’t have to shout over the usual chatter of the restaurants. It’s hard now for them to remember what they talked about; when asked about the lunch Wednesday, Walters just shrugged and smiled. They were never meant to be anything more than no-bull gab-a-thons, she said.

But the women of the Harpies remembered Ephron’s spirit that afternoon. “Nobody knew she was sick,” Smith said. Not that she would have let on. She was indomitable, averse to melancholy, more likely to soliloquize about the smoked salmon at Barney Greengrass than an illness.

“Nora was someone we all wanted at the table. We always wanted to know what Nora thought about any given subject,” Perl said. “She didn’t preach. She gave you an opinion or a point of view. And on a personal level, she was extremely generous and kind to each of us independently.”

Many women have offered condolences and remembrances online and via the press since Ephron’s passing Tuesday at 71. For young women, her death represents the loss of a talisman, a woman who epitomized success on personal terms.

But it’s a testament to Ephron’s legacy and influence that she wasn’t just a role model to a younger generation, but to her peers as well.

At a luncheon Wednesday to celebrate the PBS/AOL documentary project, “Makers: Women Who Make America,” where Ephron herself is featured, her passing set the tone for the afternoon, and several high-profile women — Walters, Gloria Steinem, PBS president Paula Kerger and “Makers” filmmaker Dylan McGee, who quoted Ephron’s Wellesley commencement speech — paid tribute from the podium. Steinem said it was fitting for Ephron to be featured in a collection of female personal histories.

“With her usual wit and timing, she has left us words and film,” Steinem said. “There’s literally no stronger argument for creating this inspiring, irresistible record of women than to have Nora’s words with us today.”

Walters singled out the bond that the women of the Harpies cultivated.

When Ephron joined, “she brought everything that she is,” Walters said minutes before her speech. “The humor, the honesty, the people she met, the things she’d done.”

The Harpies got an intimate, table-side look at Nora the raconteur, Nora the food lover, Nora the confidante. When they were going through tough times, it was Ephron who comforted them over a lunch of truffle sandwiches.

“I’ll treasure those kind of quiet, thoughtful moments with her,” Perl said. “She’s somebody I’m grateful and blessed that I could say I know. I missed her even when I didn’t see her.”

Even among a group of women who are all accomplished in their own right, Ephron was someone to look to for advice. Her life experience gave her an uncanny sense of empathy for other women’s stories.

“There’s some in the group that are younger than others, but we all liked and respected each other tremendously,” Perl said. “These are a core group of women who are all very supportive of each other.”

“I had a tremendous amount of respect for her,” Siegal said. “She was a role model especially among successful women because she really had it all. She came from a family that was very accomplished. She went through two divorces. She had children. And yet she had this unbelievable career.”

For women, young and old, Ephron was also a cheerleader.

“She always made you feel better about what you were doing. She was always a fan,” said Maguire Isham, an executive vice president at the Tribeca Film Festival who is one of the younger Harpies. “The thing about Nora was that she said you could do more than one thing. She always said she reinvented herself every 10 years. And she always pushed us to do that. That was a big thing coming from her.”

With Ephron gone, it’s not clear what will happen to the Harpies. “I think we’re all shattered,” Smith said. But Perl says eventually they’ll pick up again.

“I think Nora would find it very strange if we stopped,” she said.