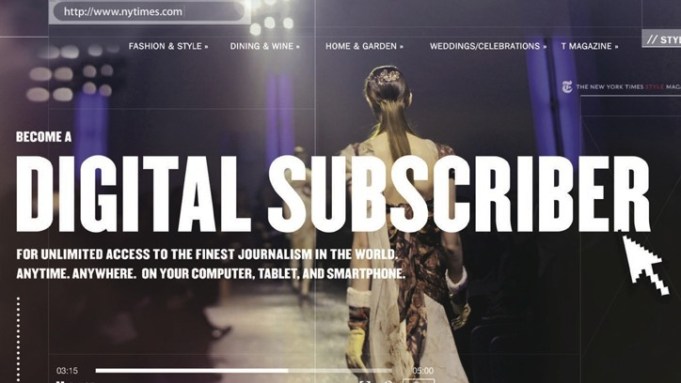 ALL AROUND TOWN: In an earnings call last week, New York Times Co. chief executive officer Janet Robinson said she’ll be spending $13 million, mostly in promotional costs, on the flagship newspaper’s new pay wall through the end of 2011. New Yorkers have begun to see those advertising dollars at work around town.

The Times is running a series of three posters on Metro North, Long Island Railroad, in taxis and on the subway (e.g. the 8th Avenue-bound L platform at First Avenue). The three iterations — designed around the theme’s art, world and style — make use of photographs taken by Times’ photographers. One shows My Chemical Romance singer Gerard Way head-banging bright red hair; the second shows a student walking home near the border of Somalia and Kenya; and the third shows a runway model at Donna Karan‘s show last fall. All three versions have lots of intricate webby-looking graphics — interactive time lines, podcast buttons, video players, links to comment threads. The point seems to be: There’s a lot to click on at nytimes.com. The most prominent type on all three ads is the same: “Become a digital subscriber. For unlimited access to the finest journalism in the world. Anytime. Anywhere. On your computer, tablet and smartphone.”

The Times has also launched a complementary TV campaign, with two different spots that will run throughout 2011. One ad is a general advertisement for the New York Times Web site with a pay-wall hitch at the end. The second spot shows two readers, one an online subscriber and one a visitor to the site, going through their days. The subscriber seems way more distracted at work. “Get the world’s finest journalism in all its forms,” the voice-over proclaims. “Only one news organization covers the world like The New York Times, and that’s The New York Times.”

The Times contracted Rick Rabe of The Propellor Group as art director and Nat Whitten as a director and copy writer to work on the ads. In house, Times marketing group director for creative services Laura Langdon oversaw the campaign as executive creative director.

BERNER OPTS OUT: During her four years at Reader’s Digest Association, outgoing chief executive officer Mary Berner worked with four different boards of directors, entered into a prepackaged bankruptcy, launched new magazines (while downsizing the flagship title) and led a dramatic change in corporate culture that was completed when RDA moved from a sleepy town in Westchester to Midtown Manhattan.

Reached by phone on Monday after it was disclosed she was out as ceo, Berner sounded relieved to be moving on. “I’m leaving for a few reasons,” she told WWD. “There is a new board of directors and our visions are different for the company.” Eight new board members were installed last week.

Berner said one of her biggest accomplishments at RDA was redefining its corporate ethos, from “slow plodding” to “aggressive, modern and focused.” She looked outside, to companies such as Condé Nast — her former employer — to hire executives including Eva Dillon (who left the company last year and had recently been serving as a consultant) and Dan Lagani, as executive vice president. The position has been something of a hot seat as board members came and went, while Berner drove the business back onto a growth track and expanded its international presence. Under steady pressure to cut costs while servicing large amounts of debt, Berner cut head count, among other expenses, laying off approximately 300 people last year.

Berner declined to talk about how much she’ll be paid as she exits but sources said with a change in control at the top, she’s poised to receive a substantial windfall. As for future plans, Berner claims to have nothing lined up. “I’m going to read all the books stacked up next to my bed,” she said. “I’ve worked every weekend for four years.”

Berner joined the company in 2007, when her brother’s former firm, Ripplewood Holdings, acquired RDA and took it private. At that time, Ripplewood paid $2.4 billion, or $17 per share in cash, which represented a premium of 23 percent over the company’s average closing share price. The move came at a time when media properties were pulling down sky-high multiples. RDA is now controlled by new shareholders, including hedge fund Alden Global Capital.

Some observers were surprised that Berner’s number two, Suzanne Grimes, executive vice president of RDA, wasn’t tapped for the top slot. Instead, the board appointed chief financial officer Tom Williams, described by insiders as being very press-friendly and good at board presentations. Berner recruited Williams to join the company in 2008, from marketing services company Affinion Group.