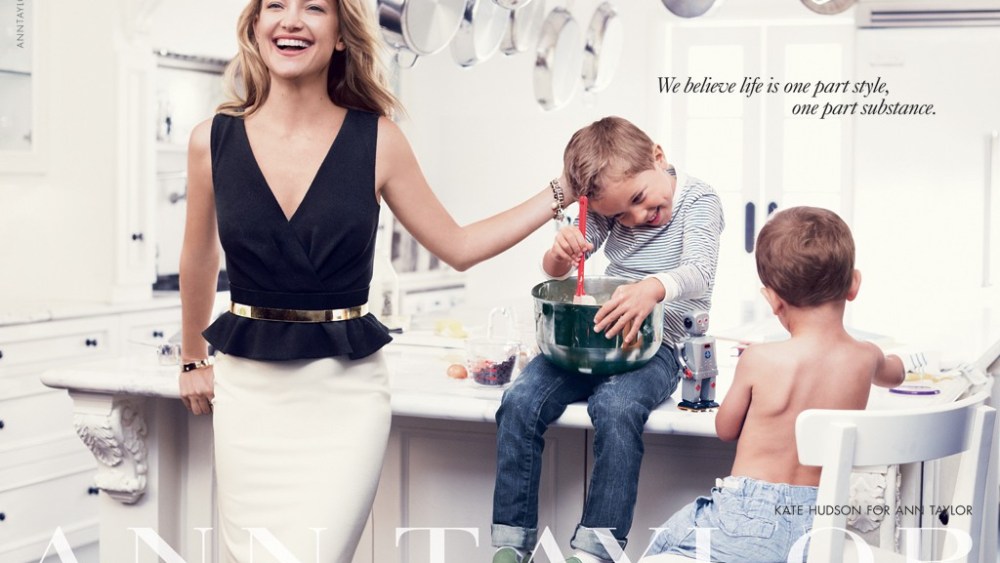 ALL IN THE FAMILY: Kate Hudson is returning this fall for another round of Ann Taylor advertisements — this time with an assist from her two young nephews. The children help bolster the season’s campaign theme, which centers on Hudson’s real-life role as a working mother, while speaking to the brand’s target demographic of multitasking career women.

“My brother [Oliver Hudson] brings my nephews over to my house a lot, and all the kids get along so well,” said Hudson, who first appeared in the retailer’s spring 2012 campaign. “We have a very, very close family, so for them to be here today and enjoy this process with me and to be able to see them on Madison Avenue in these pictures is going to be a lot of fun.”

Lensed by Mikael Jansson, the shoot was at a private home in Beverly Hills. In one image Hudson reads a pile of scripts, black marker at the ready, while in another she’s leaving home in a rainstorm as she navigates a tricycle, skateboard and soccer ball strewn around the front yard. Her nephews are in a domestic scene in the kitchen, stirring a stainless steel mixing bowl of batter.

Various maxims are highlighted in each iteration of the campaign, such as “We live, work and play in the moment.”

“It’s a little bit about how I live and a lot about how women live every day,” explained Hudson, who has two young sons of her own. “As working moms, we’re all just figuring it out as we go, right? But if I were to offer my advice, I’d say, Try to be present. When you’re at your job, be 100 percent committed to it and do the very best you can. And when you go home at night, leave all the work behind and show up completely for your family. That’s the best part of your day, so really be there.”

The campaign breaks in September magazines, including Vogue, Elle, InStyle, Marie Claire, Cosmopolitan and People StyleWatch. A social media component encourages women to share photos of their busy lives with the hashtag #chiclifestyle.

Hudson continues to serve on the advisory council of Ann Inc.’s ANNPower Vital Voices philanthropic initiative and will appear in Ann Taylor’s campaigns through 2014.