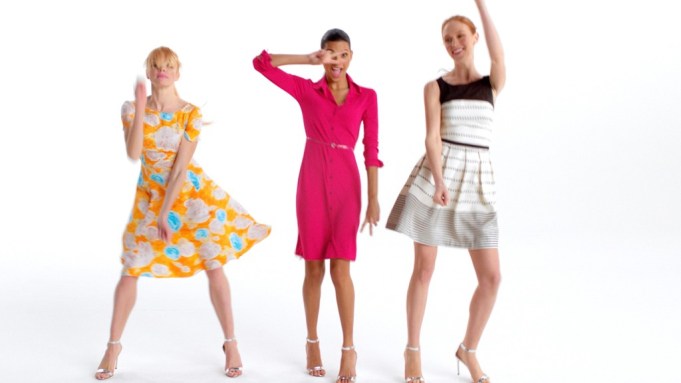 AMAZON ON THE TUBE: Amazon.com is hitting the airwaves.

The e-commerce behemoth will today unveil its first TV ad campaign to support its fast-growing fashion category. The commercial is part of a multipronged campaign centered around spring dresses and follows the news last November that the e-tailer leased a 40,000-square-foot space in Williamsburg, in Brooklyn, N.Y., that will act as a photo studio for Amazon Fashion (which also owns MyHabit and Shopbop).

According to Cathy Beaudoin, president of Amazon Fashion, the e-tailer wants to use TV to “create greater awareness” that Amazon.com is a destination for fashion editorial content, point of view and a large selection of brands. The overall campaign spans TV, print, outdoor, online display and social platforms and ties back to a “really immersive site experience,” she said.

“Because we know our customers are everywhere, consuming media across the board — online, media, print, TV or even two or three at once — we want to be where they are,” Beaudoin said, adding that the same dresses are featured on the site, in print ads and on the 30-second TV spot.

Dennis Leggett, Amazon Fashion’s creative director, worked with Peggy Sirota, who directed the commercial, which will air in select markets during prime-time programming.

“It’s not a traditional storyline where you start at [point] A and end at [point] B. It’s a series of vignettes, and we made sure the brand came through. Because we haven’t been on TV before, a main goal was to make sure the customer knew it was from Amazon,” Leggett told WWD, noting that this was achieved by spelling out the letters throughout the spot, whether the models skated or hula-hooped through them.