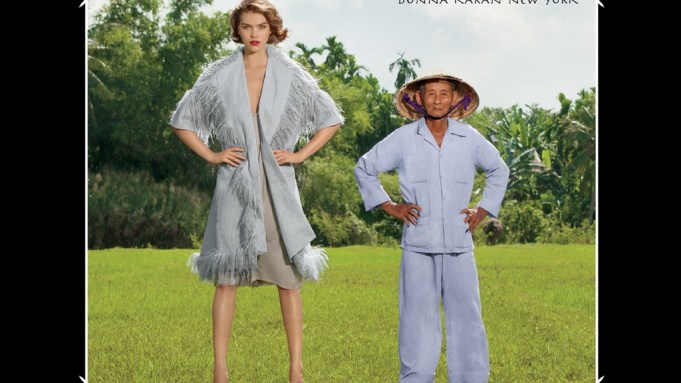 VIBRANT VIETNAM: An Eastern wind ruffling through the Spring 2013 runways caught the attention of Andrea Sanders, senior vice president and creative director of Americana Manhasset. “There were Asian undercurrents throughout the collections,” she said. Longtime collaborators Rocco Laspata and Charles DeCaro, partners in the ad agency Laspata/DeCaro, agreed.

So, the team high-tailed it to Hoi An, Vietnam, known for its foliage and numerous bodies of water, to shoot the Americana’s 60-page spring catalogue, “In the Mood for Vietnam.” A 30-second film will air on New York City Taxi TV during fashion week and a behind-the-scenes video will be seen on the Americana’s Web site.

Images of the lush landscape are punctuated by bursts of saturated color — red, blue, pink and yellow — as vivid as the lanterns lining a Hoi An bridge. Villagers dressed in the traditional peasant uniform of silk pajamas carry baskets slung over their shoulders filled with bright fruit and flowers. It’s hard for the locals not to stare at model Arizona Muse standing on the bridge, off to the right and wearing a Louis Vuitton coat that barely skims her thighs.

“The country shares equal billing with Arizona and [model] Zhao Lei,” said DeCaro. “The people added this whole sense of [authenticity]. Usually, we tend to blur the background, but we kept the backgrounds in focus. It was important to make the model one with the environment.”

At the Imperial City in Hue, Muse and Lei stand in front of a slightly decaying palace, dressed in Etro and holding pinkies like shy lovers. Americana’s 50 retailers lent some of their most spectacular styles for the shoot. Examples include a dramatic royal blue Tom Ford dress with huge billowing sleeves attached to the bottom of the dress and Kaufman Franco’s long sequin gown with a sky-high slit. Muse stands in a boat on a lake towering over fishermen wearing straw coolie hats. Muse looks etherial in front of a wall of painterly-looking blotches in a David Yurman image. A shot of Muse in a café wearing Bottega Veneta looks shows the model looking similarly calm and sultry, warmed by the glow of golden lanterns. It belies the torrential rainstorm that lasted five hours and drenched the crew. “The Bottega image is steamy and a little bit elusive,” DeCaro said. “Just like the country.”