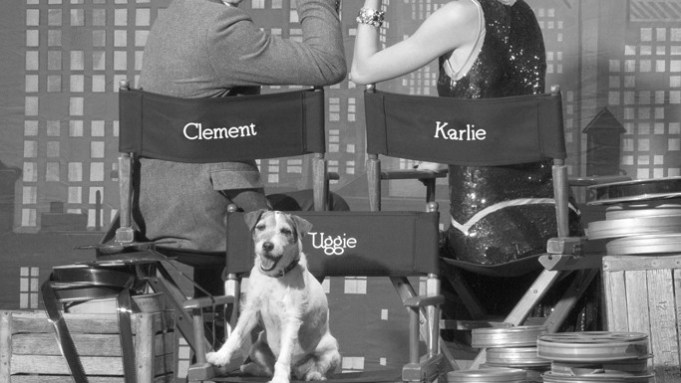 AMERICANA’S SILENT FALL: Long Island’s Americana Manhasset looked to “The Artist” for its fall catalogue, “Speechless,” an homage to black-and-white silent movies. The catalogue comes out in mid-August, when a short silent film, “Speechless,” and a behind-the scenes, silent look at the making of the book will be posted on Americana’s Web site. The “Speechless” film will also air on Taxi TV during fashion week. The Americana even hired four-legged star Uggie, the scene-stealing Jack Russell terrier who appears in “The Artist.”

Charles DeCaro, creative director of ad agency Laspata DeCaro, was smitten by the canine. “It’s as if he’s actually acting,” he said. “He has this sense of timing. He gets it. He’s really a star.” Karlie Kloss plays the ingenue and Clément Chabernaud is her costar. Each image has its own narrative, such as the one with Kloss, wearing a Burberry Prorsum coat, walking through a soundstage where “extras” dressed as Keystone Kops, Charlie Chaplin and Tom Mix play cards and read the newspaper. On a studio back lot, Kloss, in a St. John flapper dress, holds out an imaginary treat to a primed Uggie, and under the heat of spotlights, Kloss, wearing a beaded and fringed dress and cloche, kicks up her Jimmy Choos and does the Charleston.

Americana Manhasset chose the catalogue’s theme based on the fall collections, many of which “harkened to the past in some way, especially the Twenties and Thirties, but with a modern twist,” said Andrea Sanders, senior vice president and creative director. The catalogue was shot at Paramount Studios and several private homes in Los Angeles.