The cover of the May issue of InStyle, which will be revealed today and hit newsstands next week, proclaims in prominent type it is “The Beauty Issue.” For a magazine that has made beauty recommendations a key part of its brand, a reader can be forgiven for not realizing that this is a first for the title.

“There’s always a lot of beauty in it, but this is the first dedicated, large-font beauty issue of InStyle,” editor in chief Laura Brown said at her office in Time Inc.’s headquarters in Lower Manhattan.

“I really love the stories in the beauty world, but in a lot of magazines, it’s not adventurously reported. Like oh, we sent a reporter and talked to a dermatologist. Or oh, it does remove fine lines! And that’s fine, but I think there’s so much more to say,” explained the high-energy Australian editor, who came over from Harper’s Bazaar to take over at InStyle August.

Small redesigns such as larger images, cleaner lines and more first-person essays from celebrities contribute to the authentic, low-maintenance vibe that Brown seems to be going for with her refresh, which, after three issues under her leadership, is now in place. And, according to Brown, who better to illustrate this than comedian Amy Schumer, who is known for her candid, no-holds-barred persona?

“It was important to me to have someone representing beauty who is representative of more than a small part of the population,” she said. “Also, she has a voice. And that is really what I rely on and prioritize in every single person in the magazine. The fact that she looks freaking hot in a one-piece is no small delight.” 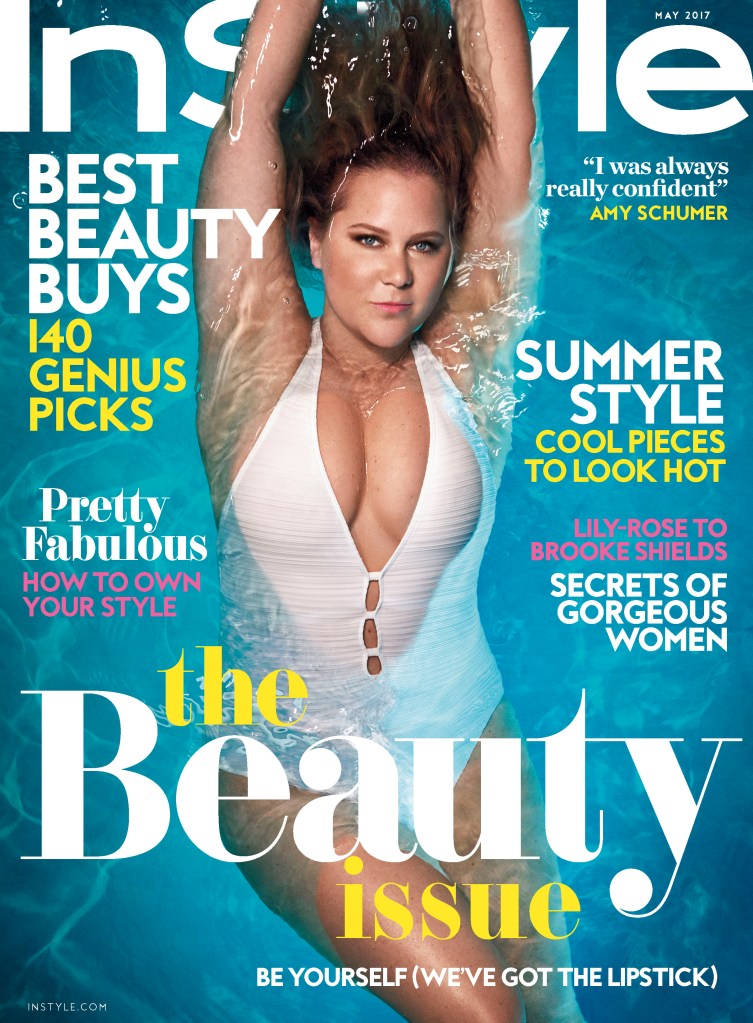 Carter Smith shot Schumer from above, floating in a pool while wearing a white Ralph Lauren bathing suit. The shoot was styled by fashion editor Cristina Ehrlich. (According to a representative from the magazine, the portrait was not Photoshopped).

An accompanying video (“Beyond the page,” Brown exclaimed. “You know, man, 360. That’s what they say”) shows how low-maintenance Schumer is. Her favorite beauty product? Toilet paper. Facials? She has had several, and liked them.

The cover feature takes the form of a relatively lengthy question-and-answer conducted by Jessica Seinfeld.

“You know how sometimes the interviews between friends can be really indulgent? It can be like, hey, babe, how are you, babe,” Brown said. “This one is really, really good. And I gave it 3,000 words, which never happens in InStyle magazine — or many others. It’s so funny. And just look at all these words.”

Other famous faces, in their own words, reflect on signature features. Brooke Shields writes about those eyebrows, Debbie Harry talks about her blonde hair, Nicole Richie weighs in on her skin, and Gabourey Sidibe contributed a column on vanity. Girl Boss Sophia Amoruso contributed a feature on starting over, following the bankruptcy of her company, Nasty Gal.

Another photo feature positions Freida Pinto posing with a vintage Ford Pinto. “This concept is no more advanced than wanting to do a story called Frieda and a Pinto. I’ve been wanting to do this for a decade,” Brown said.

Kiernan Shipka, with whom, Brown says, she has been “best friends” since she was 37 and the actress was 12, poses in pantsuits in various shades of red (she will be 18 in November). Some of the other celebrities featured in the magazine include Chloë Sevigny, Emma Watson, Emma Stone, Helen Mirren and Michelle Williams — all actresses who in some way exemplify the “Be Yourself (We’ve got the Lipstick)” ethos articulated in a cover line.

So far, despite overall print trends and the lingering question of Time Inc.’s potential sale, Brown seems to be off to a fair start. According to data from the Alliance for Audited Media, total paid and verified circulation totaled 1.7 million in January 2017, which represented a 1.6 percent increase over January 2016, while total single-copy sales increased 11.3 percent to 201,752. In February, total paid and verified circulation decreased 0.1 percent to 1.8 million in February 2017, while single-copy sales decreased by 18.6 percent to 217,404. Numbers are not yet available for March, which, to be fair, was the first issue following Brown’s relaunch.

“At Time Inc., I love that Essence is just next door and Time magazine and Food & Wine are just downstairs,” she said. “It’s not just skinny girls clinking around in heels all day.”