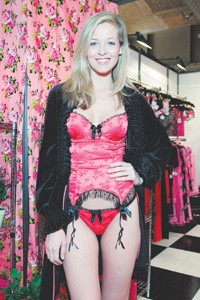 NEW YORK — If the celebrity-label craze in lingerie is cooling, designer names, lifestyle labels and licensed characters are still hot properties in the licensed lingerie arena.

While the demand for glamorous names from the motion picture, TV and music industries continues to fill the tabloids, the big demand in apparel —

especially lingerie — is for aspirational products and brand integrity, whether it’s the cachet of a fashion icon, a lifestyle statement that’s classic or sexy, or a licensed character that’s either hip, irreverent or lovable, according to executives.

Two power names that continue to add bling to the lingerie field include model Elle Macpherson, whose Elle Macpherson Intimates, produced under license by New Zealand-based Bendon, was introduced to the U.S. market in 2005.

The latest comer to the lingerie fold is Playboy Intimates White Label, a line of sultry styles that fulfill the “Playboy lifestyle fantasy” for men as well as women, according to Aaron Duncan, senior vice president and creative director of global licensing at Playboy Enterprises International.

The high-end line was launched in Europe this fall and counts five licensees: BCI in the U.K.; Kyra Mode in Thailand; Sansei and Renown in Japan, and Keys International in Hong Kong and the U.S. The

“It’s not just about taking the bunny logo and slapping it on lingerie. It’s about being sexy, living the good life,” Duncan said.

Playboy’s most recent foray into intimates was in May when founder Hugh Hefner celebrated his 80th birthday during a European tour to hawk the introduction of Playboy men’s underwear, as well as the international syndication of the reality TV show “The Girls Next Door” — a provocative glimpse into Hefner’s hedonistic lifestyle at the Playboy Mansion with his three live-in girlfriends, Holly Madison, Bridget Marquardt and Kendra Wilkinson.

The White Label collection served as costumes for models and dancers performing at parties in London, Paris and Cannes, France. The girlfriends often wear Playboy White Label and Pink Label lingerie on the TV show, as well as a line of underwear and daywear called The Girls Next Door.

But when it comes to lingerie licenses, lifestyle statements cover a variety of tastes and preferences.

In contrast to Playboy’s racy persona is the homespun image of the 130-year-old Jockey brand.

Milou Gwyn, vice president for domestic licensing at Kenosha, Wis.-based Jockey International, observed, “There’s a circling back to those assets that Jockey has — being down-to-earth and very approachable. It’s the mainstay basics that people reach for on a daily basis.”

“We are exploring a couple of expansion categories,” said Gwyn. “We want to build on the success of basic bedding and layer that business with top bedding. We’ve also done a lot of consumer research and are exploring women’s swimwear.”

“Reaction has been very strong to licensed sleepwear for the sequel of this summer’s movie ‘Pirates of the Caribbean, Dead Man’s Chest,’ starring Johnny Depp. We have lots of great new visual concepts for sleepwear that kids and adults reacted strongly to when the original film was released,” said Leeds.

Meanwhile, industry executives generally believe that the innerwear industry’s flirtation with Hollywood may have peaked in 2004 with a slew of glamorous lines that included the licensed JLo Lingerie by Jennifer Lopez at The Warnaco Group, Susan Lucci Intimates on the Home Shopping Network and Pamela Anderson Intimates at Vandale Industries, which was discontinued in 2005 after a one-year stint at retail. Over the past year, scores of celebs, including Christina Aguilera, Anna Nicole Smith, Paris Hilton, Jaime Pressley and, most recently, Elizabeth Taylor, have been on the hunt for intimates pacts.

But there haven’t been any official licensing announcements, and most makers of sleepwear, daywear, bras and underwear said the main reason celeb licenses have been on the decline is limited product development and marketing support on the part of the celebrities. Star power doesn’t necessarily equate with staying power, said executives.

Assessing the prerequisites for a successful license, David Komar, vice president of marketing at The Komar Co., noted, “In any licensing venture, whether it is based on celebrity, designer or character, the product must be paramount. For us, maintaining the integrity of the brand is what drives sales and leads to success.

“Vera Wang [intimates] is a true lifestyle brand with a strong emotional connection to the consumer,” said Komar. “She expects great product. Our customers are smart and have many choices. Fads in licensing come and go, but we prefer brands with strong values and longevity.”

Carole Hochman, chairman and design director of Carole Hochman Design Group — which includes the licensed Oscar de la Renta, Lauren Ralph Lauren and Betsey Johnson Intimates collections — described the lack of interest in star deals this way: “We are successful because we work with strong people like Oscar, Betsey and the Ralph Lauren people, who have a vision and bring concepts to the table. We’ve had a long list of celebrities and movie stars who have come to us for licenses — we get a call every day. I say thank you, but tell them I wouldn’t know what to do with them. Their name doesn’t stand for anything in fashion.”