Naomi Campbell, Diane von Furstenberg, Carolina Herrera, Anna Wintour, Marc Jacobs, Bethann Hardison and the Savannah College of Art & Design’s Paula Wallace were part of the fashion crowd that was out in force to salute Talley more than three months after his death at the age of 73. Upon entering the landmark church at 132 West 138th Street, attendees were blasted with the fragrance of flowers emanating from four massive urns exploding with white dogwood branches, rows of fully blossomed white peonies, white hydrangeas, white larkspur and a wall of greenery.

Before delivering the eulogy, Reverend Calvin O. Butts III noted an iconic photograph taken by James Van Dee Zee of the church at the funeral of Adam Clayton Powell Sr.’s daughter Blanche. “This sanctuary was arranged like none other. But today I think we run rival that with this display of flowers, which is befitting for the opulence and often arrogance of André Leon Talley.”

Butts said, “Many of you know that André didn’t want this. He was — with all of his flamboyance and all of his opulence and his ostentatiousness at times — he was a very humble, quiet and peaceful soul.”

Attendees learned that Talley bequeathed 100 percent of what he had – which was described as “very significant” — to charities. He left all of his intellectual property to his churches in North Carolina and to the Abyssinian Baptist Church, according to Deacon Alexis Thomas. He also left some of his estate to SCAD. 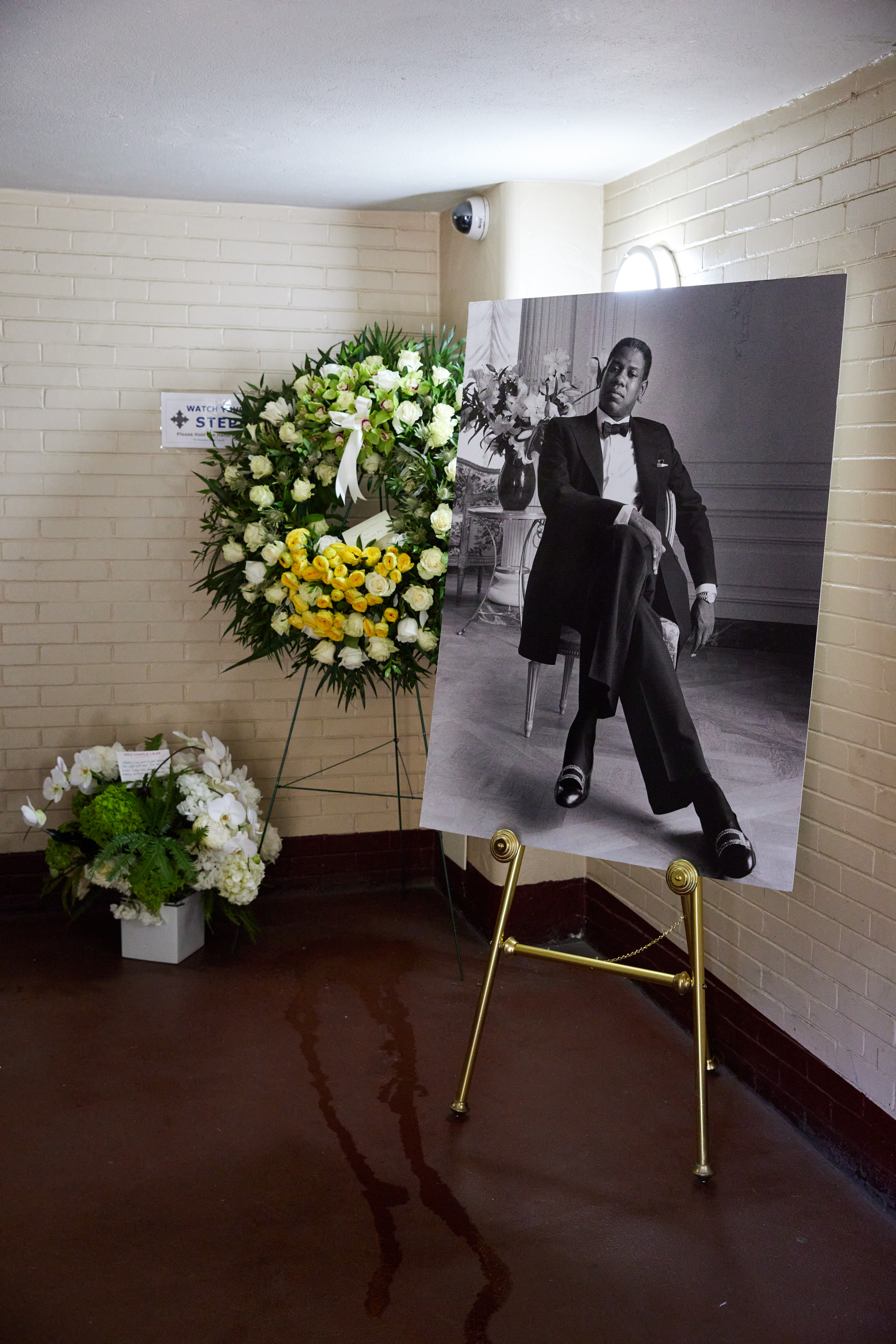 Before the David Monn-designed event got fully underway, a letter from Michelle Obama was read by Butts. The former first lady described Talley as a “one-of-a-kind presence who changed the face of fashion and beauty for a generation of girls just like me. He will be missed but I know his legacy will continue inspiring people for years to come.”

Wintour, who first met Talley at Vogue, broke down in tears during her speech and was later consoled by her son Charlie Shaffer at length.

“I will never forget André crossing the Atlantic to be with me at my mother’s funeral, when my husband and children were stranded in New York in a blizzard. And I will never forget summer weekends he spent with us on Long Island — long, warm evenings where he lifted up my family with his exuberance and his wit just as he lifted up dinner tables among the great and the glamorous. He was generous with his time and his charisma and with his heart,” she said during her speech.

Wintour, who made no mention of her falling out with Talley, continued, “The night before the Met he sent an inspired note to my daughter with a characteristically precise vision of her hair: ‘A soft, loose knot, clean off the neck. It can’t be messy, but it has to look like you caught it in one twist like a soft figure eight caught with the same color band as your hair, like you’ve just come off the tennis court.’ Perfect.”

Wintour said, “It always seemed to me diminishing to hear André described as the life of the party. He was life itself — alert to the beauty of passing moments and lasting relationships. Even to the perfect soft figure eight in a young woman’s hair. He changed my own life in ways that I can’t count, introduced me to remarkable people, helping me to recognize the excitement of new ideas and giving energy and sweetness to my time with those that I loved. We were partners in the strange adventure of one another’s lives.”

As was the case with Wintour and a few other speakers, Marc Jacobs paused emotionally speaking of Talley. Church officials standing in the wings instinctively offered him words of encouragement. “The allure of André was truly metaphysical and is impossible for me to articulate. André would always hold my hand in such a way that felt like the purest expression of love, friendship, protection and guidance. He was my high priestess of fashion, the keeper of the kingdom to everything that inspired me, having seen and lived through all of it.”

Recalling how Talley once got detained at customs in Moscow, “following Naomi’s advice that a visa was not required,” Jacobs declared — gesturing toward Campbell and asking if she remembered that; the supermodel nodded approvingly. “He rolled his eyes, he raised his eyebrows and sucked in his lips as he glamorously dwarfed the miserable, tiny fiberglass chair in his brown velour tracksuit, dripping in Louis Vuitton-monogrammed mink, as the [Russian customs] officer looked over and said, ‘Nyet.’

“When André was eventually released we spent four glorious days being shown around Moscow and St. Petersburg. When it was time to leave, we were stuck on the tarmac in a queue behind such luminaries as Elton John and Bill Clinton. Racing back to have a Thanksgiving dinner that I was hosting [in Paris] for 26 people, including our very dear friend Lee [Radziwill]. At home, we were divided between the dining room and the library for the most festive American in Paris Thanksgiving dinner imaginable. André’s booming voice, shrieks of joy and exaltation echo in my head as they did in the house that most special night. André wrote, ‘I can never forget that Thanksgiving sitting on the tarmac waiting and wanting to get back to Paris in time.’ I think LV [Louis Vuitton] put us up at Le Meurice. Life was so perrrrfect — the golden age of style we lived through.”

Hardison, who first met Talley wearing an Eagle Scout uniform at Andy Warhol’s Factory, said, “I was sometimes André’s conscious and sometimes the pain in his butt. But I always told him what I thought and I always told him what I felt. I appreciated his love and his support. I also loved the fact that he tried so hard to help me in so many ways, especially when we were trying to change how we saw things. At the end of the day, I really appreciated him because we kept each other’s secrets. We have a lot of secrets. He’s left with a lot of mine and I have some of his. I am very proud of him and what he has become. I’m glad that he didn’t suffer long, that he was gone quick and that he became someone in our hearts and our minds. You will always remember him because he’s the cool guy. He’s the guy who basically stepped up and stepped out.”

Herrera said, “André, you were the most amazing friend. You were unique and you will never be replaced by anyone. Your knowledge and love for fashion made you a passionate critic. You were the fashion historian of our times and your legacy will live with us forever. Rest In Peace, my very dear friend.”

Playing the piano and offering this recollection as an introduction to “Ain’t Nothing But the Real Thing,” a song she co-wrote, Valerie Simpson said, “Last night I was at my club. It’s called the Sugar Bar and the highlight of the evening was a video by The New York Times of André and Whoopi Goldberg coming to the Sugar Bar after fashion week. See, he came to me to party. He would sit down right in front and he had a tambourine which he always played. I was trying to think of adjectives for this giant of a man but they failed me. But I will say he was — for sure — authentic, one-of-a-kind, took up all the space all the time. That voice. That presence. That way of being, being felt, being seen. No, no, no – he wasn’t no copy of nothing.”

SCAD’s Wallace spoke of Talley’s contributions to the school as a longtime member of the board of trustees and its students. “Another great joy was the creation of the André Leon Talley Gallery at the SCAD Museum of Art, which he always referred to expansively as ‘his wing.’ André was fond of saying that the greatest luxury for him was crisp white sheets drying on the line. I think he so treasured that memory because it reminded him of the loving care given to him by his grandmother Bennie Francis Davis. He wrote one day, ‘I often think of my final memory of her. I was napping on her red velvet Regency chaise. She came over on her walker and pulled the blanket closer to my chin. I woke as she stood over me, protecting. She turned and left me there to sleep.’”

Campbell, who had swept into the church earlier in an all-white ensemble and fascinator, spoke haltingly at times of Talley, “Often in our business we don’t really take time to know where someone comes from….But earlier this week in North Carolina with Diane von Furstenberg I finally had the honor to meet some of your childhood friends and your family and to see where you got your signature grace, elegance and dignity. It was so moving to be there amongst your loved ones.”

The supermodel said, “André anointed people by just showing up for them — no matter what. He not only pushed you to be the best version of yourself, he taught you how to do it. For so many of us, when you were starting off in this industry and you felt like you didn’t have a voice, André would often be that voice for us, asking valid questions, advocating on our behalf until we learned how to ask what we wanted ourselves.”

Campbell said, “His belief that the world was for the taking was simply contagious and he pushed me through boundaries I never thought I would cross.”

She recalled, “A few years ago André joined me in Lagos, Nigeria, at the fashion week — an event everyone said to me he would not come to. But he did. He showed up for me. There he was in a wheelchair, cloaked like a king with the Nigerian creatives sitting at his feet, listening to his wisdom.”

Speaking of Talley, von Furstenberg said, “You and I were very close friends since 1974. We traveled together, laughed together, fought sometimes as you were not always easy. But for 48 years we were always there for each other.”

She said, “You had a very successful life because you managed to design the life you had dreamt of. You spoke perfect French — the language you wanted to learn. You traveled to and visited all of the places you wanted to see. You met all the people you wanted to meet….For decades you loved fashion, wrote beautifully and mentored so many designers. It has been an honor and a privilege to be your friend, to respect you, to admire you and to love you. Rest in peace ALT — always loving and tall.”