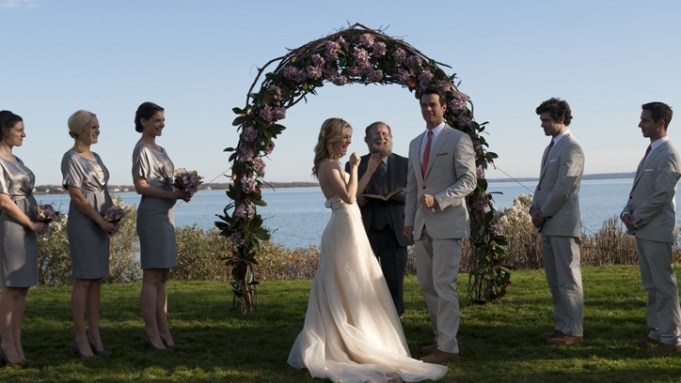 As Sookie Stackhouse on HBO’s cult hit “True Blood,” Anna Paquin has, for three seasons, shown herself to be unflappable in the face of vampire sex, Christian Evangelist armies, medieval demons and short shorts that would make a Victoria’s Secret angel blush.

This month, the 28-year-old actress explores a different — and more clothed — side of herself in the charming indie film “The Romantics,” produced, directed and written by Galt Niederhoffer and based on her novel of the same name. (The Cinema Society is hosting a special screening of it Tuesday.) Paquin plays Lila, a prim, privileged New England girl celebrating her wedding night with her eccentric tight-knit group of college friends. The hitch? Lila’s groom-to-be (Josh Duhamel) is the ex of her maid of honor (Katie Holmes). Naturally, drunken mayhem ensues.

“On the surface, she’s got it all together: she’s marrying the perfect man; she’s got the perfect house; she’s very in control of everything,” says Paquin of Lila. “And over the course of that weekend, you see it crack, crumble and completely fall apart.”

WWD: Do you see Lila as a likable character in any way?
Anna Paquin: She likes what she wants when she wants it and she’s probably stepped on a few people on her way to get there. But she’s not a terrible person. She loves her friends and it doesn’t come from a horrible place — she’s just quite controlling.

WWD: She stole her best friend’s boyfriend and is marrying him.
A.P.: Well, you know, there’s some gray area in that.

WWD: You’ve said the idea of planning a wedding “scared the s–t out of [you].” Was shooting this film fear immersion?
A.P.: Lila and I have pretty much nothing in common as far as the bride gene, so it was kind of entertaining. I’d actually never been to a wedding [at the time of shooting]. So it’s all kind of a slightly foreign world to me.

WWD: Lila is quite different from your work on “True Blood.” Now that Sookie has become such an iconic character, are you concerned about typecasting?
A.P.: Not even slightly. I don’t suffer from being one of those people who’s so exceptionally — how do I put this nicely — model-like looking that my face will look exactly the same no matter how you dress me. I find that pretty easily if you restyle it, I look different.

WWD: After three seasons on the show, where you obviously take many physical and emotional risks, has there been anything you’ve said no to?
A.P.: Very few things. And most of them involved the raw meat statue last season [part of a pagan ritual in the medieval demon plotline]. I’m a little squeamish about touching raw meat. [Paquin is a former vegetarian.] When I was basically supposed to body slam the meat statue, I have to admit that I let my incredibly gifted and wonderful and brave stunt double do it.

WWD: And the nudity and sex?
A.P.: That doesn’t even blip on my radar as far as being a big deal.

WWD: So has this show made you realize where your boundaries lie?
A.P.: As it turns out, I have very few boundaries when it comes to what I will or will not do. On camera at least. Because ultimately, it’s not me. And I know that’s what every actress says, but it’s true — you’re just playing a character. I’m sure loads of those big action-star men at home are nice, normal family men who actually don’t shoot or beat up people.