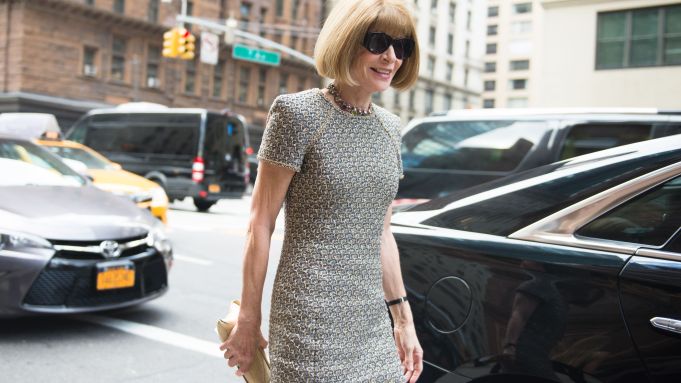 It’s the end of the summer and most employees at Condé Nast are either on vacation or leisurely working through the remaining days leading up to Labor Day weekend. The same is true at Vogue, which sits on the 25th floor of One World Trade Center in New York — but there’s a different sort of energy, a quiet, yet hurried one. The sound of hangers skimming the metal poles of clothing racks intermingles with chatter from editors, who are finishing up end-of-the-year projects while their boss, Anna Wintour, is on holiday, enjoying the last relaxing days before the rush begins for New York Fashion Week and then London, Milan and Paris.

Their work will close out an important year for Vogue, which is feting its 125th anniversary with a host of collaborations, a new conference and editorial projects that nod to the magazine’s past and current mission. The anniversary also comes at a challenging time for print media and fashion magazines in particular, which are still honing their digital voices while working to develop new revenue-generating brand extensions in the face of waning print advertising.

For Vogue, which many view as the crown jewel of Condé Nast, the occasion has provided a moment of reflection on what the publication means today and whether it still holds the same gravitas as it did decades earlier.

Nobody is better able to answer that question than Wintour, who’s been the magazine’s editor in chief since 1988 and, for the last four years, also artistic director of Condé Nast, a company where she built her reputation as one of the most cunning, influential and intimidating editors in fashion — and became a pop-culture figure around the world in the process.

But the landscape has changed since Wintour began her Condé career at Vogue 34 years ago.

Speaking broadly, she thoughtfully addressed the dominant force that is sapping power away from magazines — even hers — explaining that technology has given a platform to everyone, creating the effect of “information overload.”

“I think we’re living, in terms of media, in a very democratic age, but I think that we still look at everything through the lens of Vogue and through our own point of view,” she said, of her title’s mission today. “In the fact that Vogue is someone that can help guide enormous audiences through this fascinating world, I would like to think we are as influential and actually are now reaching so many more people than we ever dreamt of back in the Fifties or the Sixties.”

When asked if she feels as influential as ever, Wintour, whose power-playing persona is the red meat of every Hollywood characterization of a bitchy fashion person (exhibit A: “The Devil Wears Prada”), paused. “Personally?,” she said sheepishly. “That is something I never think about.”

Part of Vogue’s mission, according to Wintour, is to give its audience a “point of view and a point of difference,” via its collaborations with celebrities, brands, designers and artists, among others. The editor pointed to Vogue’s September issue as an example, which features Jennifer Lawrence on the cover. Even though Lawrence was far from an edgy choice, Wintour explained that the “iconic” American actress could be depicted in a Vogue way by tapping today’s great photographers for additional cover images. In a twist, Vogue also asked artist John Currin to paint a portrait of Lawrence. That work of art would become one of the multiple covers of the issue. The issue is emblematic of how Wintour thinks about print these days, namely that it has to be “memorable” and “be something you can’t find so easily online.”

Elaborating, Wintour said, “I think what you have to do in print is to create even more memorable images and more memorable pieces because what one consumes online or in social has a much shorter shelf life, so to speak, so what print has to have is no more weight, but it has to be something that you can’t find so easily online. It has to really stand for print.”

She continued: “I get asked all the time, what do you do differently than 10 years ago or what will you do differently in the years to come? In the years to come, I have no idea. Did you know we’d be living in an Instagram age or a Snapchat age five years ago? I mean, I’m not an engineer. I don’t work in Silicon Valley. I’m thrilled there are people who can create these amazing channels and our job is to think how we can best use them to create the best content that we possibly, possibly can.”

But what signals the new era for Vogue, and other print publications, is what the title has to build around the anniversary. In the old days, a 125th anniversary issue (or even the September issue alone) would suffice, since it would be telephone-book thick, (remember telephone books?), with ads that would guarantee the magazine and Condé would have a successful year.

No longer. The magazine now is supplementary to a number of other revenue-generating branded licensed product deals Vogue has done for the anniversary with a mix of brands, including Pressed Juicery juices, Comme des Garçons pochettes, a Lord & Taylor capsule collection designed by Karl Lagerfeld, a beauty box from Birchbox, Soludos espadrilles, colorful sweatshirts from Kith, tote bags by Marni and a long-sleeve T that says: “Never Trust a Vogue Girl” designed by Hood by Air, among others.

“Revenue is revenue,” said Vogue chief business officer Susan Plagemann. When asked if the high-low mélange was off-brand for Vogue, she said: “It’s not about do we do something for the sake of doing it but what keeps the integrity of who we are.”

She offered up the Met Gala special edition publication as a new-ish successful example of an on-brand revenue driver, as well as the September issue, which retails for a pricey $9.99. Both speak to “key moments” in which consumers “can’t live without us,” Plagemann explained.

Despite Vogue’s ability to trade on the influence of its famed editor, its storied past and new brand extensions, the magazine, like its rivals, is feeling the pain of the volatile media landscape, in which consumers are buying less print and reading a variety of digital publications.

On the web, Vogue’s U.S. site has also struggled to massively move the needle given its large staff of roughly 60 digital reporters and other resources. From January to July, the title’s average monthly unique web visitors equaled 6.2 million, up 1.2 million from the same period in 2016.  The site hit its all-time traffic high in the last two years with 7.5 million uniques in May, thanks to the Met Gala, but that figure is dwarfed by some of the bigger players at Condé Nast, such as The New Yorker, Wired and Vanity Fair. (Vogue’s international web footprint is larger than the U.S. site, a spokeswoman said, but declined to provide figures).

Complicating matters is that 90 percent of vogue.com readers do not read Vogue in print, a statistic that Plagemann said she finds “awesome” and Sally Singer, Vogue’s creative digital director, is energized by. In order to attract and retain new readers, Singer said she spends time developing the aesthetics and utility of Vogue’s online platforms. Editorially, her way of driving traffic is bit harder to characterize.

“You want to be brilliant and ubiquitous,” Singer said of her digital mantra. “I never think this [story] is only sitting on Vogue, I say, this is sitting. So it’s got to sit there alongside the other publications I respect, and the other world I respect in terms of discourse.”

Her focus isn’t about driving traffic through viral news, which she calls a “cheap, fast strategy,” nor is she about breaking news.

“That’s just cheap traffic,” she said of reporting rumors. “Usually when another publication has the scoop in fashion, we know it. We’ve already got it but we won’t run it until it’s confirmed, like actually confirmed by the house.”

Instead, Singer prefers to shed light on cultural, political and fashion and style stories through reporting or “real opinion,” or original photos or video produced by Vogue.

For the anniversary, Singer’s team has depicted diversity through photo packages called “American Women.” Those photos showcase a diverse range of women from different socioeconomic backgrounds, races and sexual orientations.

Indeed, representing diversity is a mission now at Vogue and to some extent at Condé Nast, which has been criticized — along with other fashion-centric magazine publishers — for their lack of it up until now. The publisher has made an effort, shepherded by Wintour, to hire editors in chief of color, and it recently formed a diversity committee led by Wintour and The New Yorker’s David Remnick.

As Condé continues to evolve with the times and a new generation of editors are ushered in while old hands like Graydon Carter and Robbie Myers are heading for the door, there is a natural question about Vogue and its identity — and the role that Wintour plays in fashion and beyond when she ultimately retires. Can anyone fill her designer shoes?

Condé Nast Employees Brace for Yet Another Reorganization