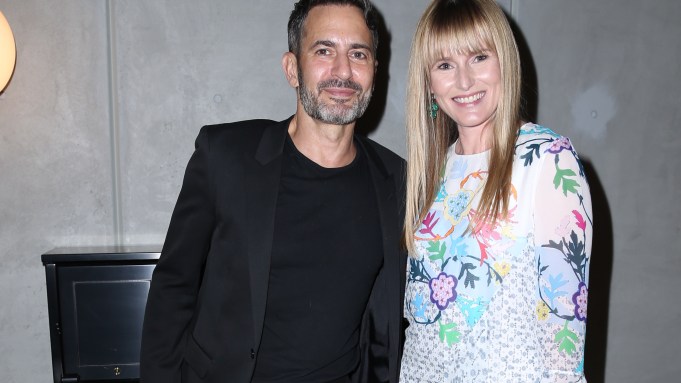 Last night, Spring Place, the expansive member’s only event space in TriBeCa, had somehow turned into a congested corner with a steady stream of fashionable types paying homage to Amy Astley, the new editor in chief of Architectural Digest.

The fashion-heavy group was there to toast Astley’s first full issue since taking the helm and, fittingly, it was the magazine’s September style issue.

The crush of the crowd temporarily dissipated and reassembled near Jacobs, who strolled in with two dogs.

“Doggies!” said a partygoer, who shrugged when it was noted that the celebrated designer was the man holding their leashes. Photographers circled Jacobs and Astley, snapping photos, while the dogs received pats on the head from guests.

Perhaps it was fitting that the dogs were getting much of the attention — Neville, Jacob’s bull terrier, is the cover model of AD’s September issue.

Astley featured Jacob’s home in the issue, but instead of using an image of the designer on the cover, she decided to go with Neville, who has a robust Instagram following of 190,000. (Jacobs’ personal account has 552,000, which isn’t bad for a human celebrity.)

“The September issue, I think gives you a strong sense of where I’m going,” said Astley, who sidestepped the crowd for a few moments to chat. “I loved all the personality in it, and the sense of life of bringing the houses to life. I love an interesting person living an interesting life in an interesting house. I’m very much driven by that.”

She offered that she wouldn’t be making a habit of using celebrities on covers — or their pets.

“It’s really about a great interior — it’s Architectural Digest,” the editor said, but explained that in this instance she “wanted to have fun” and infuse the magazine with “a little humor.”

Astley, who served as the editor in chief of Teen Vogue since it launched in 2003, said she has come “full circle” in her career.

“I started at House & Garden and know so many of the people in this room from that world,” Astley said before turning to her mission for AD. “Now when you edit a magazine, you think, ‘what would be exciting that I can translate digitally?’ ‘How can this content live in print, live on a web site, live on a social platform?’ That’s something I did so much of at Teen Vogue. I got to really hone that.”

As the night wore on, another key guest arrived: Wintour, Condé Nast artistic director and Vogue editor in chief, who dropped by after making an appearance at an earlier party.

Wintour circled the bar before making her way to her protégé, whom she put in the top job at AD and Teen Vogue before that.

“Congratulations,” said Wintour with a smile, as she embraced Astley. The two posed for photos and had a quick chat before Wintour was out the door and on to the next thing.