‘The Anna Wintour Musical’ Returns and Ivanka Trump Is Next

Creator Ryan Raftery is revisiting the show that put him on the New York theater map before debuting his cabaret take on Ivanka Trump.

Anna Wintour, a theater fan, in July at the opening of "Moulin Rouge! The Musical" on Broadway.

His comedic portrayal of her launched him onto the downtown New York theater scene. She donated a pair of sunglasses to a charity show. She’s never sued. But Ryan Raftery, creator and star of the comedic off-Broadway “The Anna Wintour Musical” has only met the woman herself once.

It was by chance in an elevator a few months ago, according to Raftery, who’s gearing up to reprise his role as a stressed, constipated and Vodka-swilling version of Wintour at Feinstein’s/54 Below for two nights only on Sept. 4 and 5.

“I said hello to her, she was on her Blackberry and she looked up and said something along the lines of ‘Of course,’ so I think she’d already recognized me,” Raftery recalled. “I just said, ‘Thank you so much [for donating to a charity auction benefiting The Trevor Project]’ and she said ‘Of course’ again and then we were in the lobby and I said ‘After you’ and she got out.”

It may sound anticlimactic to a layperson, but to someone who wrote and stars in a cabaret act full of parody songs like “Drunk at Vogue,” an act that got enough press coverage to be “an instant game changer” for a performance career, it was a real moment.

“I told a friend of mine who knows her after, like, ‘Oh, I don’t know what to think,’” Raftery said, alluding to Wintour’s aloofness. “He was like, ‘Did you want her to hug you? That’s about as good as it could have gone.’ And he was right.” 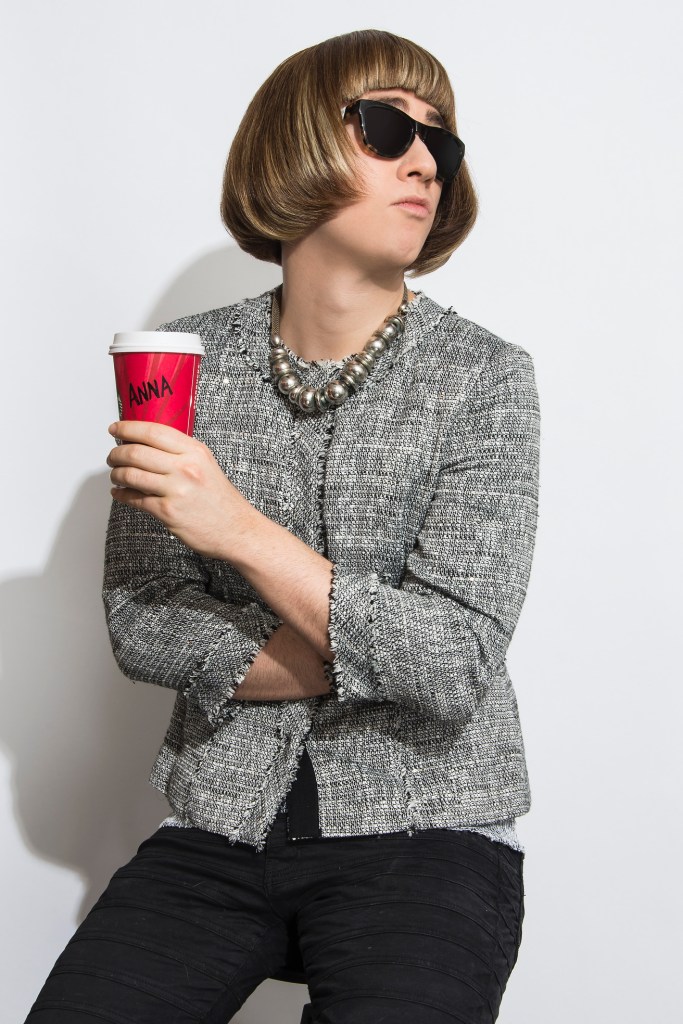 The show debuted in 2014, so this marks the fifth anniversary, but it’s been updated to include a new duet with a Grace Coddington character. Wintour and Coddington sing a parody of “Class” from the musical “Chicago” that’s instead about the casualization of modern dress. Coddington, with her popularization of day pajamas, must participate ironically.

It’s been about two years since Raftery last put on his blonde bobbed wig, tweed and pitch-black sunglasses to portray Wintour. In the interim, he’s put together portrayals of Andy Cohen, Martha Stewart and Calvin Klein (which included a storyline featuring Donna Karen as a maid-cum-design-star that the woman herself was apparently not happy about) in the same style of parody cabaret. His next show is a portrayal of Ivanka Trump and it’s proving more challenging.

“I’m not gonna lie, it’s not fun,” Raftery said. Not only is the exhausting news cycle stretching out the research phase, but Trump’s concentrated and calculated form of femininity is much different from any of the other characters he’s done, as is the gap between her public words and her father, Donald Trump’s, actions. The logline is Ivanka Trump unwittingly becomes a Russian sleeper agent after the country has a disagreement with her father and as she comes to realize what’s happened, two sides of her personality fight it out. But Raftery is still writing and working out the details before it debuts in February at Public Theater.

“I’m a comedian first and foremost, but I’m not going to make light of the entire thing and I don’t want anyone to come and expect the low-hanging fruit,” Raftery said. “It’s not going to be SNL’s ‘Complicit’ commercial as a 70-minute show.”

Anna Wintour Gets a Little Personal With Tina Brown