A documentary about the fashion world is causing the biggest buzz... Tomaso Galli is leaving... Rumors are flying that Geordie Greig... 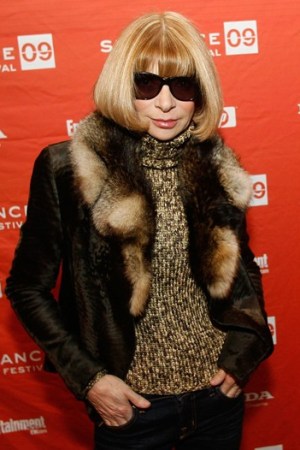 ANNA’S MOUNTAIN HIGH: At a Sundance Film Festival crammed with films about the human condition, international political strife and old-fashioned romance, a documentary about the fashion world is causing the biggest buzz. “The September Issue,” R.J. Cutler’s two-year-long project about the making of Vogue’s September 2007 edition, oversold at its Friday premiere and three public screenings between Friday and Sunday, and its press and industry screening played to a packed house on Saturday. There are two more screenings on Wednesday and Sunday. The 89-minute film will air this year on A&E at a yet to be determined date.

Several people who bought tickets to the Friday premiere in Salt Lake City, a 45-minute drive from the festival headquarters in Park City, were turned away because there were more ticket holders than available seats.

This story first appeared in the January 20, 2009 issue of WWD. Subscribe Today.

One studio executive who paid for tickets, which cost several hundred dollars each, said the $5,000 all-access pass holders get precedence at any screening, and if all of them happen to be interested in a particular movie, then ticket holders are out of luck. Vogue editor in chief Anna Wintour arrived late into town so she didn’t make Friday’s premiere, but did show up at the late-night premiere of the Mexican soccer comedy “Rudo y Cursi,” starring Diego Luna and Gael García Bernal, and a casual dinner on Main Street. She attended a public screening of her magazine’s documentary on Saturday afternoon, held in a converted temple and, along with publisher Tom Florio and Cutler, walked a mini press line set up in an upstairs reading room, shielded from any uninvited paparazzi. And the obvious question about the editor of a major fashion magazine was: What was she wearing? Wintour, clad in a leather Michael Kors jacket with a fox collar, an Oscar de la Renta turtleneck, J Brand jeans and Manolo Blahnik boots, said she was “channeling mountain casual. It is actually my first time wearing jeans to work.” But a relaxed Wintour was quick to deflect the spotlight back to Cutler, who also produced the award-winning documentaries “The War Room” and “A Perfect Candidate.”

“This is very much R.J.’s film. I want to make it very clear that he had complete freedom to put together the movie that he wanted and it’s not in any way Vogue behind him telling him what he can and cannot do,” she said. Asked if she placed any restrictions on filming or editing, Wintour replied, “He showed us the film a little while ago and we made a few suggestions, all of which he ignored.”

For his part, Cutler said, “I don’t know that I’ve ignored them all but I will say that everyone was incredibly supportive of my vision and also very open with their opinions.”

The film has garnered mostly positive reviews, though some have commented that Vogue appeared to be given the kid-glove treatment due to the admiring portrayals of Wintour and creative director Grace Coddington. September 2007 cover girl Sienna Miller didn’t fare as well, drawing criticism for her hair and teeth (pre-hairstyling and retouching). Also featured is Thakoon Panichgul, as the film recorded Wintour’s support of him through the CFDA/Vogue Fashion Fund GAP collaboration, editing his white shirt sketches, and revealed how she brokered a well-paid consulting gig for him at the Spanish company Mango. “I’m always fascinated by people who are very good at what they do,” said Cutler. “I learned that the fashion industry is a lot of things. It’s glamorous and workaday, exhilarating and exhausting, exciting and thrilling, and rewarding and tough.”

When asked if Wintour intimidated him at their first meeting, Cutler said, “You try to focus on your curiosity. But I wore all new clothes and I got my first manicure.” — Marcy Medina

GALLI EXITS: Prada SpA group communication and external relations director Tomaso Galli is leaving the Italian fashion group for personal reasons. Galli said Friday he plans to leave the Milan-based company in March to move to London, where he will continue to work with Prada on a consultancy basis. He declined to give more details. The group, which owns the Prada, Miu Miu, Car Shoe and Church’s brands, has yet to name a replacement. Galli joined Prada in November 2004, from Gucci Group, where he was corporate communications director and worked closely with Domenico De Sole and Tom Ford, including in the run-up to the company’s initial public offering. — Andrew Roberts

WILL GREIG SAY ‘DO SVIDANIYA’?: Rumors are flying that Geordie Greig, the longtime editor of the London-based Condé Nast style title Tatler, will be named editor-in-chief of London’s Evening Standard newspaper, when — and if — Russian billionaire Aleksandr Lebedev buys it. Lebedev, a former KGB agent, close pal of Mikhail Gorbachev and the owner of spectacular Stud House on the grounds of Hampton Court Palace, is in talks to buy the tabloid, which is edited by Veronica Wadley, and is known for its weekly ES Magazine — a newsy style glossy. The Russian is currently negotiating to buy a majority stake in the paper from Daily Mail & General Trust, and the deal is expected to be done by the end of the month. According to a report in The Guardian newspaper Friday, Lebedev has lined up his friend Greig to take over the helm, although nothing has been finalized. A spokesman for Lebedev did not return phone calls Friday. Evgeni Lebedev, Aleksandr’s son, who is working on the deal with his father, said: “Nothing is signed yet, so I can’t comment.” A spokeswoman for Condé Nast said Greig isn’t going anywhere — for the moment. “I see why people are making the leap. He and Geordie are extremely good friends, and they’ve known each other a long time. If Mr. Lebedev buys the title, he will inevitably have a conversation with Geordie about potential editors, but no conversations have taken place. It’s not at that stage,” she said. — Samantha Conti

EVERYBODY STILL LOVES JEN: It seems Jennifer Aniston is still a main attraction on the newsstand. The “Marley and Me” star was featured on the cover of both GQ and Vogue around the release of the movie, which in turn posted big single copy sales for both fashion titles. Vogue made a splash with its December issue, which featured Aniston in a red Narciso Rodriguez dress and a quote from her interview with contributor Jonathan Van Meter: “What Angelina did was very uncool.” The quote referred to Angelina Jolie talking at length to the press about how her relationship with Brad Pitt developed while he was still married to Aniston. That move stirred controversy among the bloggers and from Aniston herself, criticizing the magazine for its tabloidlike approach in promoting the story. Despite the criticism, the strategy worked: Vogue sold an estimated 465,000 single copies of the issue, outselling the December 2007 issue by nearly 65,000 copies.

At GQ, the men’s monthly made its own splash with a nude Aniston — save for a strategically placed striped tie — on its January cover. The photos provided titillating copy for blog posts, news items and e-mails, generating so much buzz the issue sold 370,000 copies, according to early estimates. That’s GQ’s best single copy sales results in 10 years, according to the magazine. Aniston’s nude photos also sold better than when she posed topless on the December 2005 cover — that issue sold 336,898. The January 2008 issue with Josh Brolin on the cover sold 177,700 copies. The magazine’s December issue, its Men of the Year package, also outperformed recent ones, thanks to one particularly popular politician. The magazine published four different cover images with “Mad Men” actor Jon Hamm, Leonardo DiCaprio, Olympic gold medalist Michael Phelps and President-elect Barack Obama. That issue sold 270,000 copies — an 18 percent improvement over December 2007’s issue. — Stephanie D. Smith