It was something morning TV viewers have not seen in more than a year: two anchors sitting right next to each other. Savannah Guthrie and Hoda Kotb last Friday opened NBC’s “Today” show with the Centers for Disease Control’s new guidance that fully vaccinated people can forgo masks and physical distancing in most places, both outside and inside. And so Guthrie and Kotb — who have spent 15 months sitting six feet apart on stools or at “Today’s” large oval desk — linked hands and joked about being able to smell each other’s breath.

That something as mundane as unmasked physical proximity could seem like a monumental visual signpost underscores the toll the pandemic has taken on human interaction. That so many of us still don our masks even as most states have lifted mandates for vaccinated individuals is a sign of deep habituation — and that the ubiquitous pandemic accessory is probably here to stay in (hopefully) limited situations.

“For a while there it was just Hoda in the studio,” said Libby Leist, senior vice president of NBC News and “Today” (Guthrie was co-anchoring from her house in upstate New York). “I remember how great it felt [last summer] when all of the talent was back in the studio. That was our first milestone. This is another milestone.”

For morning shows, where on-air chemistry is critical to success, putting the sofas in storage and separating anchors on high stools at disparate corners of cavernous studios was difficult enough. Attempting to make remote banter seem natural was even more challenging. “We had to decide who was going to talk next and that’s not how we operate,” noted “Fox & Friends” host Ainsley Earhardt, recalling the early days of the pandemic when she and co-hosts Steve Doocy and Brian Kilmeade were working from three separate locations. “We operate in a conversation. It was not ideal.”

On May 6, the “Fox & Friends” anchors — who are all fully vaccinated — returned to their trademark “curvy couch” — though it was extended to 21 feet, six inches (with side tables between the anchors) to accommodate what physical distancing requirements remain in place in New York.

“Now that we’re back on the curvy couch and not sitting on stools, I can interrupt Brian, Steve can interject something, and it’s a true kitchen table conversation,” added Earhardt. “It’s so much easier for our personalities, for the folks at home, to feel like we’re having a conversation.”

“Outnumbered” — which, like “Fox & Friends” ditched its sofa at the outset of the pandemic — also recently returned to a new, extra-long sofa; it’s 23 feet, four inches.

“It’s just better TV,” said Gavin Hadden, Fox News Channel’s vice president of morning programming. “I think we all are accepting of the on-screen boxes or the lawmaker on Zoom crashing. But when we get back down to what we do in a visual medium, it’s important to see people interacting with each other, speaking with each other and not just out of boxes looking straight ahead.”

The rituals of pandemic safety — including vaccines and especially masks — have also been highly politicized. The CDC guidance came two days after contentious hearings on Capitol Hill during which Dr. Anthony Fauci and CDC director Dr. Rochelle Walensky were criticized by Senate Republicans for maintaining stringent guidelines even as more Americans get vaccinated. 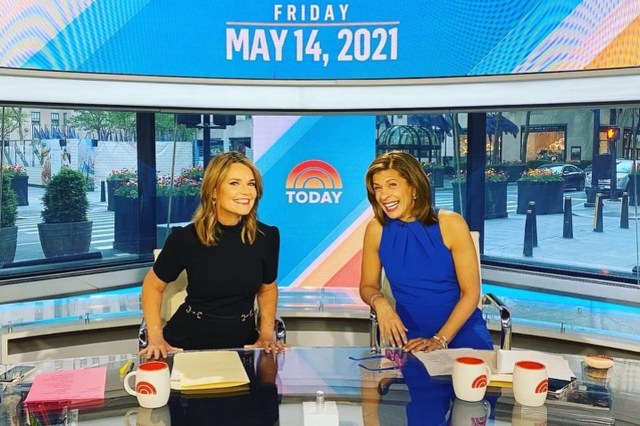 On May 18, New York Gov. Andrew Cuomo officially lifted the state’s mask mandate for fully vaccinated people. Under the new policy, New Yorkers who are not vaccinated or immunocompromised must continue to mask and practice social distancing. Though this is unenforceable for the most part, it is part of an effort to encourage more New Yorkers to get vaccinated. (All of the interviews in this story took place before New York officially adopted the CDC guidance.)

Several “Today” show anchors — including Guthrie, Craig Melvin, Sheinelle Jones and Jenna Bush Hager — got their first dose of the COVID-19 vaccine live on air last April. And Ainsley and her cohosts have discussed their vaccine status on the show. On today’s show, Doocy reiterated the new CDC guidance and encouraged viewers to “get the shot.”

Regular viewers of “Fox & Friends” know that Earhardt has been concerned about her parents in South Carolina, particularly her mother, who is a diabetic and needs dialysis. Earhardt revealed that earlier this year, as vaccines were just coming online, her mother was hospitalized with COVID-19.

“All of us siblings got on a Zoom with her and basically had to tell her goodbye. And we’re all bawling and saying, ‘Mom, you’ve been the best mom.’ It was really scary,” she said. “To have to say goodbye to your mom in one quick conversation while they’re putting her in an ambulance at 2 a.m.…. I’m just grateful that my mom survived. It all worked out. But gosh, it’s been a year. So to actually be back on the sofa, the curvy couch, I’m grateful. I’m grateful to have a little bit of normalcy in my life.”

New York still requires masks and distancing on public transportation, in nursing homes, schools, hospitals and prisons. And businesses have discretion to continue to impose their own guidelines. For now, the morning shows will continue to operate as they have, with pared-down crews, internal testing and tracing, and some distancing protocols.“

“Today’s” Studio 1A — which during a typical pre-pandemic day could have as many as 120 people — early in the pandemic was down to about 20. The control room — a notoriously tight space — is still very limited, with fewer than half a dozen people, including executive producer Tom Mazzarelli, in at any one time. It has also been outfitted with plexiglass dividers; Leist has a remote hook-up into the control room from her Rockefeller Center office across the street from the studio.

Even before the new CDC guidance, morning TV was taking baby steps toward normalcy. At the end of March, “CBS This Morning” welcomed its first in-studio guest — Drew Barrymore, whose daytime show tapes in the same building. And with co-anchor Tony Dokoupil on paternity leave, the show had booked a series of guest hosts, including Barrymore, LeVar Burton, “The Late Show’s” John Batiste, and CBS Sports commentator Nate Burleson, who was on the show last week.

“As we start to emerge from the pandemic we all want more live guests in the studio. It just makes TV more dynamic,” said “CBS This Morning” executive producer Shawna Thomas in an email. “The energy you get from a live in-person conversation is one of the things that makes morning TV great. I’ve only been here for three months, so when I saw Drew and Nate in studio I really loved that energy. We definitely want that all the time, while making sure everyone stays as safe as possible.”

On May 6, pop band OneRepublic played the first concert on the “Today” plaza in 14 months — albeit in front of a small curated audience of New York nurses. It was the band’s first show in more than a year — after the pandemic forced the shut-down of their planned world tour. Leist anticipates more concerts as the summer progresses.

ABC’s “Good Morning America” on May 12 kicked off its “Rise and Shine” franchise, which will have the show’s anchors and correspondents visit all 50 states over the coming months. The inaugural jaunt had Robin Roberts with Dolly Parton at Dollywood, Parton’s amusement park in Pigeon Forge, Tenn.

“That’s a big “GMA”-type of event that wasn’t possible for a long time,” said Chris Brouwer, the show’s interim executive producer along with Simone Swink. “And you’re going to see more of that over the summer. We just have more mobility now. For a long time, we were more constrained about where we could go physically. And that’s changing.”

Swink views the current iteration of “GMA” as “a hybrid.”

“There’s a certain fizz and energy to having in-person contact, having guests in studio as opposed to on Zoom, seeing our anchors go outside in Times Square and interface with all the people hoping for their moment on television,” she said. “Eventually, we’ll be back to the old normal. But I do think viewers will be more willing to put up with the Zooms and the FaceTimes and the occasional dropped shot. Because they’re dealing with that in their everyday work lives as well; the kid, the cat, the dog running in and out of the shot from time to time. It’s fun, it’s normal life. It sort of normalizes it for everyone when you see it happen on breakfast TV.”