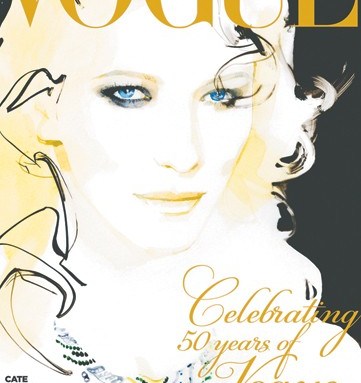 AUSSIE ANNIVERSARY: Cate Blanchett may have only turned 40 in May but she is helping Vogue Australia celebrate its 50th birthday as the illustrated cover star of the magazine’s bumper 360-page commemorative issue.

The guest star of last week’s launch party at Sydney’s Fox Studios, Blanchett in fact appears on not one, but four, covers of the September issue, which hits newsstands on August 5. London-based illustrator David Downton penned all four portraits. Downton and Blanchett have a history together; he sketched the Aussie actress in 2007 for a series of promotional images for “Elizabeth: The Golden Age”.

One of the covers will be offered in a gold box as a limited collector’s edition that retails for 12.95 Australian dollars, or about $11. Also unveiled at the event was a 320-page hardback retrospective book, “In Vogue: Fifty Years of Style,” which will be launched on Sept 1. Published by Harper Collins, the book is co-authored by Vogue Australia editor Kirstie Clements and Australian author Lee Tulloch.

Special features of the September issue include a 10-page spread of swimsuits created especially for the edition by 10 luxury houses, including Chanel, Karl Lagerfeld, Dolce & Gabbana, Christian Dior, Calvin Klein and Gucci and a 28-page editorial shot by Greg Kadel featuring Australian modeling stars Catherine McNeil and Abbey Lee Kershaw. The print run of the September issue is being extended by 30 percent in anticipation of a sellout.

This year Clements celebrates a decade at the helm of the title. Personal highlights of Clements’ tenure include the December 2003 issue, which was guest edited by Karl Lagerfeld. Vogue Australia’s advertising revenue fell eight percent in the 12 months to May 2009, but readership and circulation have remained stable. Conde Nast sold the Australian Vogue license to News Limited in November 2006.

“It’s been an achievement to have been there for 10 years, to have the magazine constantly evolve and to have a great staff that’s happy and involved, I think that’s the best testament,” Clements said. “I have a core team and some of them have been with me for 10 years”. –Patty Huntington