Tom Wolfe, the eclectic author and journalist, who was much more predictable in his sartorial choices, died Monday at 88.

Wolfe, perhaps best known for his 1987 novel “Bonfire of the Vanities” and his earlier long-form reportage like “The Electric Kool-Aid Acid Test” in 1968 and “The Right Stuff” in 1979, as well as his white suit, died late Monday, his agent Lynn Nesbit confirmed. He was a fixture of the New York literary scene and was at the forefront of the mid-century New Journalism movement with his knack for melding literary techniques and chronicling the zeitgeist, from the rise of LSD to Eighties’ excess.

Although prolific and credited with inventing terms like “radical chic” and “The ‘Me’ Decade,” Wolfe in 1979 told WWD that writing for him was slough and even compared it to arthritis.

“It hurts every day,” he said. “These people who talk about the bliss of creation are experiencing something I’ve never felt. The only thing that keeps you going is the imagined applause down the line.”

As for his trademark suit, there was some practicality involved, as Wolfe said he was planning to just wear them out. He tried to switch to yellow at one point, but it didn’t go well. “If I wear it in public, dogs bark and small children leave the street crying.”

That humor was also a trademark. The artist and architect James Wines said, in order to convince Wolfe to present him a National Design Award in 2013, he had to tell the author that Kim Kardashian or Lindsay Lohan would be doing it instead. “Tom got really nervous and said, ‘OK, OK, I’ll do it, I’ll do it,” Wines said then. “‘It takes so long to bring them up to speed.’”

On Tuesday, Wines again recalled Wolfe’s humor, which was in perfect condition about six months ago when they last saw each other for a dinner at Wines’ home.

“He loved to take the alternative position — he would prick you and use his wit to uncover your prejudice or a rigidity of thinking,” Wines said. “That’s the thing I enjoyed most. He would make you think about your own world with an alternative insight.

“If he were working now, today, he might write ‘The Ecstasies of Melania’ or something,” Wines added, laughing at the thought. “He would certainly take a view that would be perverse.”

Gay Talese also remarked on Wolfe’s abilities, noting they were apparent when they were both young reporters in New York in the early Sixties. “My impression of him was first of admiration followed by affection,” Talese said.

The two remained friends through the decades, and earlier this month, they had dinner at Amaranth in New York with their wives and the author Don DeLillo, whom Wolfe had never met.

“Both Tom and Don are very quiet people — they’re not gregarious ever,” Talese said. “Tom Wolfe’s writing is so much in contrast to the quiet demeanor that he is, in person, the personification of.”

Talese went on to describe Wolfe as “courageous,” in his writing and also his person, as he continued to get dressed and go out even as his health started to deteriorate, requiring the use of a tall cane in the last year or two due to what Talese said was a spinal disease.

“Tom Wolfe showed up in his somewhat fallen condition, in his misshapen body, with the same confidence and grace as when he was a young man, dressed in full, to use a phrase from his novel,” Talese said. “He was amazingly confident. He was very sure of who he was and what he wanted to be and what he did.”

Terry McDonnell, who edited Wolfe briefly at Men’s Journal (an excerpt of “A Man in Full,”) said Tuesday, “Thinking about Tom now, I am struck over and over again by his kindness, as well as the brilliant lights he switched on for my entire generation of writers and journalists.”

Jay Fielden, editor in chief of Esquire, which published some of Wolfe’s early work, including the initial version of “The Electric Kool-Aid Acid Test,” even described Wolfe as “sweet.”

Fielden admitted that might be “on odd word to use” to describe someone known as an incisive satirist, but he doesn’t think the two sides are too incongruous.

“He was very thoughtful and sweet, but he loved going after pretension and the silliness and the hierarchy of society,” Fielden added.

Fielden noted that Wolfe was wearing a pocket square of Esquire’s Esky character, a gift Fielden had sent, when they met for lunch last year. And Talese said, even after years of evenings together, Wolfe still sent him artful “thank you” notes that are now framed and hung around his home.

“He was a great figure of elegance and arrogance and perseverance — a wonderful person,” Talese said.

All of those characteristics came through on the occasions that WWD sat down with Wolfe to discuss his work and his observations and even the one area where he admired pretension: fashion.

“There’s still a certain amount of enjoyment to be derived from pretentiousness in dress. It can get a startled look,” Wolfe told WWD in 1981. “Don’t ask me why I want a startled look. I’d have to lie down on the chaise and think about it.”

WWD caught up with Wolfe in April 1979 and August 1981 to talk about “The Right Stuff” and “From Bauhaus to Our House,” respectively. The articles are republished below and offer a glimpse of the man, the character, who decided to dress dapper because the idea of being seen as a bohemian writer seemed “trite.” 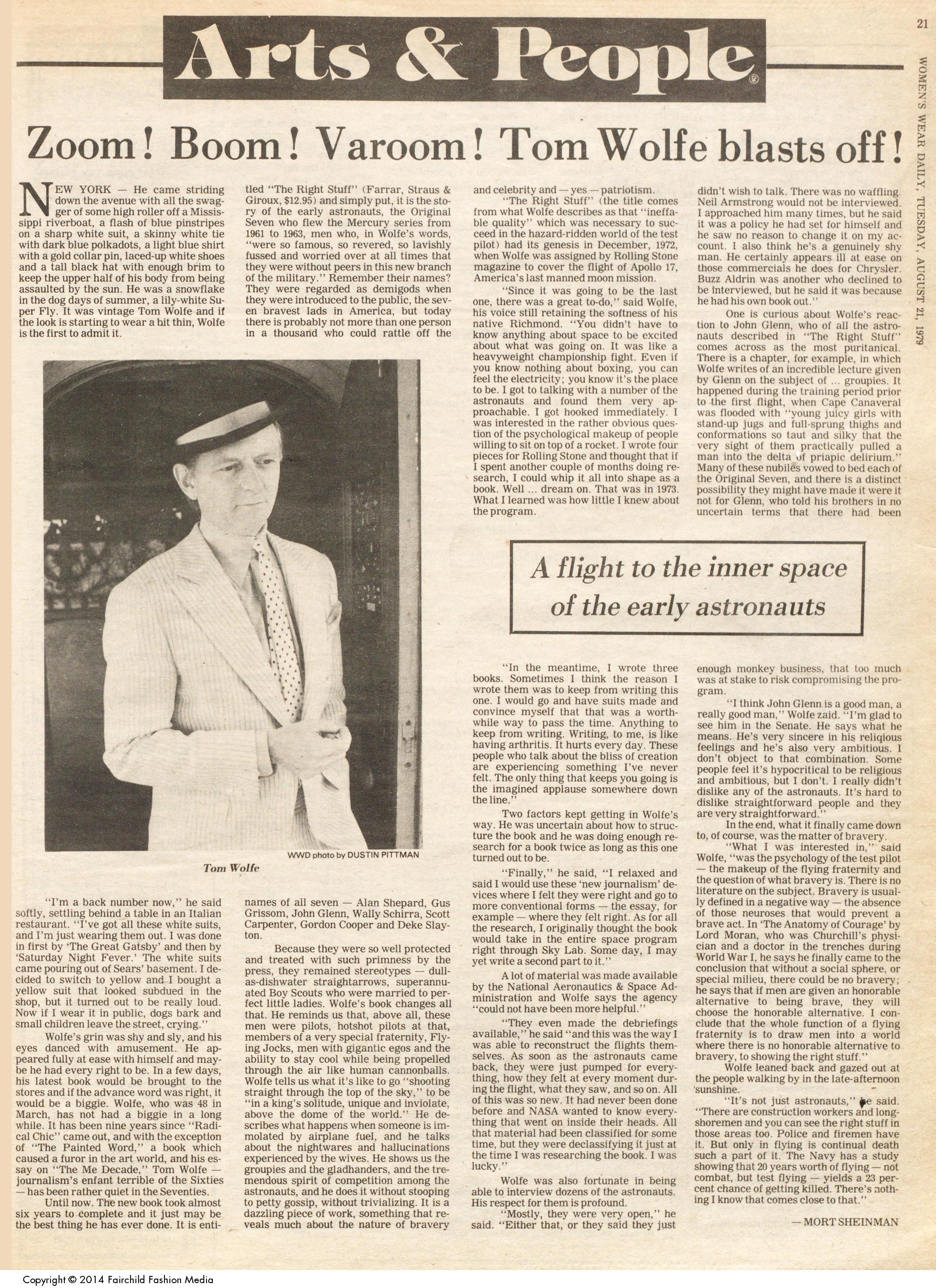 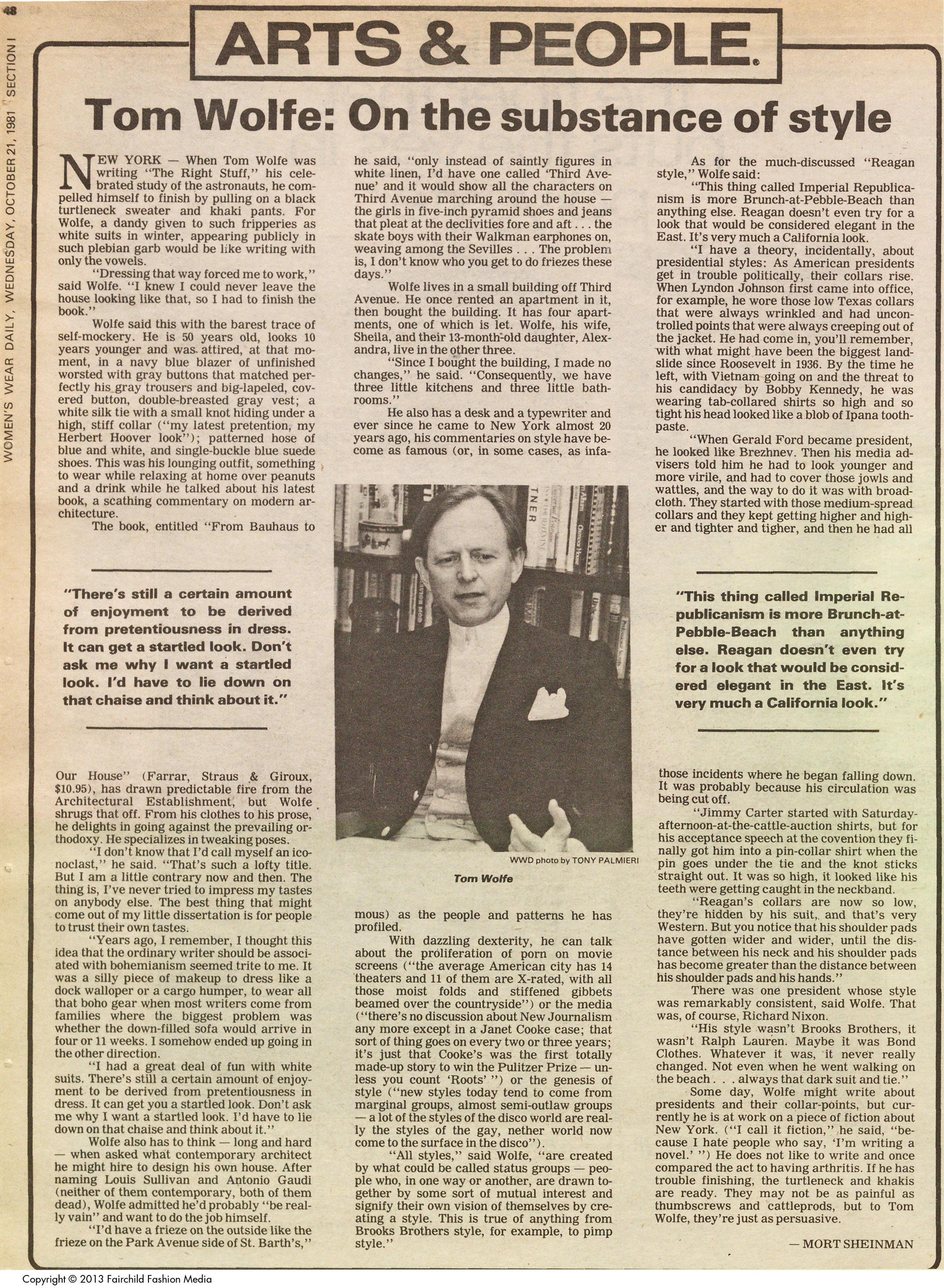