The campaign was photographed in the plush butterscotch-colored backseat of an antique Rolls-Royce Phantom V, from the perspective of an outsider looking in. 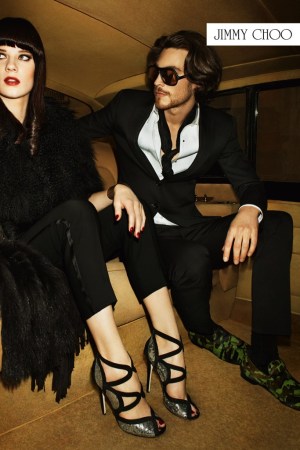 BACKSEAT DRIVERS: Jimmy Choo has slipped into the backseat of an antique Rolls-Royce Phantom V for the brand’s fall ad campaign shot by Terry Richardson and inspired by late Sixties rock ’n’ rollers. The campaign was photographed in the plush butterscotch-colored backseat of the luxury motor, from the perspective of an outsider — or paparazzo — looking in.

The company said the muses for the campaign were the late Sixties incarnations of Mick Jagger and Marianne Faithfull, while Jimmy Choo Creative Directors Sandra Choi and Simon Holloway said their aim was to: “Capture the innocent and glamorous spirit of the late Sixties, the joy of dressing up in eclectic rock ’n’ roll style, of feeling cool and going out.”

The ads, created by AR New York and styled by Camilla Nickerson, will break in the August issues of British and American titles including Vogue and Harper’s Bazaar. The campaign will be rolled out globally in the U.S., the U.K., select European countries, Hong Kong and Japan.