Balenciaga Campaign: Taking It to the Street 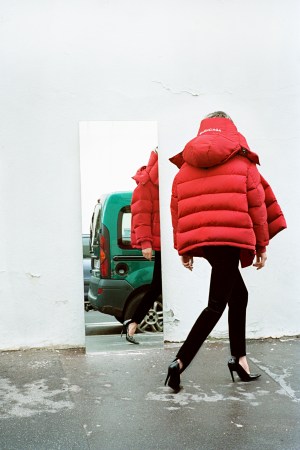 “I wanted the pieces to be shot in a real environment around where we work and live,” he told WWD. “So we shot in various locations on the streets of Paris.”

It marks a break from previous Balenciaga campaigns, which in the past had featured models, such as Gisele Bündchen, in elaborate poses, and celebrities such as Jennifer Connelly.

Instead, the same models who walked in Gvasalia’s debut show this past March are seen on sidewalks: sipping coffee from a paper cup, waiting for a bus or just striding on platform boots, cracked plaster walls or grimy tiles behind them.

Occasionally, a mirror is propped on the street, picking up the reflection of a delivery truck.

“Mark’s ‘real’ approach in his aesthetic was a key factor in my choice of photographer,” Gvasalia explained.

The unvarnished imagery echoes Gvasalia’s approach to the Instagram feed for his Vetements brand, the poses “uncalculated and spontaneous,” according to Balenciaga. Gvasalia said the layouts of the visuals are key to his creative method. Meanwhile, he takes a wardrobe approach to the Balenciaga collection, starting his creative process with a list of garments.

Asked if he would ever enlist famous people for a Balenciaga campaign, he replied: “The new Balenciaga women, the women who wear the clothes, are my celebrities.”

Lotta Volkova did the styling, Gary Hill the hair and Inge Grognard the makeup. The spots are slated to break in newspapers early next month.