Bally Dusts Off Nineties Champion Sneaker for a New Generation

LONDON — Bally has long been thrusting its archive sneaker designs — which date back to the Thirties — under the spotlight at its Milan presentations. This season it’s paying special attention to the Nineties Champion sneaker, which won the brand headlines in France, decades ago, at Roland-Garros.

The high-end brand known for its performance footwear is championing the Champion sneaker with an ad campaign that features three professionals in their twenties, talking about the challenges they’ve faced in their lives and careers, WWD has learned.

There is Ncuti Gatwa, who plays Eric Effiong in Netflix’s “Sex Education,” and model Maeva Giani Marshall, a stroke survivor who would later suffer an allergic reaction to sunlight, leaving her with burns across her face. 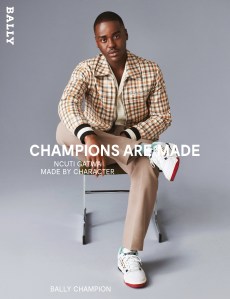 The Champion sneaker launched in the early Nineties and became a favorite among Swiss tennis stars Jakob Hlasek and Marc Rosset, who wore the shoes on their way to winning the Grand Slam Doubles title at the French Open in 1992.

Bally is relaunching the sneaker alongside the “Champions Are Made” campaign, with the three stars talking about the character traits that have defined their careers. The images were shot in a studio by Paul Wetherell.

Bally chief executive officer Frédéric de Narp said in an interview the campaign is meant to channel perseverance, stamina and a desire to win.

“We wanted to tell a story of those who challenge themselves to their fullest potential, and we were inspired by Ncuti, Maeva and Matthew’s stories of dedication, bravery and perseverance. They have become masters at their craft through sheer determination and portray the very essence of how champions are made by the commitments they make.”

He added that Bally chose to highlight that particular sneaker this season because of its “sporting credentials and style aesthetic. It provides the opportunity to tap into and engage a younger, luxury consumer.”

The shoes have been re-created like-for-like to their original form with additional Nineties pop-color combinations. There is also an updated EVA, or ethylene-vinyl acetate, cushioning construction meant to provide shock-absorbing technology for day-to-day wear, according to Bally.

The lining is made from breathable mesh, while the tongue is embossed with Bally’s archive tennis logo. Prices start at 340 pounds.

The sneakers will land Tuesday on Bally.com, at Bally stores and multibrand boutiques worldwide. The brand said it plans to share the campaign across its media channels, and do wild postings in Milan and across neighborhoods in Manhattan and Brooklyn.