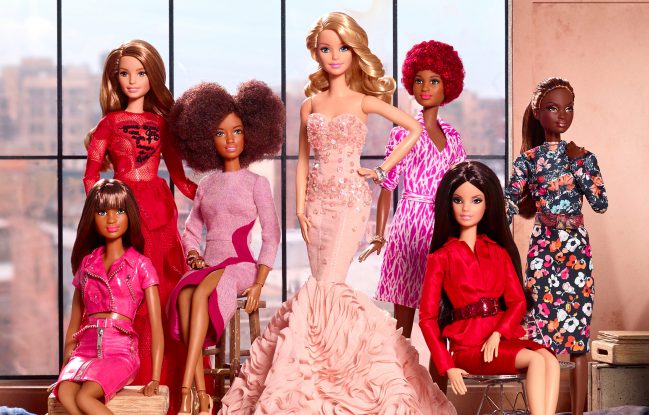 She’s a Barbie girl, in a Barbie world — but now Barbie, the (plastic) doll, is making real (paper) dollars.

At a time when Kendall Jenner’s one billion “likes” are mentioned on the cover of Vogue and so-called “tastemakers” with one million-plus followers are banking $15,000 for a photo, Barbie, perhaps the original style influencer, has become a paid fashion blogger.

Earlier this month, Barbie was paid — literally — to attend a beauty conference at Mane University in Hawaii on behalf of Dyson’s Supersonic hairdryer. As such, she “produced” sponsored content at the event. Mattel declined to reveal how much Barbie received.

Among the images of her lounging on a pink inflatable flamingo and hiking to a waterfall in Hawaii, there is a video of Barbie “blowing out” her blonde hair with a caption: “Our sponsors @dysonhair and @ManeAddicts introduced me to the brand new #DysonSupersonic for the perfect blow out! Sleek and chic with the perfect pop of pink.” So far, the post has 181,000 views.

That is followed by a photo of Barbie at the event with a compact and a coffee that received 41,800 likes: “It’s the ‘mane’ event! About to get the ultimate styling treatment from @ManeUniversity, compliments of our sponsors @dysonhair and @ManeAddicts!”

The account, and Barbie’s first paid posts, are the result of a project that was two years in the making and something that started as a bit of a side project. It was “inspired by the world’s fascination with Barbie” and is currently run by a team of senior designers who create custom outfits, build sets to scale, scout locations, and work with an in-house marketing communications and digital team in addition to publicity firm KCD on the editorial calendar and partner relationships, according to Barbie vice president of marketing communications Kristina Duncan.

“A core group within the Barbie design team saw an opportunity to show a beautiful, curated, behind-the-scenes look inside Barbie’s world,” Duncan said. “Barbie has always been a reflection of culture, and @BarbieStyle showcases her as an icon traveling the world, showing up in culturally relevant places and spaces.”

Barbie’s @barbiestyle account has gained 1.5 million followers and shared images from events such as New York Fashion Week, the Golden Globes, Art Basel Miami Beach and Coachella, with location shoots ranging from Milan to Montauk, Paris to San Francisco. Her posts average 40,000 likes and 500 comments, with a total of more than 40 million total likes so far.

“The response from our fans has been overwhelmingly positive,” Duncan said. “We have a highly engaged following who love the beautiful imagery and real-life situations we create. Most comments consist of our followers tagging their friends saying ‘look, it’s us!’”

It’s also testament to the power of a highly curated Instagram account (although, at 57, Barbie did have a bit of name recognition working in her favor). As followers are primarily women in the 18-to-34 range, the account also offers a bit of nostalgia for those who grew up dressing Barbie who have now gone on to compete for an audience with #OOTD posts. And although its creators won’t say as much, it’s a tongue-in-cheek acknowledgement of what it means to be a paid influencer.

For red carpet events, Barbie applies for credentials as any other attendee. “Barbie generally gets to go to the events on her wish list,” Duncan said, but the harder part is managing her social calendar.

At the Balmain party in Paris, a spotting by Kendall Jenner and her hairstylist Jen Atkin led to later projects and partnerships with Atkin, including the Dyson sponsorship.

Although the Dyson gig was the first of its kind, Barbie has participated in other larger marketing projects. For “Zoolander 2,” dolls were made in the likeness of the movie characters to enact a narrative with Derek Zoolander, with @BarbieStyle acting as L.A. tour guide.

The most popular posts included the announcement of Barbie’s Fashionistas line, which included 30 different looks with various skin tones and body types and a collaboration with Target. Barbie at the Forbes Women’s Summit received more than 50,000 likes, which Duncan said “is strong for our channel and shows our audience likes seeing Barbie as an empowered role model.”

There are other Mattel accounts; @Barbie is targeted toward moms and kids and is treated more as a marketing platform. @BarbieStyle is approached as a first-person account from Barbie, and includes occasional images with her “squad” and boyfriend.

Michelle Chidoni, vice president of global communications at Mattel, said that although “Barbie is a busy girl, she is great at making time for exciting opportunities.”

“I think the team knew they had this huge opportunity to treat her on social media in a different and special way,” she said. “This celebrates Barbie the icon, and plays into the culture in a way that few brands can.”