For the women's campaign, Penelope Tree is joined by seven other novelty models, including Jane Aldridge, Jessica Saund and Julia Sarr-Jamois. 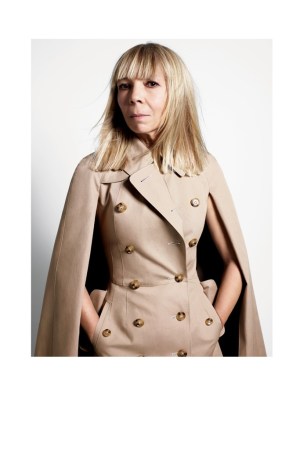 BARNEYS’ UNFORGETTABLE FACE: To hear Dennis Freedman tell the story, Penelope Tree was destined to be the face of the store’s spring campaign — the second on Freedman’s watch as its creative director. Just as he was wondering, for no reason in particular, “Where is Penelope Tree?” she materialized at a party the store was hosting for a Diana Vreeland book. “The hardest part was convincing Penelope to do it,” he said. Tree has been out of the picture, quite literally, essentially since David Bailey and Richard Avedon made her distinctive face the emblem of the Swinging Sixties. Now in her 60s, Tree lives between London and New York and devotes her time to charity work with Lotus Outreach, a nonprofit that works with marginalized women and children in India and Cambodia, from whence she dispatched an e-mail explaining how she prepped for the Barneys shoot with Mario Sorrenti. “I only had 10 days between when the contract was signed and the shoot — too late for a body and face transplant or even a new exercise regime. So I worked on getting some sleep!”

Though Tree is the focal point of the campaign, titled “Tree Time,” she is joined by seven other novelty models, including Jane Aldridge, who writes the blog Sea of Shoes; Jessica Saund, a member of the American Ballet Theatre, and Julia Sarr-Jamois, fashion editor of the British indie magazine Wonderland. They were scouted by Jennifer Venditti, the booker known for her street castings.

It’s worth noting that Freedman chose Carine Roitfeld as the face of his inaugural campaign for Barneys last fall. Like Tree, Roitfeld is well known in fashion but is not a typical model in look or age — she’s 57. When asked if this was a deliberate move to court the core Barneys customer, Freedman said, “It was not a commercial decision. There was never a discussion about the commercial advantages of working with women of all ages. But I think it’s important to recognize women of all ages in our culture.”

Lest Tree get all the attention, Barneys also has a men’s campaign. It was shot by Juergen Teller in New Orleans, where they used Miss Pussycat’s Puppets as the background for much of the shoot, which features traditional male models of the young and pretty sort. Both campaigns drop in March issues of magazines including Vogue and Vanity Fair. The at-home mailer date is Feb. 15.