The actress is the face of the Chanel-owned Scottish cashmere house’s first ready-to-wear collection. 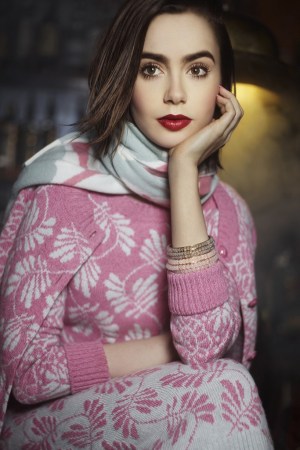 The cashmere manufacturer, based in Hawick, Scotland, is launching the line for fall that consists of 20 silhouettes.

England-born Collins — who got her break as Snow White in “Mirror Mirror” and is starring in romantic comedy “Love, Rosie,” due to be released later this year — appears in the lookbook shots lensed by Karl Lagerfeld.

One that features her sporting a camouflage cardigan with mood lighting will be used as advertising.

The collection will be previewed in Paris at concept store Colette from June 9 to 14, followed by the opening of the first Barrie store on June 15 at 380 Rue Saint-Honoré in Paris.