The magazine is set to debut its first redesign in a decade — and the look is cleaner. 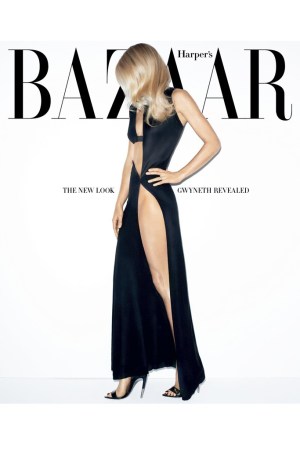 Glenda Bailey clutched the magazine close to her chest, like a Giants running back about to charge the Patriots’ defensive line. It was the first copy of the first redesign of Harper’s Bazaar in a decade, and she was understandably possessive of it.

“Let’s wait a minute,” said Bazaar’s editor in chief, taking a seat in an otherwise empty conference room on the 16th floor of Hearst Tower. “I just returned from the collections. How are you?”

This story first appeared in the February 1, 2012 issue of WWD. Subscribe Today.

The March issue finally lands on the table and it’s the cover that subscribers will receive. It shows a leggy blonde, wearing a skin-baring, long black dress from relatively new designer Anthony Vaccarello. Her long, wavy hair is covering her face. Is that a model?

“It’s Gwyneth Paltrow,” Bailey proclaimed. “It’s a very daring thing to do, where you don’t immediately see her face.” Bailey added, “As you know, I was the first to develop this two-cover approach.”

Here’s how the new Harper’s Bazaar can be summed up: it’s like the party guest who you recognize when she enters the room, but you know she’s had work done — a lot of work.

The magazine is larger by one inch, the paper quality is noticeably thicker and there is new cover typography. Inside the issue, the pages look less cluttered and thrown together, with more white space, while sections are more tightly edited. So far, there’s less celebrity and the related popcorn stories that can come with that. But in some ways, it still feels like the old Harper’s Bazaar. The black logo is the same. The emphasis is still on high fashion.

“It’s going to take a while to get through it,” Bailey said with some pride, paging through all the advertisements in the front of the book. “It’s up 15.5 percent in ad pages, you know. We’re going to be here for a while.”

These are the results of new publisher Carol Smith, who has called March her first issue even though she joined last May. The turnaround in March ad pages is significant. The prior year, ad pages fell 12 percent, to 235. New advertisers include Tom Ford Fashion, Hervé Léger, David Webb, Alberta Ferretti, Alexis Bittar, RéVive, Nexxus and Lucky Brand.

But while the redesign gives Smith and Bailey a new tale to tell, Bazaar still has a lot of ground to make up — it remains the fourth fashion title in terms of ad pages, behind Vogue, InStyle and Elle.

Bailey landed on the first new section, “The List.” Almost every new section starts with the word “the.”

“This is the ultimate list of things to be aware of this month,” Bailey said. Paltrow has also produced a list of her own, “The A List.” Next up, the first of several “exclusives,” in the issue, beginning with a bracelet from Cartier that was originally designed by the brand in the Seventies. Editors at the magazine had been asking about it for years and it’s been reissued. “It really will be the must-have piece,” she said.

A few more tidbits from the issue: Derek Blasberg’s “Best-Dressed List,” an online feature, has become a monthly magazine column. Another story covers 24 hours with Tom Ford. He woke up at 4:30 a.m., took four baths and ate two doughnuts. The beauty section has been expanded, from four pages to 10 in every issue. Bailey has introduced a monthly travel section, “The Escape.” She plans to report on more news every month, to include the latest on art, film, books and trends. And she has kept the monthly feature “Fabulous at Every Age.” Bailey has even expanded upon it, in the beauty section.

Terry Richardson, a longtime contributor, photographed Paltrow for the cover. Karl Lagerfeld, Dan Jackson and Karim Sadli also shot features in the issue. Artist Liu Bolin painted designers including Alber Elbaz and Angela Missoni. “I just saw Alber and he told me there is still paint on his glasses,” Bailey added.

Mark Halperin and John Heilemann wrote a piece about Sarah Palin, pegged to the HBO movie of “Game Change,” based on their book. Lisa DePaulo has a piece about Stephanie Mack, the daughter-in-law of Bernie Madoff, while Vicky Ward wrote about Bernard-Henri Lévy.

When plans for the redesign were revealed in November, many observers were surprised to hear Robin Derrick, former creative director of British Vogue, was hired to consult. He ended up spending about a month on the project, not just working on the magazine but also on all of Bazaar’s social media. Later this year, the magazine will launch e-commerce — the latest move in the ongoing transformation of magazines from merely editorial and advertising vehicles to brands that literally sell the products they cover. “We’ve started to redesign online and we will see that continue,” Bailey added.

She said the new design approach can be summed in one sentence: “It is Didot Caps, Didot Italics and also an introduction of Gotham,” she said, talking typography and taking the magazine back into her hands.

A reporter asked if she could take the issue with her. Bailey replied: “I wish you could but I’m afraid you can’t. These are extremely rare. The team hasn’t even got a copy yet.”

With that, Bailey took hold of the issue and headed to the elevator. The fashion world will have to wait until it hits newsstands on Feb. 14 to see the new look.