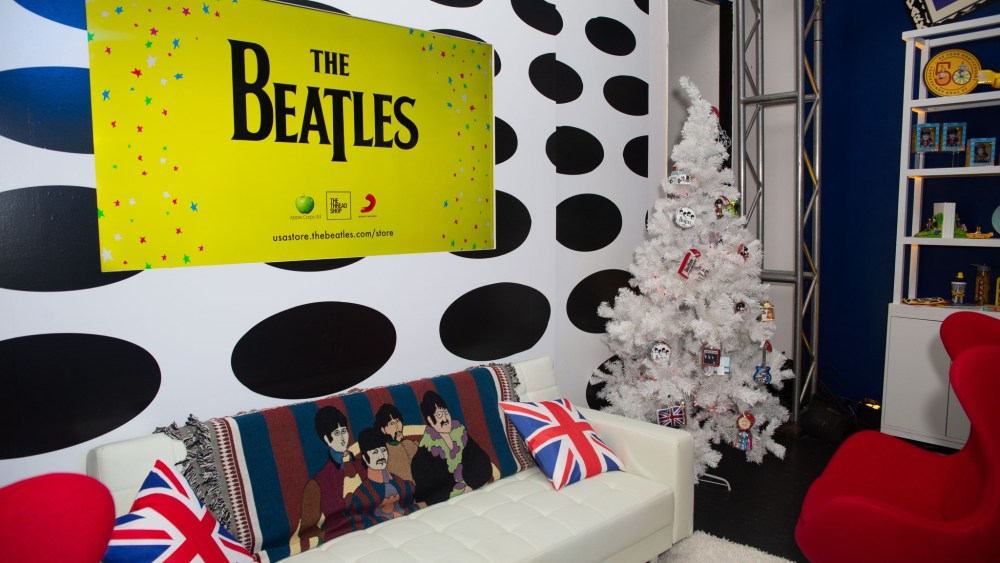 With a DJ spinning Beatles hits throughout the evening, partygoers came out Tuesday night to get the first glimpse of The Beatles pop-up at 163 Mercer Street in New York. It is the first of its kind in the country, opens today and features several interactive elements.

“It’s amazing. They did a great job,” said Paul Cole, merchandising and licensing director of Apple Corps Ltd. “It captures a very good spirit with the colors and it has a great energy. We don’t really do pop-up shops. It’s the first in the U.S.

“The clothing looks fresh. It’s fun and appeals to a good, wide range of fans,” he said, adding, “You don’t need to be a fan to like the merchandise.”

Asked whether the Beatles’ popularity has peaked or does it continue to grow, he said, “They’re as popular as they’ve ever been. We keep gaining new fans and the younger generation. People think the demographics skew quite old, but they have very young fans. The Beatles are for everybody.”

The shop will stay open until Dec. 22 and is a joint venture between Sony Music’s The Thread Shop and Apple Corps Ltd., and features the first wave of products available under a new licensing agreement for The Beatles merchandising rights in North America. Products range from Beatles holiday sweaters, hats and scarves to tree ornaments, albums, coffee mugs, books, totes, socks, turntables and even a Beatles pinball machine.

In fact, as the Beatles pinball machine was being hauled off the truck and into the shop on Tuesday, it already had a buyer. Realtor Dan Melwani, founder of Rawspace Group, who leased the pop-up to Sony/Apple Corps. paid $7,999 to buy the pinball machine, which will stay at the store for the duration so visitors can play it.  Melwani said he eventually plans to house it in his office.

Richard Story, president of Sony’s Commercial Music Group, said about the pop-up: “It came out fantastically. As a Brit, I really like seeing the red London phone booth, having been in the U.S. for 10 years. Getting this relationship is a real calling card and will help us attract more deals. It’s an important part of what we can offer our artists.”

Howard Lau, head of The Thread Shop, said they have a lot of licensees and most of the categories, such as home, apparel, toys and kitchen, are covered. One area they are exploring is higher-end apparel. “A brand like this can be elevated,” he said.

Album decor vignettes, an arcade area, a Beatles drum kit, a gift wrap station called Help!, Beatles videos and the authentic phone booth are some of the shop’s features.

Kristine Summer, a collector who flew in from Lexington, Ky., was taking it all in. She’s been a Beatles collector since 2011 and is one part of a documentary series that Sony is doing featuring collectors around the world. The first one airs on the Beatles Channel Wednesday.

Summer said she collects mostly records, toys, books and magazines about The Beatles. When asked why, she said she loves their music and their personalities. She said she came to Sony’s attention through her YouTube videos, where she has 6,000 followers. Overall, Summer said she has about 50 of their albums. Her favorite? “Rubber Soul.”

As the night wore on, guests came to the realization that Sir Paul McCartney, who’s currently in New York and was rumored to be attending the party, wasn’t showing up. Mick Rock, the photographer and evening’s DJ, had hinted earlier in the evening that he didn’t think McCartney would be coming. “He’s wanted all over the world, 24 hours a day,” he said.

Beatles Fans Invited to Come Together at SoHo Pop-up

Fifty Years On: Inside The Beatles Sgt. Pepper’s Album Cover