In the spring issue of Love, Giles Deacon talks to Victoria Beckham about designing clothes and marriage. 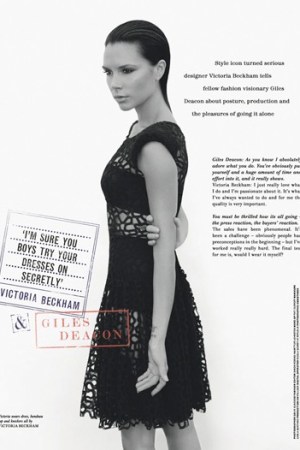 LOVE-IN: In the spring issue of Love, which lands at newsstands on Monday, Giles Deacon lays down his needle and thread and picks up his pen to interview Victoria Beckham. Deacon goes easy on his pal, with a generous dusting of compliments, which are returned in kind. Beckham admits men’s wear is not in her sights. “I think Tom Ford is doing an incredible job…but it’s not like I can’t wait to do a men’s line. I love women. I’m a real girl’s girl,” she said, adding she had an “out-of-body experience” when she finally screwed up the courage to read the reviews of her collection.

Grateful for her face time with Deacon, Beckham says: “I’m just happy to have someone who wants to talk to me [about this]. Normally, David’s like, ‘Stop it, I don’t want to talk about clothes anymore! I want to talk about motorbikes and tattoos,” she laments.

It’s no wonder David regularly runs for the hills, because Mrs. Beckham has some clear ideas — à la Monty Python — about men and dresses.

“Do you not try your dresses on, then?” she asks Deacon, after telling him how important it is for her to test-drive her own collection. “I don’t know how men do it. I’m sure you must do it secretly.”

HITTING THE DELETE KEY: Giancarlo Giammetti had a taste of just how powerful the Internet and social networking are when his remarks on the latest Valentino couture show sparked extensive response from his Facebook friends. Referring to the collection designed by Maria Grazia Chiuri and Pier Paolo Piccioli and presented in Paris last month, Valentino Garavani’s longtime business partner said on his personal page that he was “just speechless.” Giammetti said he was “not sad…just surprised.…We have always supported the new designers and we love them, but this time we have to distance ourselves from this ridiculous circus.” The comments were subsequently deleted. On Wednesday, Giammetti told WWD his observations “provoked such a mass of comments from friends on Facebook” that he was prompted to “decide to delete [the quotes] because it was becoming [too] heavy.” Giammetti concluded both he and Garavani “are always supportive of the designers of Valentino, even if we don’t approve of their effort to be cool at all costs. But we will always be [supportive] of them.” The house of Valentino declined to comment.

APP-PROPOS: Vanity Fair is bringing the race for the Oscar to its first app. Beginning today, the Vanity Fair Hollywood app will let users invite friends to make their Oscar picks and compare their selections with each other as well as editors at the magazine. On awards night, those who have voted will be able to follow the winners in their group or voting pool as the envelopes are opened. “I’ve used a pencil and paper for the last 35 years, and I’ve never gotten anything right — not anymore,” said editor Graydon Carter.

The app also will offer exclusive coverage of Vanity Fair’s Oscar-night party, as well as content from the magazine, with background on the nominees, film trailers and slideshows. L’Oréal Paris is sponsoring the app, and the company will provide special offers and incentives through the gift bag feature.

STILL TOUGH AT TIME: As part of Time Warner’s earnings news on Wednesday, Time Inc. reported revenue declines of 13 percent to $1.10 billion during the fourth quarter and advertising revenue down 12 percent, which represented an improvement over the prior year. The style and entertainment unit emerged as the strongest performer during the period, thanks to revenue growth from People magazine. Most of the ad declines were concentrated in the news segment, which includes Time magazine. The division showed improvement in subscription trends, primarily at the newsstand. For the first quarter of this year, Time Inc. has seen improvement in print advertising, relative to the fourth quarter.

SLEEP DEPRIVED: Note to designers: If you see Nina Garcia yawning in the front row of your spring show, not to worry. It’s not fashion ennui. She’s just sleep deprived. Indeed, the Marie Claire fashion director and “Project Runway” judge told WWD she has been burning the midnight oil in the name of her forthcoming style guide, “Nina Garcia’s Look Book: What to Wear for Every Occasion,” to be released by Hyperion’s women’s-interest imprint, Voice, in August.

“I get more inspired at night,” Garcia said, “when everybody’s in bed, when there are no phones ringing, when I have sole access to my computer and I don’t have to fight with any other member of my family over it.” With “Look Book,” the fourth book Garcia has authored in the last three years, the editor-slash-TV personality intends to address “those very specific wardrobe questions” she’s been asked by women while on the road promoting her previous books or “Runway”: “What to wear to a bar mitzvah, what to wear on a first date, what to wear on a job interview,” she explained. “It just goes on and on. I mean, I hope I’ve covered every single situation.” Garcia estimated the book will include 80 suggested looks, with illustrations by Ruben Toledo. With regard to her schedule, Garcia said her love of fashion motivates her to “find the time” to write her books, though doing so comes at a price. “I do sleep very little,” she said. “So, if you see me around with a lot of bags under my eyes, that’s why.”