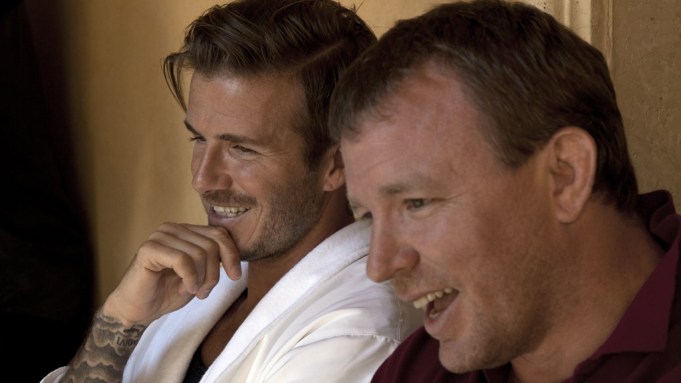 BECKHAM, RITCHIE TEAM FOR H&M: David Beckham is back in action for H&M, this time in a 90-second commercial directed by Guy Ritchie to promote the spring collection of David Beckham Bodywear for H&M.

The spot, launching online today as well as in a 30-second version for television and movie theaters, was conceived by Marc Atlan, whose Venice, Calif.-based Marc Atlan Design Inc. put together the three previous Beckham campaigns, beginning with spring 2012. The idea began when French-born Atlan, whose clients include Christian Dior, Helmut Lang, Tom Ford, Yves Saint Laurent, Prada Beauty and Cartier, was en route to a meeting with H&M in 2011 about a different campaign. “I was reading an article about David on the plane, and I brought up working with him after our meeting. What I didn’t realize was that H&M had then contacted his agent, Simon Fuller, and put a deal together,” said Atlan. “They told me a couple of months later that I’d be the creative director for the two-year campaign. It has been the biggest thing I’ve ever undertaken.”

Along with the H&M and Beckham teams, Atlan designed everything from the ad materials to the hangtags, packaging, shopping bags and buttons on the garments. He also floated the idea for Ritchie to helm a 30-second spot, knowing the director only takes one commercial job a year. “David makes the perfect leading man,” said Ritchie, who ended up tripling the length of the spot. “For me this felt more than a campaign; it was like directing a short film.”

Beckham is shown wearing a bathrobe in his driveway, seeing his sons off to school. The robe gets caught in the wheel of the Range Rover, leaving him — surprise — in his underwear and slippers, and he’s forced to chase it down through his Beverly Hills neighborhood. Combining Ritchie’s flair for action with tongue-in-cheek humor, the spot allows Beckham’s non-self-serious personality to shine through. “Working with Guy has been a fantastic experience. I hope everyone has as much fun watching the film as I had making it,” said Beckham.