Behind the Scenes With Royal Reporters

We’ve all seen the news, but what’s it actually like to report on Britain’s royal family?

In 2015, during a royal tour of New Zealand, Prince Harry dipped his hand in bright purple paint in order to leave his imprint on the wall of a South Auckland youth center, but instead ran up to The Sun’s veteran royal photographer Arthur Edwards, who was covering the event, and plopped his palm right on top of his head.

It was a typical playful move of the prince back then and even shared by Kensington Palace’s official Twitter, with the caption “Prince Harry plonks a purple handprint on @arthurjedwards’s head.”

While Prince Harry has understandably long been wary of the British press in the years following his mother Princess Diana’s death and no doubt the publication of the naked Vegas picture, he was known to often have a friendly rapport with reporters and photographers during tours and events, especially when it came to promoting his charities. That even included at times making cups of tea for them during tours and taking them to the pub at the end, sometimes picking up the tab, according to Edwards.

Katie Nicholl, Vanity Fair’s royal editor, also recalled a time when she was at the Mail on Sunday newspaper and Harry appealed directly to her to write about the charity work he was doing with Walking With the Wounded. “He said, ‘Look can you do something on this? It’s a great cause and I want people to know about it,’ and we did,” she told WWD in mid-December. “We published in the Mail on Sunday a big double-page spread on this Walk of Britain and that was an example of us being able to work with them.”

Those days now seem far away, with Duchess Meghan suing the Mail on Sunday over publishing her private letter to her father and the duo subsequently dropping the bombshell that they no longer wanted to be senior members of the royal family. Prince Harry placed some of the blame on the “powerful” tabloid media that he believes have often been “ruthless” in its coverage of his wife.

But even in the months preceding these two events, it had become apparent that their relationship with much of the British press had become strained. “Everyone was in love with Harry, but since he got married he’s become very withdrawn. He doesn’t even say good morning to you any more or he doesn’t even acknowledge you,” said Edwards, speaking just weeks before that infamous Instagram post on Jan. 8.

“I don’t know if it’s the influence of Meghan [Markle] or if he feels like Meghan has had a very unfair press and he’s trying to protect her. Maybe that’s the reason, but I’m not sure actually,” added Edwards, who has always thought a lot of Prince Harry and had hoped at the time that he would return from his vacation with a more positive outlook.

Jonny Dymond, the royal correspondent at BBC News, who spoke to WWD in December said, “Harry for a long time has just hated the media and that’s broadcasters, cameramen, the newspaper reporters.” “He just can’t bear the lot of us and he doesn’t see the relationship between the media and him as an important one. He just wishes we would all go away.”

A number of reporters and photographers were particularly disappointed that they were left in the dark over when Duchess Meghan gave birth to baby Archie and there was no photograph outside the hospital, something of a royal tradition. As Edwards, who has been photographing the royals for the British tabloid since 1977, put it, “The baby was almost teething before we knew he was born.” 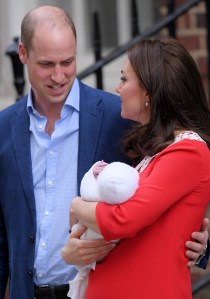 The Cambridges with newborn Prince Louis in 2018.  David Fisher/Shutterstock

Instead, the Sussexes in many cases bypassed the press altogether over the past year, using social media to get their message across, choosing Instagram as the medium through which they told the world — and reportedly some of the Windsors — that they were done with their senior royal statuses. That strategy of eschewing traditional routes was made official with the fine print on the couple’s new web site explaining that they would stop participating in the so-called royal rota system. This mechanism has historically allowed group of select media outlets, including The Sun, The Telegraph, The Times and The Daily Express, to attend royal events on the understanding that they freely share the news and photographs with other members of the press.

While that relationship is currently a difficult one, other members of the royal family — particularly the Prince of Wales and the Duchess of Cornwall and the Duke and Duchess of Cambridge — appear to see some importance of having a relationship with the traditional press, especially when it comes to promoting the work that they are carrying out.

On their way to a recent tour of Pakistan, for example, the Cambridges made a point of walking to the back of the plane to chat to the accompanying members of the press, telling them that they were all very welcome on the trip, according to Edwards. Camilla is also widely viewed as a favorite of the press, with Edwards describing her as “helpful.” “She knows what job you’ve got to do.”

Dymond added that “the rest of the royal family are slightly different and still understands that there is an important relationship to have, albeit as far as they’re concerned at arms-length.”

Still, while they appear to want to have some sort of a relationship with the press, Michelle Tauber, one of People magazine’s senior editors, based in the U.S., noted that the palace is now a much more closed institution than it was during the Eighties and Nineties when there was “an astonishing level of access that existed through the Diana years.” She would often tip the press off and even did a sit-down interview with the BBC (“there were three of us in this marriage”), although that relationship wasn’t always on her terms and she was hounded by the paparazzi to a devastating end.

It’s also since come to light that there were various tabloid newspapers that were hacking the phones of members of the royal family and that’s where a lot of the salacious stories would come from.

Nowadays, while Prince Andrew did do what most believe to have been a disastrous sit-down interview with the BBC, those opportunities are much rarer and securing sources close to the palace — and with them exclusive stories — is no easy feat against a backdrop of much tighter ranks around the royals. For Nicholls, especially with the young royals, it took “many, many years” to get people to trust her. That was very different in her previous role as a showbiz reporter, where celebrities are often surrounded by big entourages and hangers-on, who are in many cases willing to talk.

“The relationship between the press and the royal family has been a fragile one and at points it’s been quite a difficult one, so any royal reporter will say that one of the hardest things is getting the good contacts of people to help you and stand stories up,” she said.

In the case of Dymond, who was a foreign correspondent for 15 years, it’s a completely different world. “I think the biggest difference is that you never get to speak to what we call the principles — members of the royal family — I mean certainly not on the record. You might get to chat to them in the wings strictly off the record, bit of chat, bit of insight, but you never really get to speak to them for broadcast.”

See Also: Why Prince Harry and Meghan Markle Are Stepping Away From Their Royal Duties

And when they do get these stories it’s always a balancing act. There will be many times when the stories are about their personal lives and not the causes they are trying to promote — and the royal family member in question won’t be happy about it. The reporter will then have to make a case-by-case judgment and according to Nicholl, most established royal journalists and photographers are constantly treading a line throughout their careers.

“Stories that touch on their private lives that they consider intrusive or not relevant to their public lives those are always the stories that tend to antagonize, but of course those are also the stories that are of interest to readers. It can’t be all about their charities and their public roles and their work. It has to be the bigger picture,” she explained, although there have been times when she’s decided not to publish.

“As a journalist you’re there to report the facts. You’re there to cover the story. But I think there are occasions where I’ve chosen not to report on certain stories to either protect a contact or there have been times when I’ve done it to protect the member of the royal family it concerns. It’s always a bit of a balancing act I suppose.”

A Timeline of Harry and Meghan: From the Royal Wedding to Megxit