For the first time, the brand will use renowned models for its product campaign. 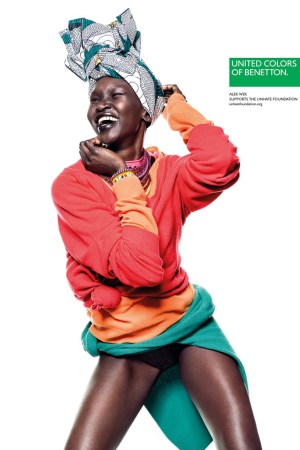 MODEL MOMENT: After having built up a reputation for provocative institutional advertising (like its recent ad featuring the Pope kissing an Egyptian imam), Benetton’s spring product campaign may seem surprisingly tame, featuring famous models in a series of nine photographs and video testimonials.

It marks a shift in ad strategy, since it’s the first time the brand has showcased celebrities. Each one was chosen for the story he or she has to tell, Benetton brand executives said. Alek Wek, for instance, was selected as one of the first African models and for her humanitarian work, and Elettra Wiedemann, for her environmental commitment. There is also Brazilian transsexual Lea T and German model Mario Galla, who has only one leg.

“This is an innovation for us, because we have never used testimonials,” Benetton Group chairman Alessandro Benetton said of the videos. “Now, we are using testimonials that are visible and recognizable to the world of fashion. That is the provocation.”

“Each one of the people we used is unique in their own right, and it’s the community of the nine of them together that makes the campaign strong, because none of them should really be a model in standard fashion language,” said Benetton chief merchandising officer and creative director You Nguyen.

Because they appear in what is first and foremost a product campaign, the brand (whose full name is United Colors of Benetton) is also putting the focus back on color, which was an essential element of its success during its heyday in the Eighties and early Nineties.

“It’s number one about color, but we have approached color in so many different ways,” Nguyen commented, adding that was both through the models used (Charlotte Free with her pink hair is one example) and the label’s monochromatic basics sported by them.

Benetton is hoping the campaign will make consumers take a new look at the brand. “Our two latest [institutional] campaigns, the Unhate campaigns, talked almost to 500 million people. They were very well accepted,” Benetton commented.

The brand does 60 percent of its business in Italy and Spain, where sales declined a few percentage points, although finalized 2012 figures were not yet available.

“Of course we are not doing well there; it’s no big secret,” he said. “There is nothing we can do about it.”

Meanwhile, revenues in the rest of Europe were flat, continued Benetton.

In the U.S., meanwhile, the brand is renovating its retail network, with outlets in Washington, Chicago and Miami Beach already completed and the New York Fifth Avenue store undergoing a revamp this year.

“I think that we need to take two or three steps backwards and reestablish a real contact with the final consumer, being able to tell him [or] her what Benetton is about,” Benetton commented about the U.S. activity.