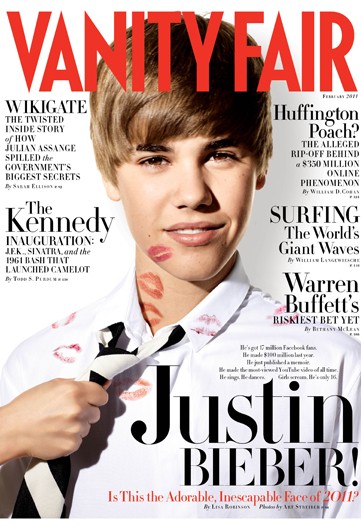 Vanity Fair’s February Bieber cover is on track to become the worst-selling issue for the Condé Nast monthly in 12 years and one of the top three worst sellers for the magazine since Graydon Carter took over as editor in chief in 1992.

The Bieber cover has sold 246,000 copies, according to the Audit Bureau of Circulations’ Rapid Report. The ABC Rapid Report data is submitted directly by publishers but has yet to be audited by ABC, so the figure could be slightly adjusted.

But if the number holds true, the Bieber cover will be Vanity Fair’s biggest bomb since Will Smith graced a July 1999 cover while atop a black stallion to advertise the movie “Wild, Wild West.” The Smith cover sold 202,701 copies at the newsstand, according to ABC data. The only other cover that has sold below the 246,000 threshold during Carter’s reign was the July 1993 one featuring Harrison Ford, which sold 243,000 copies.

The February cover featured Bieber smothered in kisses in an issue that also included stories on Julian Assange, The Huffington Post and Warren Buffett. Through May, Vanity Fair is down about 5 percent at the newsstand, averaging 342,000 sales an issue, according to ABC’s Rapid Report.

And it’s not just the monthlies, either. In April 2010, People featured a Bieber cover — “ALL ABOUT JUSTIN BIEBER” shouted the headline — that sold 961,762 copies, which represents a 25 percent dip below average sales and was the third worst seller for the weekly all of last year, according to ABC data.

Bieber also appeared on the cover of Rolling Stone and US Weekly earlier this year, but Wenner Media has yet to submit 2011 newsstand results to ABC.

So what’s up with the apparent Bieber cover bust?

HEADING TO A NEW PORT: Daniel Day-Lewis, Johnny Depp, David Remnick: One of these is not like the others, but they are the first three cover subjects of Port, a new independent men’s style quarterly — “The Intelligent Magazine for Men” — out of East London. The second issue, on newsstands now with Remnick on the cover, is also the magazine’s introduction to the American and international market outside of England. It’s also “the first time an editor of this stature has agreed to grace another magazine’s cover,” wrote Dan Crowe, Port editor, co-founder and co-publisher, in his letter to readers.

Remnick, shot by Brigitte Lacombe in The New Yorker’s offices at 4 Times Square, looks heroically serious in his close-up. One spread photograph shows him gazing out of the frame in soft focus; another shows him hunched over papers at his desk on the 20th floor, brow furrowed. Nicholson Baker’s profile doesn’t rewrite the book on Remnick by any stretch. The lead paragraph, boiled down: “David Remnick is 52. He’s got all his hair, which is black.…He’s smart…he works too hard.…He’s the fifth editor of The New Yorker, which may be the best magazine ever published.”

Remnick talks about his childhood in New Jersey: “We didn’t eat in the dining room.” There are details about what’s in his office: a framed cover of the Washington Post on Aug. 24, 1991, with two of his bylines from Russia; a “well-thumbed” book of Walt Whitman poetry, and about a dozen ASME award statues lined up along his window sill like a spider army and tangled on the floor below like dirty socks. Much like The New York Times profile of Remnick last April, there’s a quote from his deputy editor, Pam Mafei McCarthy, about how the editor is also a great “floorwalker.” “I don’t mean to sound hagiographic,” McCarthy adds later,” but he really is quite amazing.” Remnick says he feels like a “pretender.”

Port launched this spring on a shoestring with five full-time staff and a large network of part-time help (there are more than a hundred names on the masthead). “We started it because we saw how magazines in general and men’s magazines became less and less interesting over the years,” Crowe said. “Our favorite magazines, like Esquire from the mid- to late Sixties, had really beautiful photography but also long-form journalism, political pieces, photo essays. Magazines just stopped doing that a few years ago.”

The magazine is trying to bring back the art of old-school magazine making, relying on lots of favors and contributions from famous celebrity friends and established peers. Crowe said Baker was paid “a three-figure sum” for the Remnick profile, when he would usually get four. The next piece in the issue is a sprawling dispatch from Colombia by Martin Amis about gang-related youth violence. “It never became clear to me what, if anything, the muchachos were trying to hit,” Amis writes. Daniel Day-Lewis was on the cover of the first issue and also wrote the cover story about a trip to Gaza with a humanitarian aid organization.

The first issue featured front of book items from Paris Review editor Lorin Stein, who wrote about his favorite place to buy suits on Greenwich Street, and from Condé Nast iPad executive Scott Dadich, who wrote about his favorite park in San Francisco. The first issue sold out its 65,000-copy press run in the U.K. at a cover price of 6 pounds; the second issue, selling for $14.99 in America, is on pace to also sell out. Crowe added that the third issue, buttressed by advertising from Italian companies, will turn a profit.

Note: A spokeswoman from the Wall Street Journal wrote in response to Crowe’s assertion that Remnick’s appearance on the summer issue of Port was “the first time an editor of this stature has agreed to grace another magazine’s cover” with a reminder: Vogue editor in chief Anna Wintour was on the cover of WSJ. Magazine, the Journal’s glossy insert, for the story “The Business of Being Anna” in April of this year.