He’s the headliner for the magazine's “music issue,” which also features other teen favorites, the boy band One Direction among them. 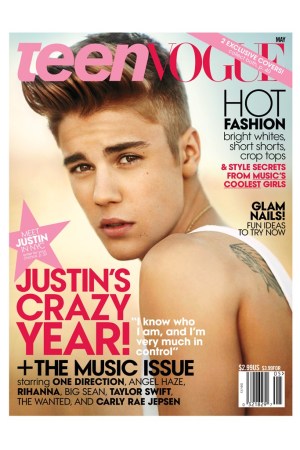 BIEBER’S COVER: In December, Teen Vogue had its biggest seller of the year with a cover story on the boy band One Direction. Teen girls apparently like reading about their heartthrobs. And so for May, it’s slapped another heartbreaker on the cover: Justin Bieber. He’s the headliner for its “music issue,” which also features other teen favorites, 1D among them. It’s the second time the singer has appeared on the magazine’s main real estate — sporting his famous bangs, he graced the cover in October 2010, right as he’d entered global superstardom. In the time since, his star has dimmed, somewhat, and like another young pop star, Taylor Swift, his pull on the newsstand is soft. In 2011, he was Vanity Fair’s worst seller and sold five percent below average for Rolling Stone. Last year, he was Rolling Stone’s worst seller in the second half, according to the Alliance of Audited Media. But Bieber’s been making headlines lately for his erratic behavior in public, and Teen Vogue is playing up the news hook. “Justin’s Crazy Year,” reads the cover line. Betting it’s just the kind of story their readers will gobble up, the magazine is also releasing two covers to newsstands. Asked inside about the rumors swirling around him, Bieber says, “I don’t need to address every speculation. Remember when Cam’ron dissed Jay-Z? Jay-Z didn’t even respond. Why didn’t he respond, because he’s Jay-Z.” The Biebs has spoken.