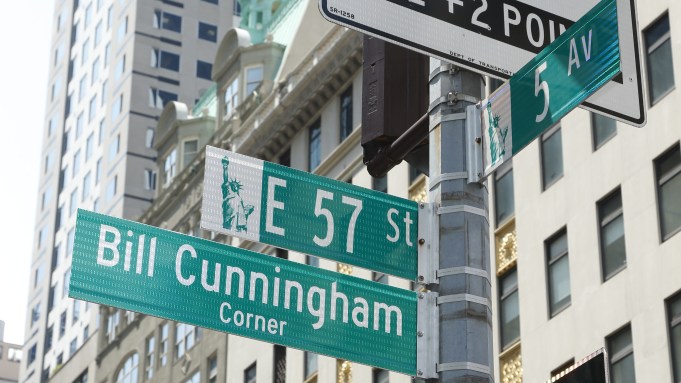 NEW YORK — The northeast corner of Fifth Avenue and 57th Street where Bill Cunningham parked himself nearly every day to photograph passersby has been temporarily named in his honor.

A week after more than 6,100 friends and fans signed a Change.org petition asking Mayor Bill de Blasio to honor the photographer on the city’s streets, First Lady Chirlane McCray helped unveil the commemorative street sign Wednesday afternoon. About 100 people, many of whom stopped to see what the commotion was all about, caught the short-and-sweet tribute.

Its brevity extends to the actual honor, which will only be in place for one week due to city restrictions regarding street namings. But Harold Koda, Sharon Coplan Hurowitz, Nick Nicholson, Jeffrey Banks and other friends of the late photographer said a more permanent appeal is already underway. Cunningham, who started his man-on-the-street shooting at Women’s Wear Daily before moving to The New York Times where he spent the bulk of his career, died June 25 at the age of 87.

Cunningham’s assistant John Kurdewan was also on hand, as were Times-ers Michele McNally and Carol Dietz.

Plans for a memorial for Cunningham are still being ironed out, perhaps for the end of the summer.

McCray said, “Bill Cunningham saw the style and beauty of all of our city’s citizens, capturing the fashion models and bankers and grandmothers and college students with his vivid photos. Bill showed the world one of New York City’s most defining characteristics — style. And he showed us that style isn’t about fancy labels or the latest trends, but it’s about authenticity. It’s about confidence and expression. Generations of New Yorkers found inspiration in the way that Bill democratized the concept of beauty and style.”

What will become of Cunningham’s work is still being discussed, but it will be preserved, according to Kurdewan. “It’s kind of hard to replace someone like him that quickly. That’s 50 to 60 years of a man, who knew fashion better than anyone,” he said.

The New York Historical Society is featuring “Bill Cunningham: Facades” on its first-floor digital columns and online. The Upper West Side museum was gifted the collection, which was shot in the Sixties and juxtaposed the city’s architectural treasures and fashion heritage, after it was displayed there in 2014.

Easy to spot in his signature blue French workman’s jacket, Cunningham’s influence on fashion may also soon be seen on the runway. Leatrice Eiseman, executive director of the Pantone Color Institute, said, “I think Bill Cunningham’s blue jacket will be uppermost in the minds of many, especially designers. I think the color will definitely play into upcoming fashion. It’s also the kind of color that has had much popularity that it won’t be a hard sell.”