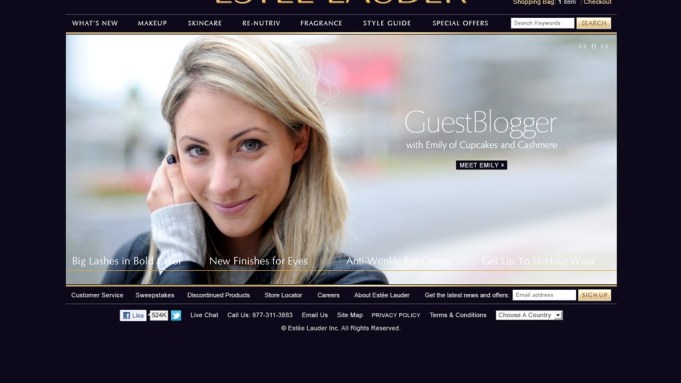 The 28-year-old creator of the popular Cupcakes and Cashmere blog has signed on to be Estée Lauder’s social media and digital guest editor starting Monday. In the new role, Schuman will provide posts for esteelauder.com in a section of the Web site dedicated to her and be featured on Facebook, Twitter and YouTube in ways meant to stay true to the very personal formula that’s her signature at Cupcakes and Cashmere. Possible topics include Schuman’s favorite products and her upcoming April wedding.

“I love beauty. For anyone who has never looked at my blog, I do a lot of how-tos. I am constantly wearing red and pink and orange lipsticks and will experiment with any nail polish,” said Schuman. “They are some of the most well-received posts that I do, so I feel like it was just a very natural fit to work with a brand that I love.”

Estée Lauder executives and Schuman spoke a lot about fit — they used the word more than a dozen times, in fact — during a recent interview on their partnership at Schuman’s Los Angeles home, and it made sense. Schuman started her blog in 2008 to explore her love of food (hence, cupcakes) and clothes (hence, cashmere). She began concentrating on it full time two years later after taking a voluntary buyout from her AOL sales associate job. It reflected her life of sumptuous baked goods, game nights with friends, trips to farmers’ markets, well-composed outfits and, of course, enough cosmetics to flood drawers.

“I love to think of her in some ways as our ideal customer,” said Jane Hertzmark Hudis, global brand president of Estée Lauder. “She is an entrepreneur. She is authentic about what she likes and what she doesn’t. I love that,” Hertzmark Hudis noted, adding, “She’s got an infectious personality that comes across…in her writing and her take on things. I felt that she was the right person for us.”

Not known for pushing the boundaries in the digital realm like Avon’s Mark or Lancôme, signing on Schuman brings Estée Lauder into the conversation about the integration of editorial content and commerce. Ultimately, sales may judge the success of this endeavour, but Hertzmark Hudis is interested in a less tangible outcome. “It is a lot more about brand expression and brand aspiration,” she said. Geri Schachner, senior vice president of global communications at Estée Lauder, explained, “We want to reach out to more women than currently come to esteelauder.com. We want to tap into her audience and merge her audience with ours.”

Schuman’s audience is an educated and engaged group of 18- to 44-year-olds who visit Cupcakes and Cashmere 100,000-plus times per day. Schachner believes through Schuman that audience will learn how Estée Lauder suits their lifestyle, just as Schuman has come to realize. Estée Lauder has placed a banner ad on Cupcakes and Cashmere that can be clicked to go to the Lauder site. “When I initially thought of Estée Lauder, I thought it skewed a little older. I had known the brand because both my mom and grandma had been using it for years. As soon as I started using the products, my perception shifted,” said Schuman.

But Schuman knows the partnership with Estée Lauder will fail if it rings inauthentic, and she stressed the content on esteelauder.com won’t differ too much from what’s on Cupcakes and Cashmere. “They are showcasing my views. The readership that I have gotten is because people really feel as if they know me,” said Schuman. “In a sense, I make myself vulnerable. I put out so much of my life, and I put so much into it. The difference with a celebrity is they aren’t as transparent with their lives, and it is not as easy to relate to that. That is one of the things that blogs do so well, they are relatable.”

Although she’s selective about the brands she does deals with, Schuman has seen how those deals can benefit brands. When she designed a bag with Coach in 2010, it sold out immediately. That success demonstrates the power of her brand and its capacity to extend beyond the blog. She has her first book due out in August, published by Abrams and titled “Cupcakes and Cashmere: A Design Guide for Defining Your Style, Reinventing Your Space, and Entertaining with Ease,” and she is in talks to test television.

Schuman concluded, “What I’m trying to do with Estée Lauder is showing how it is really fashion forward and lively and appeals to this modern woman.”