Editor-in-chief Barbara Fairchild will leave Bon Appétit magazine, which is moving its offices to New York. 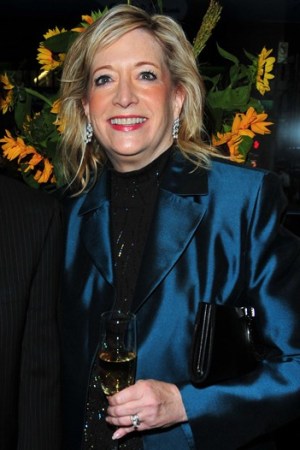 PLAY IT AGAIN, CHUCK: Condé Nast likely triggered a few cases of déjà vu on Monday when the company said it will move the editorial operations of Bon Appétit from Los Angeles to New York, as it had with Architectural Digest in June, and that it will do so minus a longtime editor…as it had with Architectural Digest in June. Barbara Fairchild, a 32-year veteran of the food title and its editor in chief for the last decade, will leave the magazine after it completes the cross-country trek later this year. However, unlike Architectural Digest’s Paige Rense Noland, who retired, Condé Nast said Fairchild is moving on to pursue the proverbial “other opportunities.” A company spokeswoman said Fairchild, who is bicoastal, was unable to commit to a full-time move to New York when approached last week. (Whatever the case, the parting couldn’t have been too chilly, since the magazine publisher said some of those opportunities may come with Condé Nast.) The company said it plans to name a successor after the transition to New York.

Fairchild’s farewell comes about a year after Condé Nast shuttered in-house rival Gourmet, and made Bon Appétit the future for the company in the epicurean category. Bon Appétit has performed reasonably well this year, with a 6.5 percent gain in ad pages to 489.6 through October, according to Media Industry Newsletter. But the title has also seen increased competition from the upstart Food Network Magazine. In little more than a year of full-fledged existence, the Hearst Magazines and Scripps Networks Interactive co-venture has become an instant power player in the field, and tripled its rate base to 1.25 million, by leaning heavily on its association with various Food Network personalities.

This story first appeared in the September 21, 2010 issue of WWD. Subscribe Today.

Condé Nast chief executive officer Charles Townsend was not available for comment, but said that Bon Appétit’s call home is part of the company’s effort to “strategically align our brands for future growth and to enhance efficiencies and coordination by consolidating our assets.”

Once the Bon Appétit and Architectural Digest moves are complete, all but one of the company’s U.S. magazines will be headquartered in New York. The publisher didn’t say where Bon Appétit’s new test kitchens would be exactly, but the new digs will likely be only a staging ground before the entire company’s planned 2014 move to 1 World Trade Center. Those Wired San Francisco offices may want to take heed.

CATHIE’S HANGING IN: Cathie Black is keeping her options open. As the newly appointed chairman of Hearst Magazines, she said that life is very similar to how it was as president of the division, cryptically adding that “perhaps I will go on for a long time.” Black was interviewed by Vanity Fair’s Vicky Ward at the WIE symposium at Skylight Studios in New York on Monday afternoon. Black went on to list some of the company’s most recent accomplishments, including the rise of Food Network magazine, which will turn a significant profit in its first year on newsstands. She drove home the continued success of Cosmopolitan, noting the May issue with Lady Gaga sold 1.8 million copies, and also claimed that Oprah’s move to a new TV network will be a “win-win situation” for Hearst, adding that at some point the talk-show queen will probably want to stop appearing on monthly covers but “that time hasn’t come.”

Earlier in the day, there was a fashion and philanthropically focused panel discussion with Diane von Furstenberg, Tamara Mellon, Harper’s Bazaar’s Glenda Bailey, Lauren Bush and BET co-founder Sheila Johnson, moderated by Donna Karan. Mellon said she started Jimmy Choo both out of a love of fashion and a yearning to escape a dysfunctional and alcoholic family. “I didn’t want to be looked after by a husband or a father. For me, in a sense, I knew I had to buy my freedom and this was a way to do it.” Since growing Jimmy Choo into the company it is, Mellon has worked with the Elton John AIDS Foundation on programs geared specifically toward women in Africa.

Bailey recalled overcoming the early deaths of her parents to go on to edit both Marie Claire and Harper’s Bazaar, despite having little magazine experience. “When I was in college, my mother died of cancer when I was 21,” said Bailey. “I was out of college for one year and my father contracted cancer and I gave up everything to return home and nurse him. There is nothing like losing everything to really focus on what you want.” Of her subsequent philanthropic efforts, she added, “Fashion is all about feeling good, but there is no better way of feeling good than doing good.” Donna Karan agreed, noting: “The one thing about the fashion industry is it really comes together as a whole. I think when people think about fashion, it’s not about dressing on the outside but what’s going on in the inside.” — Amy Wicks and David Lipke

OH, WE CHANGED OUR MINDS: Following months of mudslinging in both directions, Peter Brant and Stephanie Seymour have surprisingly called off their divorce. According to reports, the couple walked into a Connecticut courthouse hand in hand, telling the judge they plan to stay together. For his part, Brant, who owns Interview magazine and extensive but beleaguered newsprint operations, had accused the supermodel of drug abuse and infidelity. At stake for Brant — a reported fortune of $500 million, an impressive art collection and custody of the couple’s three children. The only question left now? How quickly can Vanity Fair turn this story around and who will be assigned the task of penning the sordid tale? — A.W.