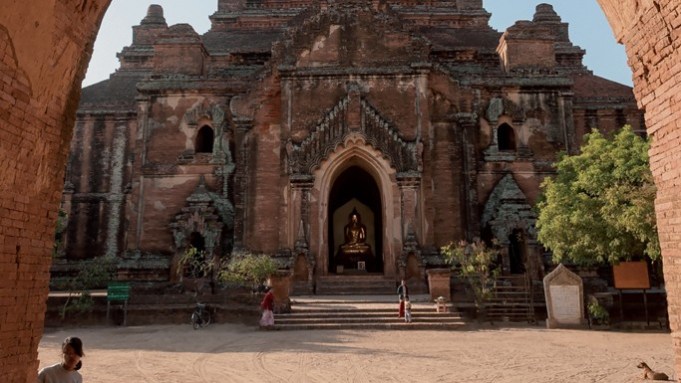 A turning point in the history of Buddhism was the creation of the Buddha’s image in the 1st century. No longer was it necessary to represent the Buddha through aniconic symbols such as the lotus, Bodhi tree, wheel and Stupa; the Buddha could now be portrayed in human form. This development of the iconic image of the Buddha, and the practice of rituals led to the conception of temples, known as ‘Caitya-grihas’. Caitya-grihas housed the Buddha image and provided the assembly with shelter. Originating from India, the architecture of these early Caitya-grihas, and even Buddhist temples today, inevitably share the vocabulary of design with the Hindu and Jain temples of India.

In their plan, form and arrangement, Buddhist temples are rarely distinguishable from Hindu and Jain temples. What sets them apart, however, is their particular iconography. The earliest architectural forms manifesting worship in Buddhism were the shrines enclosing Bodhi trees, dating to the period 175 BCE to 225 CE. These were designed for the veneration of the Bodhi tree that served as an iconic symbol for the Buddha.

Also worshipped in the Bodhigara was the Vajrasana, the stone seat that the Buddha was supposed to have been sitting on when he received enlightenment. Though no original structures of Bodhigaras have survived, their architecture can be interpreted from the numerous bas-reliefs vividly depicting the architectural form and rituals of tree worship. Eleven bas-reliefs from Bharut, Mathura, Sanchi and Amravati in India have been identified that reveal the various architectural designs of the Bodhigaras. All of them belong to the period of four centuries between 175 BCE to 225 CE and have varied plans – circular, square, apsidal and octagonal.5 The consecration of the tree and the Vajrasana was achieved by defining a sacred enclosed space called the ‘Bodh-manda’, or wisdom space, by an encircling wooden gallery. The enclosed space was open to the sky and along with the encircling wooden gallery, formed the hypaetheral temple. The gallery was raised on wooden pillars, which comprised an aerial corridor for circumambulation, or Pradakshina. The structure was constructed of wood and was designed to support the weight of several persons. The gallery was designed to serve the rituals and ceremonies, called the ‘Bodhi-maha’, associated with the worship of the Bodhi tree and the Vajrasana. . . .

Over time, temple complexes grew in size as their monumental scale was conceived to represent the idea of the cosmic mountain, Mount Sumeru.Numerous types of temples or Caitya-grihas were conceived in different cultural regions reflecting the diverse range of design ideas – in the Indic region they were built of stone or brick with a vertically rising spire; in southeast Asia, they emerged as monumental mountain-type temples; in the Sinosphere regions, they were derived from the secular wooden architecture of the region, and are developed along the horizontal plane; and in the mountain regions of the Himalayas, they adopted characteristics of fortified architecture as can be seen in the Dzongs of Bhutan. —By Vikram Lail