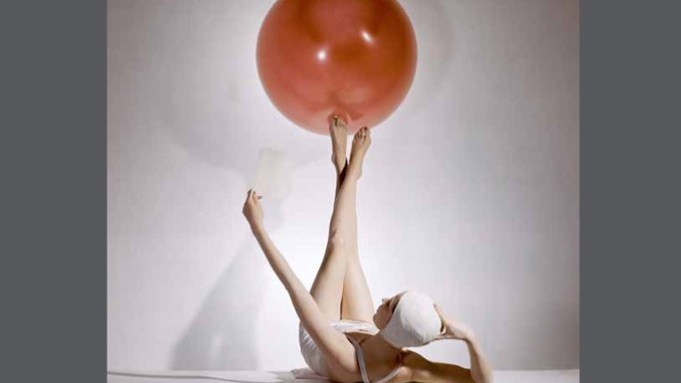 The classically inspired mood of Huene’s and Horst’s fashion photography reflected the wider preoccupations of the time, for the decorative arts in the 1930s were permeated by images and artifacts that paid homage to the ideals of Greek and Roman proportion.

Their photographic mises en scene began to resemble stage sets for a classical drama, with plinths, columns, drapery and strong overhead lighting inspired by the natural light of Greece, recorded in snapshots taken on Mediterranean trips the pair took together.

The rituals of the photographic shoot reflected this dramatic tension. Horst’s muse, the Swedish model Lisa Fonssagrives, recalled, ‘One was led from the dressing room onto a very dark, dramatic set with a column or stairway or some other Greek-inspired element, and there was silence. It was like some mystic ritual. [Huene] spoke very little and in a low voice and there was only one assistant, who moved like a cat. No one was allowed on the set in those days, not even an editor.’References to the body as part of a classical landscape also abound in editorial features from this time: ‘Close-Up of the Paris Collections’ in American Vogue, 13 March 1935, featured a Schiaparelli dress of blacked satin, ‘draped to turn you into a human column,’ with the model standing on a fluted classical pedestal, scattered with laurel leaves. Horst often embraced this visual metaphor, most memorably in his 1938 photograph of one of his favorite models, Lud, resembling a caryatid in a white jersey dress by Alix. The association with statuary was furthered by the near-nakedness of much eveningwear, with plunging backs and bare arms, while the trend for ivory, white and beige shades of satin gave the appearance of skin, or marble.

Such material qualities were further emphasized by the vogue for cutting fabric on the cross, which allowed it to stretch and cling, a technique developed and perfected by the arch-technician Madeleine Vionnet. ‘I was the first to do the bias cut…[it] was fluid, easy, promising.’ Like a sculptor, she manipulated fabric in the round: ‘You don’t only take the potentialities of a material into consideration when you’re only dealing with drawings. To do this you must work on a lay figure, and that is what I always did.’ Vionnet’s preference for plain fabrics, without any patterns to distract from the purity of the garment, was realized in jerseys, chiffons, pliable woolens and matt crepe Romaine, which could be molded to the body, and draped and fell in folds that appeared to be carved. The complexity of working with such clinging, sensual materials was informed by Vionnet’s knowledge of the contours and musculature of the human body, and her belief that ‘A woman’s muscles are the best corset one could imagine.’ Of Vionnet’s creations, Bettina Ballard (1905-61), the young Paris-based fashion editor of American Vogue, confessed, ‘The evening clothes were so statuesquely beautiful with their asymmetric necklines, their bias cut that revealed a hip and the shadow of a bust but never seemed to cling anywhere, that all I could feel was desire.’

Excerpt from “Horst: Photographer of Style” edited by Susanna Brown. Copyright (c) 2014 and reprinted by permission of Skira/Rizzoli.