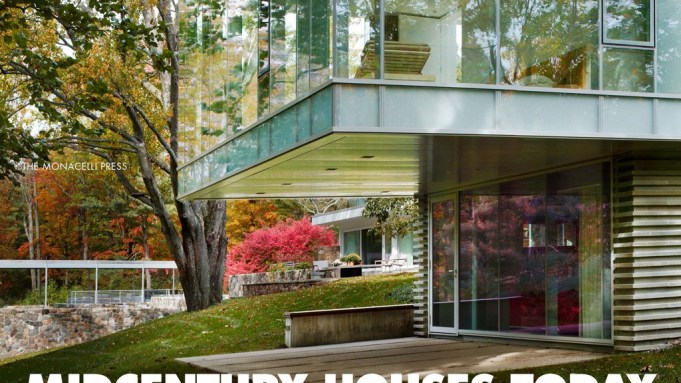 Robert C. Wiley, a developer with ambitions of building modern houses, commissioned Philip Johnson to design one for his family. Johnson chose the site, just over six acres, with an old barn on the property. The character of the landscape was akin to that of the Glass House, with a steep drop in grade, stone walls, and majestic trees.

For Johnson, the Wiley house was an extension of the design principle of the Glass House: transparency for public space juxtaposed with a solid enclosure for the private areas. From the road, the glass cube appears to float on a shallow podium. In fact, the podium is built into the slope, and an interior stair connects to the family spaces below.

Johnson called this cube the “glass prism,” and he set it at a 180-degree angle to the podium. Within the cube are the main entrance, the living/dining room, and the kitchen. A freestanding circular fireplace is a focal point of the living space. The slate floor extends onto the roof of the podium, providing terraces on two sides of the cube. The podium houses four bedrooms and a sitting room, all of which have unobstructed views of the larger landscape and access to the lawn immediately outside.

While the basic concept of transparency versus opacity is applied here and at the Glass House, Johnson explained that the experience of the space is very different: “The effect from inside—quite the opposite of my Glass House—is that of a cage.”

The vertical members on the glass facade frame a view of the barn set in a grove of hickory trees that is particularly dramatic at night. During the day awnings shade the interior.

At a respectful distance from the house, Johnson placed a circular pool near the barn and connected the complex of buildings with a rectangular walkway.

As Richard Foster, a partner of Johnson’s, observed, “The blend of forms and the sensitive use of materials are both original and successful. The wood detailing of the windows was very carefully crafted and formed an important element of design.”

After 1960 the house changed hands several times, and it stood vacant for a number of years before the current owner acquired the property in 1994. An art collector, he commissioned Johnson to design a gallery on the property, but the project was not built. The house originally had five bedrooms, but one is now used as a family/sitting room.

Working with architect Roger Ferris, the current owner has completed an extensive restoration of the main house and added new elements and enclosures to the property. The barn, once converted into a pool house, has been restored and expanded as the art gallery the owner envisioned. Ferris designed a new pool house, which is built into the landscape and hidden by a rubblestone wall that encloses a courtyard for the pool area.

According to Ferris, “This project expands the program of the original modern residence by Philip Johnson, to integrate new structures into the spectacular setting of the house with a design rooted in a respectful contextual response. The new art gallery, pool house, and garage reinforce the architectural clarity of the original glass house. The art gallery, a reconstructed nineteenth-century barn, offers a solid black contemporary counterpoint to Johnson’s transparent house. The pool house and the garage are both set into the hillside a with a single exposed wall revealing the plinth of the original house.”

Excerpt from “Midcentury Houses Today” by Lorenzo Ottaviani, Jeffrey L. Matz and Cristina A. Ross, with photographs by Michael Biondo and a foreword by John Dixon. Reprinted by permission of Monacelli Press.